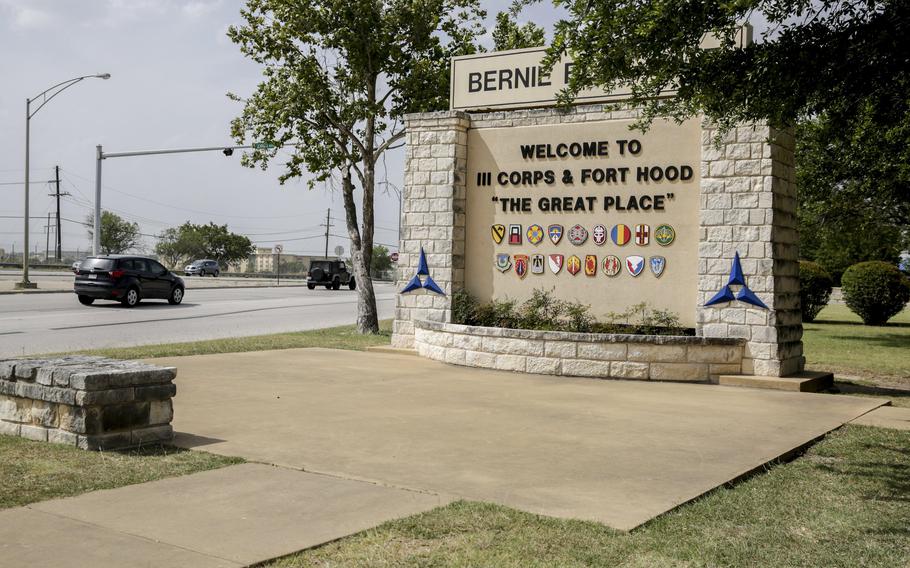 The welcome sign can be seen at the entrance of III Corps and Fort Hood in Killeen, Texas, on July 2, 2020. (Bronte Wittpenn, Austin American-Statesman/TNS)

Fort Hood on Saturday released a statement asking Texans to assist in finding Pfc. Jennifer Sewell, who had been last seen leaving her post barracks Thursday evening. The soldier’s superiors said she did not report for work Thursday, and her family and chain of command could not get in touch with her.

Sewell did not have her own vehicle, but investigators believed she had left the post willingly, according to the statement.

On Sunday, the Central Texas post released another statement saying she was found safe with extended family.

“We are in regular contact with her family and will provide any assistance she and her family may need to return to Fort Hood,” said Lt. Col. Octavia Davis, commander of Regimental Support Squadron, 3rd Cavalry Regiment.

Fort Hood was the topic of national scrutiny last year over its policies for missing soldiers and more after Guillen’s family reported the 20-year-old soldier missing in late April 2020.

The Guillen family held protests outside Fort Hood for months, demanding that Army officials better communicate with them about the search for the soldier and use more resources to find her. Their protests ended after Guillen’s remains were found by construction workers near a river in late June.

Authorities now believe fellow Army Spc. Aaron Robinson beat 20-year-old Guilen to death with a hammer in an armory room on post the morning of April 22, 2020. Robinson fatally shot himself July 1, 2020, as authorities sought to question him after finding Guillen’s remains the day before.

In the wake of the Guillen case, investigators were called in last year to take a close look at how Fort Hood leaders run the installation. Investigators found many areas where Fort Hood failed to protect soldiers, which included leaders creating a toxic environment where sexual misconduct and other violence happened frequently on post.

One of the many changes the independent investigators suggested in December was updating its policies on soldiers who are reported missing.

Christopher Swecker — a lawyer and 24-year FBI veteran who last year led the Fort Hood Independent Review Committee that investigated the post in the wake of the Guillen case — said earlier this year that during the investigation he learned that the majority of Fort Hood’s Criminal Investigation Command was made up of apprentice agents with less than three years of experience who operated without much, if any, expert oversight.

As a result, the slew of criminal investigations at Fort Hood often were incomplete, along with paperwork to back up that the agents had properly handled the cases. Swecker said it appeared that agents took a checklist approach to investigations, frequently failing to use forensics to solve crimes and allowing the expiration of phone tracking programs used in investigating crimes or searching for missing soldiers.

The lack of experienced agents is one of the reasons Guillen’s case was mishandled and why it took Army investigators months to find large amounts of blood residue in the armory room where Guillen was last known to be, according to the investigators.

Fort Hood leaders in recent months have used the new missing persons policy at least twice, both times reporting soldiers missing early on while asking the public for help in the search. Many aspects of the new policy include increased communication with the public and the soldier’s family. In both cases under the new policies, the soldiers were found safe within days.