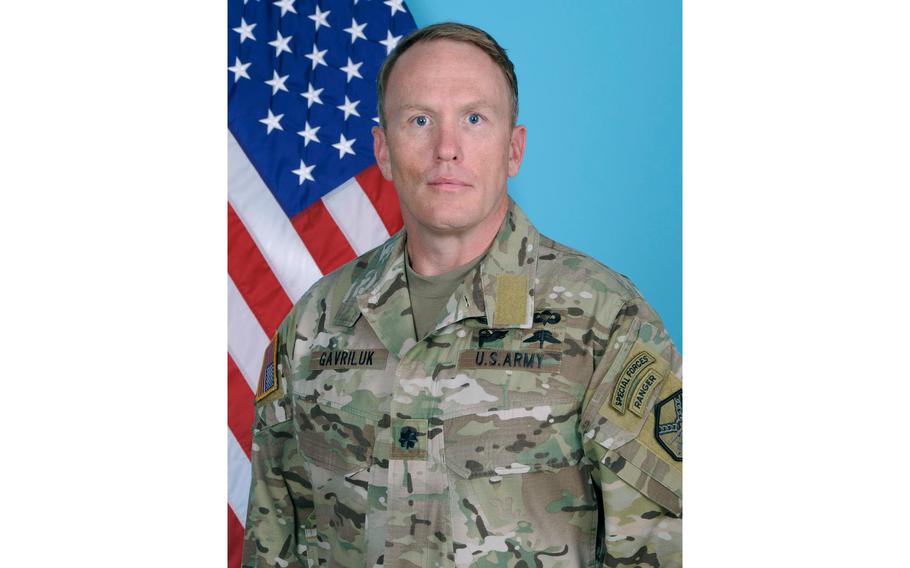 (Tribune News Service) — Retiring U.S. Army Lt. Col. Roger Gavriluk was deployed to Afghanistan in 2004, shortly after the U.S. invasion in 2001 that ousted the Taliban from power.

The former Yakima Training Center commander, who will soon retire from the U.S. Army after 28 years of service, was brought to Afghanistan as part of a special forces group in response to disputes between rival warlords Ishmael Khan and Amanullah Khan in the south of Afghanistan.

There, he was based in Shindand, an old Soviet air base that was revived as one of the largest airfields in the country. He and his 12 special forces soldiers were there to help broker a peace agreement between the two warlords, as well as conduct combat operations.

In the midst of their fighting, they were working alongside Afghan interpreters and training Afghan militia members combat techniques. Gavriluk's was the first special forces group in the area.

During his five months there, he said his key job was to develop trust with Afghan community members from elders to religious leaders. He would meet with them to talk about issues they saw in the community and how to address them. They would help build wells, paint mosques, set up generators for the mosques and "improve the quality of life of the Afghans based on our interactions with them," he said.

"It's a fine line between when you're in the middle of kissing babies and shaking hands to flipping a switch and going into combat operations if you get into a TIC," he said, using the acronym for Troops In Contact, which usually refers to firefights.

But Gavriluk said roughly 90% of his work was in building relationships. This led to community development as well as information on Taliban members, which he said community members wouldn't share with U.S. soldiers unless they trusted them.

When it was time for him to leave, his team passed the torch to a new group of soldiers, helping endear Afghan community leaders to them through the relationships they had formed.

Gavriluk said he always believed the U.S. should have sustained an advisory military presence in Afghanistan. He envisioned this as some 5,000 military maintaining a presence on the ground at a given time, primarily to offer guidance.

Instead, he said, the full removal of U.S. troops created a vacuum of power, allowing the Taliban to regain ground. He said it was almost like a replica of the Taliban's rise to power after the Soviet exit.

"These guys are the worst of the worst running the country," he said. "Just like the Soviet pullout of the mid-80s, there was a huge power vacuum. That's when the Taliban came in and filled that vacuum — that void."

While a U.S. presence could have helped prevent the Taliban's reclamation of power last week when it swept through Kabul, "at some point, they have to fight for their own country," he said of the Afghan soldiers he helped train.

But to Gavriluk, it's a complicated issue. Unlike U.S. troops like himself, Afghan soldiers never got to leave.

"I get to come back. They don't. They work with the next team and the next team. They've been doing this for decades," he said of soldiers and interpreters on the ground. He said he worries for their safety now that the Taliban is in power, since they assisted U.S. soldiers.

"They were in the trenches with us. My heart goes out to them and their families, because those are the folks on the kill list," he said.

Gaviluk said unlike political leaders in Afghanistan and their families, many of the Afghans who worked on the ground and in war zones don't have access to diplomats who can grant them visas to safer ground. He worries most about them. He also worries about Afghans' loss of liberties — like women's access to education or ability to move and dress freely — and the effect this could have on mental health or suicide.

"They were able to go to school, to college, while the U.S. was there the entire time, only to have it pulled out from under them," he said.

While the Taliban is pushing a public relations agenda that implies their rule will be different now than it was in the 1990s, Gaviluk worries that won't be the case.

"You can't teach an old dog new tricks," he said. "They know the spotlight is on them right now, but they're still committing human rights violations, and they have a kill list of people they're going to go after and are not going to be apologetic about it whatsoever."