In a California town that's home to Afghanistan veterans, grief and regret over the Taliban takeover 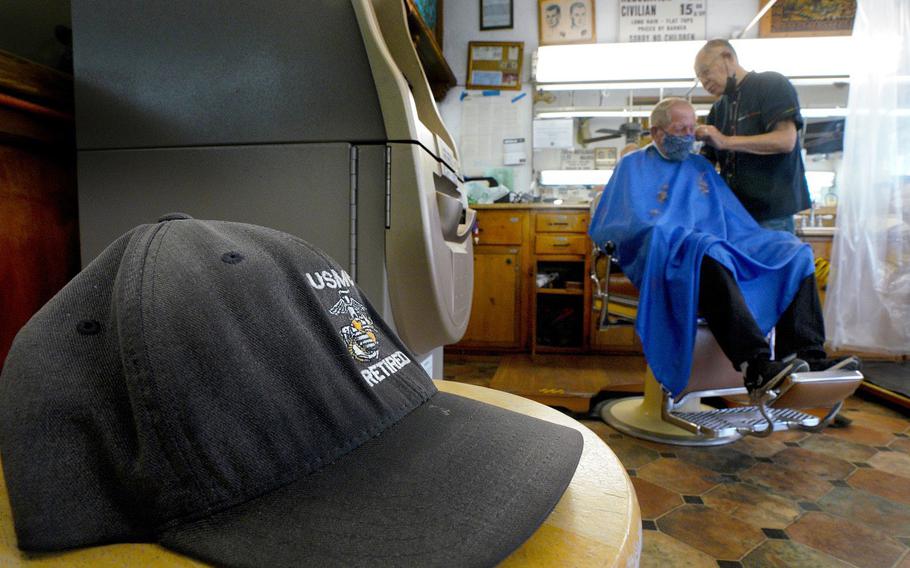 OCEANSIDE, Calif. (Tribune News Service) -- For 61 years, Johnny Gomez has sat U.S. Marines in his tan, leather swivel chair at the Esquire Barber Shop for the "high and tight": faded on the back and sides, short on the top and finished off with a straight razor. Little has changed but the price — still a bargain at $10.

Usually, customers shuffle in and out quietly, checking an errand off the to-do list in this seaside town next to Camp Pendleton, a place where the military is a way of life, replete with uniform repair and resale stores, shooting ranges and shops offering custom name tape, geared toward those in active service and veterans who have stayed on.

They've come to Esquire after the Korean War — well before Gomez buzzed his first head — where the U.S. lost more than 35,000 soldiers. It was the same after Vietnam, when the U.S. retreated after 58,000 American deaths; Gomez was drafted during that time but spent three years in the Army without deployment.

It's a pattern that continued with Iraq, as thousands of Americans died, and ISIS temporarily took over northern regions when U.S. troops left.

And now, with the Taliban's return takeover of Afghanistan.

"They're frustrated. They're angry. And they're talking," said Gomez, 84, who has seen young Marines off to their first deployments in nearly every modern conflict and welcomed them back with the "We support our troops" lettering stenciled on his barbershop's window. "They wonder what their service was for and what will happen to the Afghan people left behind."

Of the 800,000 Americans who have served in Afghanistan, some 115,000 were Marines — third in number after the Army and Air Force — and most were based at Camp Pendleton or Camp Lejeune in Jacksonville, N.C. About a fifth of the 5,200 U.S. armed service members currently in Kabul are Camp Pendleton-based Marines, tasked with carrying out President Biden's promise this week that "any American who wants to come home, we will get you home." This at the end of a war that has cost some $2 trillion and more than 2,400 military lives.

Few places in the U.S. know the triumphs and failures of war like Oceanside, a city of 175,000 that's 40 miles north of San Diego and borders Pendleton. The 200-square-mile U.S. Marine Corps base has been a mainstay of training for those sent to Afghanistan over the last two decades. Many return to this town and smaller ones near it for jobs on base and civilian life outside of it, where the military commissary, doctors and social clubs are just minutes away beyond the Pendleton gates.

The son of a bracero — a Mexican who was offered entry to the U.S. for agricultural work — Gomez got his first job repairing and shining Marines' shoes next door to where his shop is today. He was 5 when the base was built during World War II. Over the years, the once-tiny hamlet of Oceanside blossomed into a one-trade town, with shuttles regularly dropping off and picking up Marines. They got beers along Mission Avenue, haircuts at Esquire on Pier View Way and lap dances at the strip clubs — the last one remaining, on North Coast Highway, closed its doors last year.

"People come here to get away from military life for a moment, but also they are reminded of it everywhere you go, because you also want to be around people like you," said Gomez, who charges an extra $5 to civilians.

It's a place, he said, that is used to danger and death. A memorial wall at Camp Pendleton displays the names of Marines killed in Iraq and Afghanistan since Sept. 11, 2001. Some died closer to home during training, in helicopter crashes or drownings during sea assault exercises. Each summer, Pier View Way is taken over for Operation Appreciation, a fair for veterans and military families at which the fallen are honored.

It's also a place that is used to both successes and failures. For many who look with pride at the pizza-shop mural of U.S. soldiers raising the red, white and blue over Iwo Jima, the images from Kabul, by contrast, bring personal pain: the American flag lowered last week from the U.S. embassy; desperate Afghans clinging to a departing Air Force jet, one as young as 17 falling to death from the sky; bloodied bodies on the streets after anti-Taliban protests.

The current situation has made for comparisons to 1975 in Saigon — now Ho Chi Minh City — when helicopters evacuated Americans from the U.S. Embassy as the city fell to the North Vietnamese and Viet Cong. It's a symbol that still resonates for some residents of Oceanside, where a store off South Coast Highway has at times posted a sign that says "Not Fonda Jane," a reference to Jane Fonda's outspoken opposition to the Vietnam War.

"It's all the same as every time before," said Peyton Cooper, 57, a regular at Esquire who came in last week for a cut. Cooper, who lives in the nearby city of Vista, served as a paratrooper in the Army based in Fort Bragg, N.C., during the more successful U.S. invasion of Grenada in 1983, though he was never sent abroad. "I don't think Afghanistan will ever change. It's like, Americans keep going in thinking they can fix places but don't."

Retired Staff Sgt. Bret Olson, an Oceanside resident and former Marine who did multiple tours in Iraq and worked in helicopter repair and maintenance for 20 years before retiring from the corps in 2005, had a different take.

"When there is a disaster like in Afghanistan, it just really hits everyone," said Olson, 62, who was not deployed there but knew many who were and is now a civilian helicopter mechanic on base and a local American Legion commander. "It's somber and sad. Some of us just try not to talk about it," Olson said.

Still, he believed it wasn't his role to place blame. "Our jobs are to obey orders, to do what the president and our leaders want, and deal with the repercussions."

Americans invaded Afghanistan after Sept. 11, 2001, attacks on the U.S. by the terror group Al Qaeda. The goal of dismantling Al Qaeda and the Islamist extremist Taliban government for having given the group cover morphed into a democracy-building mission. Navy SEALs killed the Al Qaeda leader, Osama bin Laden, a decade later in Pakistan. The Taliban, which global leaders had scorned for depriving women's rights, fled to the hinterlands and waged brutal attacks against Afghan forces, local officials and the U.S. troops that bolstered the new Afghan government.

Last year, former President Trump ordered American negotiators to sit down with the Taliban in Doha, Qatar, to hammer out an agreement for the U.S. to withdraw from Afghanistan in May 2021 and for the Taliban to vow to never harbor terrorists.

When President Biden took office, he delayed the full withdrawal until September. As the final 2,500 troops were departing this month, the Taliban quickly retook control as Afghanistan's president fled and its U.S.-trained Army collapsed. Amid the chaos, foreigners, Afghan troops and translators who assisted the U.S. are scrambling to escape. Biden has dispatched thousands of troops, including some from Pendleton, back to the country to guard the airport amid evacuations, drawing comparisons to Vietnam.

The younger Afghanistan war veterans who enlisted out of high school, now in their late 30s, weren't alive for the era of Vietnam War protests and soul-searching over the meaning of military enlistment. But many interviewed said they, too, had questions about the value of their service in protecting Afghans and in fighting for America's stated mission abroad.

"I know a lot of good people that got killed over there. They did their jobs. I did my job. But the politicians just screw it up," said retired Staff Sgt. Jason Ross, 37, who joined the Marines after the Sept. 11 attacks and was tasked with disabling improvised explosive devices. His legs blown off in 2011 in Nahri Saraj, Afghanistan, he moves around in an automated wheelchair.

"I am changed forever. What was it all for?" asked Ross, who lives in Fallbrook, a city on the northeast side of Camp Pendleton. "I feel like the guys on the ground did all they could. But the leadership of this country did not."

Neither did the Afghan forces, he said, which the U.S. government wrongly stated could withstand the Taliban.

Ross avoids watching the news these days, saying he is afraid his mind "will go back into a dark place." Instead, he sends Facebook memes on the war to fellow veterans as a way to cope through humor. A Marines flag flies next to the American flag on a pole outside his home, visible from the military helicopters that regularly speed overhead.

A friend who lives down the street, retired Gunnery Sgt. Ernesto Aquino, has had similar thoughts, as sleep becomes more difficult with each harrowing TV image from Kabul.

Aquino, 44, did three tours in Iraq and two in Afghanistan over 20 years in the Marines. His last assignment was at Camp Leatherneck, the former American base in Afghanistan's Helmand province, where he shipped U.S. military property out of the country. In 2012, he tumbled in a rolling armored truck during a training exercise. After temporarily needing a wheelchair, he now lives with a traumatic brain injury and post-traumatic stress disorder.

After departing Afghanistan, he moved to Oceanside and took woodturning classes as a means of therapy, joining wounded veterans on the base to carve pens and salad bowls from cherry. Usually, it took him a few days for each piece. After retiring in 2015, he enrolled in cybersecurity classes at Cal State San Marcos, with plans to graduate next year, and thought he was moving on from the days of war.

But Aquino, who five years ago bought a home in Fallbrook to be in a quieter area with more land, said his anxiety has returned.

When he saw images of Taliban fighters in Kabul — their white flags with black swords, Kalashnikov AK-47s and photo ops in the presidential palace — he logged off from social media, turned off the news and retreated to his garage to turn wood. Closing himself off from what was happening across the globe, he created four bowls in a matter of hours.

It was a small way of finding peace amid the frustration and fear.

"I care. I try to watch and keep up with what's happening. But I get aggravated," Aquino said. "Sometimes I wish I could go back in, but I am disabled. I can do little from here. What, really, can any of us do?"