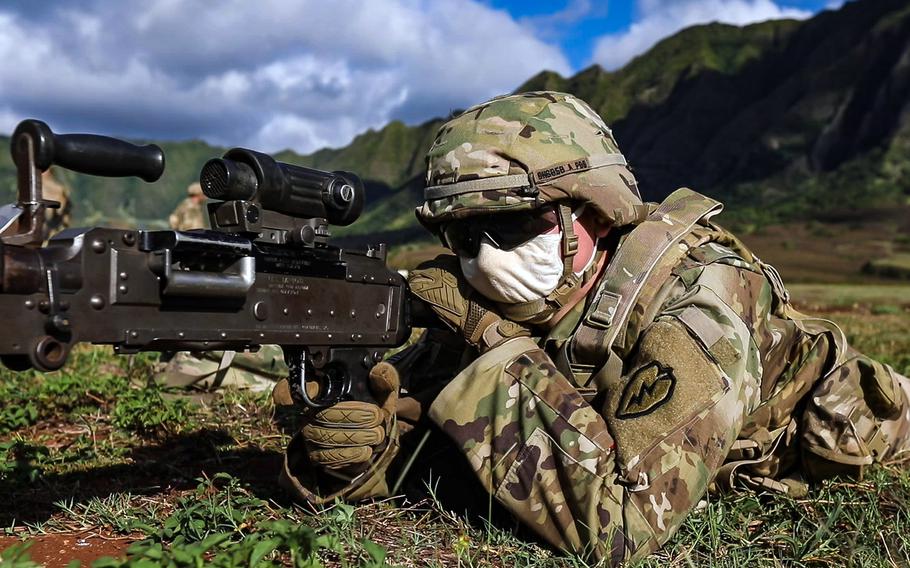 A soldier with the 25th Infantry Division looks down the sight of an M240B machine gun during a joint artillery mission at Makua Military Reservation, Hawaii, Aug. 11, 2020. (Effie Mahugh/U.S. Army)

WAIALUA, Hawaii (Tribune News Service) — Some in opposition to the Army's proposed retention of 6,300 acres of state leased land for training on Oahu are taking it to the street as 65-year leases run out in 2029 and are now up for reconsideration.

Several members of Waianae Coast community group Malama Makua gathered Wednesday at the gates of Makua Military Reservation to voice their displeasure with the Army land use.

"The military during its illegal tenure over this land has utilized this aina for live-fire bombings and other destructive practices destroying sacred Hawaiian sites as well as polluting these unique places, " the group said in a release. At Makua and across the islands, "the military has proven itself to be incapable of responsible environmental or cultural stewardship."

With focus on the Indo-Pacific as the Pentagon's "priority theater," the Army is trying to keep nearly 30,000 acres of training lands on Hawaii island and Oahu. The state land leases all expire in 2029.

The total is about a third of the 18,060 acres of U.S. government and state-owned training lands at the three Oahu sites.

Last year, the Army said it was preparing an EIS to consider retaining 23,000 acres in the middle of Pohakuloa Training Area on Hawaii island, a training range the military maintains is critical for readiness in the Pacific. The tract connects to 110,000 acres of adjacent U.S. government-¬owned land on either side.

Hawaii, with its abundance of natural beauty and ongoing issues of Native Hawaiian rights, remains very conflicted about a more than 100-year U.S. military presence. Tourism and the military drive the state's economy.

The Army has preserved much of 4,190-acre Makua Valley while previously bombing portions of it. No live fire has been conducted in the valley since 2004 as the result of environmental lawsuits.

The U.S. Army "has controlled these lands for 65 years at no cost, and in that time, has abused and desecrated this aina," Malama Makua said, using the Hawaiian word for "land."

The group said it is opposed to re-leasing of the lands to the Army.

"We call upon the state to deny any new leases, and we call upon the U.S. Army Garrison Hawaii to begin working on a plan to return these lands and properly fund their clean up and restoration," Malama Makua said.

"Malama Makua stands firm in opposing war and preparation for war at the expense of the aina and the people of the aina. At this time in history, war is an outmoded way to settle grievances. Moreover, pre-paration for never-ending war causes irreparable harm to our social and natural resources," said group member Lynette Cruz.

The Army said in 2020 that it annually spends more than $12 million in Hawaii on environmental programs. Its natural resources program helped save three native plant species from extinction: the haha, Hawaiian mint and tree aster, officials said.