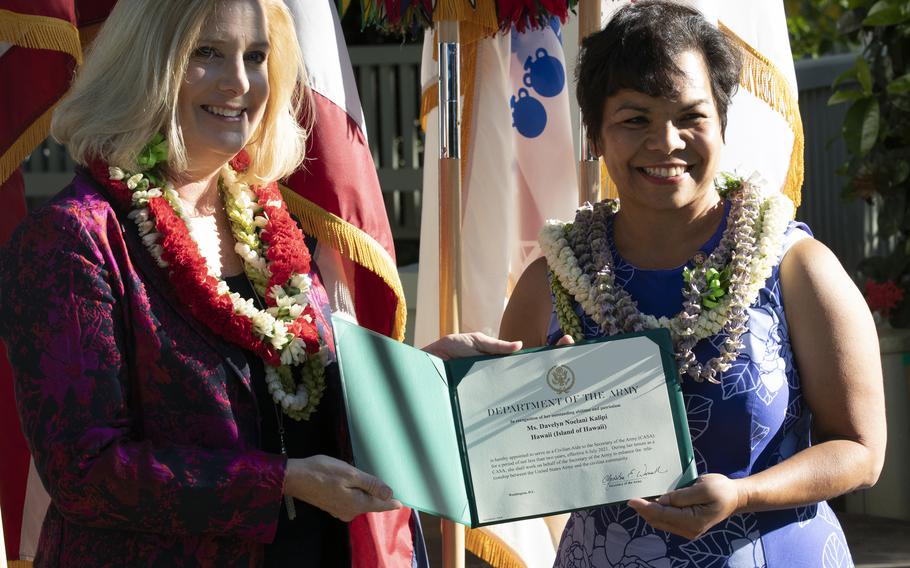 HONOLULU (Tribune News Service) — The first woman to hold the position of secretary of the Army said Monday that Hawaii serves as an increasingly critical outpost in a world where China's rising military has elevated the Indo-Pacific region as a priority theater.

And just as important are the Army's training grounds, a source of controversy over many decades in Hawaii, but which face lease renewals within the decade.

"The training that the land here offers to the Army and to the broader joint forces is incredibly important, " said Christine Wormuth, who is visiting Hawaii for the first time since being confirmed by the U.S. Senate in June as the 25th secretary of the Army.

Wormuth was visiting Oahu on Monday as part of a three-state tour where she also will visit installations in Washington state and Alaska. She landed here Sunday and is scheduled to leave today.

While on Oahu, Wormuth received briefings from senior leaders, visited Army facilities and took a helicopter tour of military installations across the island.

On Monday evening she presided over the investiture ceremony of Noelani Kalipi of Hilo, who was selected as a civilian aide to the secretary of the Army, one of two people in the state who act as a liaison between the Army and the civilian population. The other CASA, as they are known, is Gilbert Tam of Honolulu.

The Army has started to work on trying to keep nearly 30,000 acres of its training lands in Hawaii, including controversial outposts such as Makua Military Reservation on Oahu and Pohakuloa Training Area on Hawaii island.

State land leases all expire in 2029.

In an interview with the Honolulu Star-Advertiser, Wormuth said the Army is looking to find a way to renew the leases in a way that lets the training continue while addressing community concerns.

"We absolutely want to be respectful of local community concerns and Native Hawaiian concerns and want to make sure we are listening to those and trying to address them the best we can, " she said.

"Part of the importance of having a CASA like Ms. Kalipi is that she provides us with a very tuned-in, if you will, eyes and ears to help us with those concerns, and to be better able to understand those concerns and address those concerns, " she said.

The total is about a third of the 18,060 acres of U.S. government-and state-owned training lands at the three Oahu sites.

Last year the Army said it was preparing an EIS to consider retaining 23,000 acres in the middle of Pohakuloa, a training range the service maintains is critical for military readiness in the Pacific. The tract connects to 110,000 acres of adjacent U.S. government-¬owned land on either side.

But the Army is likely to run into opposition from Native Hawaiian and environmental groups that say the training desecrates the land, hurts the environment and pushes militarization where it's not wanted.

Wormuth, a former undersecretary of defense, said the Army isn't the only branch training in Hawaii. In fact, the beauty of Hawaii, she said, is the ability for the different branches to train together and show the Chinese what a joint force can do.

"Our ability to demonstrate that we can operate as a joint force has a more deterrent value than if we just operate service by serv¬ice, " Wormuth said.

Kalipi, a Big Island consultant, was a former aide to U.S. Sen. Daniel Akaka and an Army officer.