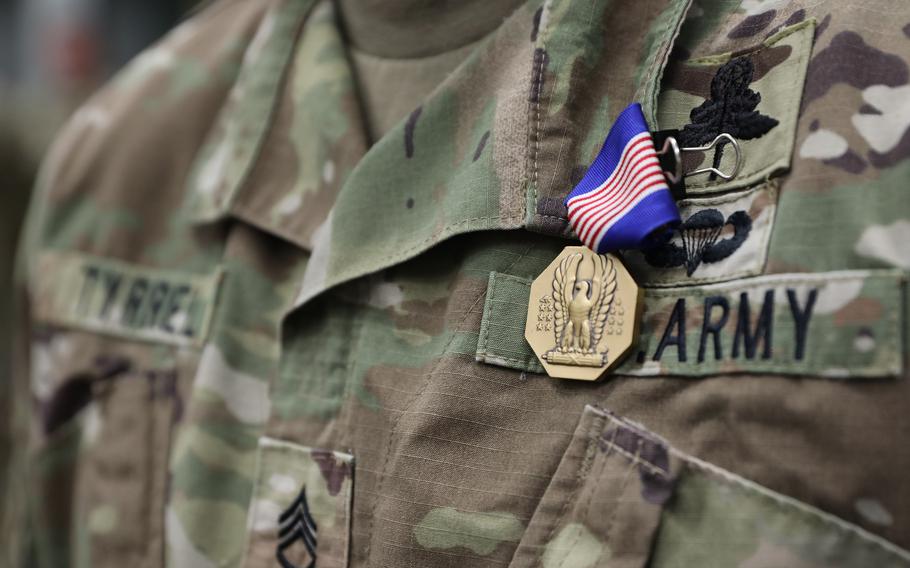 Sgt. Ian Tyrrel receives the Soldier’s Medal for heroism on July 14, 2021, at Fort Campbell, Ky. Tyrrel was awarded the medal for saving an injured woman's life on what was supposed to be a relaxing kayak trip on Tennessee’s Red River. (Daniel Mariscal/U.S. Army)

A Special Forces medical sergeant was awarded the Soldier’s Medal for saving an injured woman’s life on what was supposed to be a relaxing kayak trip on Tennessee’s Red River.

The medal was pinned to Staff Sgt. Ian Tyrrel’s chest July 14 by Maj. Gen. John W. Brennan Jr., commanding general of 1st Special Forces Command (Airborne), the 5th Special Forces Group (Airborne) said in a statement. It’s the service’s highest award for bravery at the risk of one’s own life outside of combat.

“One of the great things we get to do is recognize bravery,” Brennan said during a ceremony at the Deeks Language Lab on Fort Campbell, Ky. “It’s common to recognize our Soldiers in a combat zone, but what Staff Sgt. Tyrrel did is not common.”

Tyrrel had recently arrived at Fort Campbell in August 2019, his first duty station after completing the Special Forces Selection and Assessment course, when he and a friend decided to take a trip to Port Royal State Historic Park, the statement said. The park is several miles east of Clarksville, Tenn.

At one point during the day, they noticed a commotion in the water and saw a woman drowning. Tyrrel and his friend dove into the river and pulled her ashore.

Tyrrel determined she'd broken her leg when the current pulled her underwater. But a first responder who came to the scene didn’t have any of the equipment he needed to treat the injury, he said.

They were in a remote part of the river that was difficult for emergency medical services to reach. Sgt. Ian Tyrrel receives the Soldier’s Medal for heroism, July 14, 2021, at Fort Campbell, Ky. Tyrrel was awarded the medal for saving an injured woman from drowning, on what was supposed to be a relaxing kayak trip on Tennessee’s Red River. (Daniel Mariscal/U.S. Army)

“The only thing I could find to make an improvised splint was the oar,” Tyrrel said. He snapped it and fashioned it into a makeshift leg brace.

He continued to care for the woman until she could be loaded onto a life raft. He then helped get the raft through the rapids to an evacuation point, the statement said.

“He didn’t think about it,” Brennan said. “His training kicked in and he did what comes naturally.”

Tyrrel was humble about what he did, the general said, and “very taken aback by all the doings with the Soldier’s Medal.”

“But he deserves it,” Brennan said. “I cannot be more proud of him.”

Anybody else would have done the same thing, said Tyrrel, who is assigned to 5th Group’s Bravo Company, 1st Battalion.