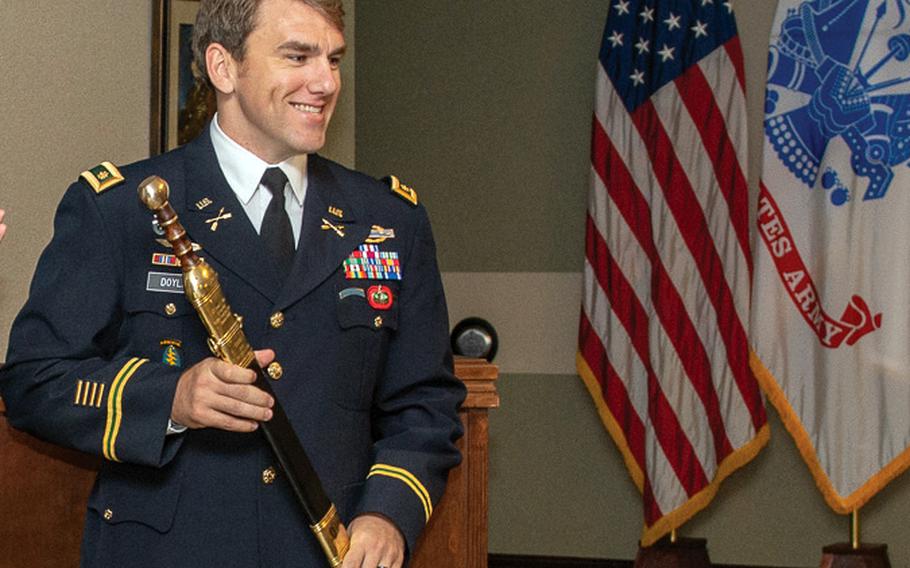 Maj. William J. Doyle receiving the Lt. Col. Ronald C. Ward Distinguished Special Operations Forces Student Award for the Command and General Staff Officer Course class of 2018 in a ceremony at Fort Leavenworth, Kan. As a captain, Doyle was instrumental in a brutal fight to retake an al-Shabab stronghold in Somalia in 2015, for which he was awarded the Silver Star. (Dan Neal/U.S. Army)

An Army Green Beret was instrumental in retaking a key al-Shabab stronghold during a brutal firefight six years ago, newly released records of his Silver Star award reveal.

When Somali soldiers, backed by Kenyan forces, retook the town of Baardheere west of Mogadishu in July 2015, they said they met no resistance. But U.S. Army records detail a harrowing battle against a “prepared, determined and numerically superior enemy” and provide a rare glimpse into combat involving U.S. ground troops in Somalia.

“Under significant enemy fire,” Capt. William Doyle of the Colorado-based 10th Special Forces Group (Airborne) demonstrated courage and leadership that “undoubtedly saved the lives of eight [U.S. special operations troops] and resulted in the liberation of Baardheere,” said a narrative accompanying the Silver Star awarded in 2018.

Doyle’s name was redacted from the narrative, released under the Freedom of Information Act and provided to Stars and Stripes this week. His name appears on a related award certificate and a public list of Army Silver Star recipients since 9/11, but details of where and how he earned the medal do not appear to have been previously disclosed.

U.S. forces have been assisting Somali troops in their battle against al-Shabab militants aligned with al-Qaida since at least 2013. Earlier this year, the Pentagon pulled hundreds of troops from the country, but U.S. Africa Command still conducts training on a rotational basis.

In 2015, Doyle was serving with an unidentified Operational Detachment-Alpha, or A-Team, advising Kenya Defense Forces tasked with retaking Baardheere, which militants had held since 2009, the award records show.

They were to advance through the Jungal Valley, a bushy, uninhabited lowland in the southern state of Jubaland. The surrounding hills make for good observation points and firing positions, Kenya’s The Star newspaper reported in 2020, citing a Kenyan army officer's description of the mission, codenamed Operation Piga Jangili.

“The valley offers natural blocking positions and has been used in past battles to thwart movement to and from [Baardheere],” Col. Seif Rashid, who served in the African Union’s forces in Somalia, said in the book “The Soldiers’ Legacy.” Chokepoints along the winding route were ideal for ambushes.

Under repeated assaults on July 21, 2015, the advancing forces fought a ferocious six-hour firefight against an estimated 175 to 200 well-armed fighters, the U.S. Army narrative states.

“Upon entering the kill zones, the enemy engaged the convoy with several [roadside bomb] initiated ambushes that triggered delays in convoy movement and killed and wounded multiple KDF soldiers,” it says.

After the initial contact, Doyle and his team’s medical sergeant sprinted over 50 yards to the Kenyan commander’s position while taking enemy fire from within about 80 feet, it says. Doyle coordinated a medical evacuation and aid for the wounded, then worked out a maneuver plan to ensure they didn’t lose the initiative.

“He repeatedly displayed tremendous gallantry in action by exposing himself to effective fire so he could ... keep the KDF convoy moving through the valley,” the narrative states. The award paperwork credits his actions with contributing to 173 enemy killed and 60 more wounded, while saving “countless” partner forces.

Baardheere fell the following day. Al-Shabab militants fled the city for tactical reasons, a spokesman for the group told Voice of America at the time. The group has been battling Somalia’s government for over a decade.

Doyle is a 2007 graduate of the Virginia Military Institute. He deployed to Afghanistan in 2009 before joining the Special Forces and receiving orders to 10th Group in 2013, the U.S. Army Command and General Staff College Foundation said in an announcement. It named him a distinguished student at the college’s officer course just weeks after he received the Silver Star.