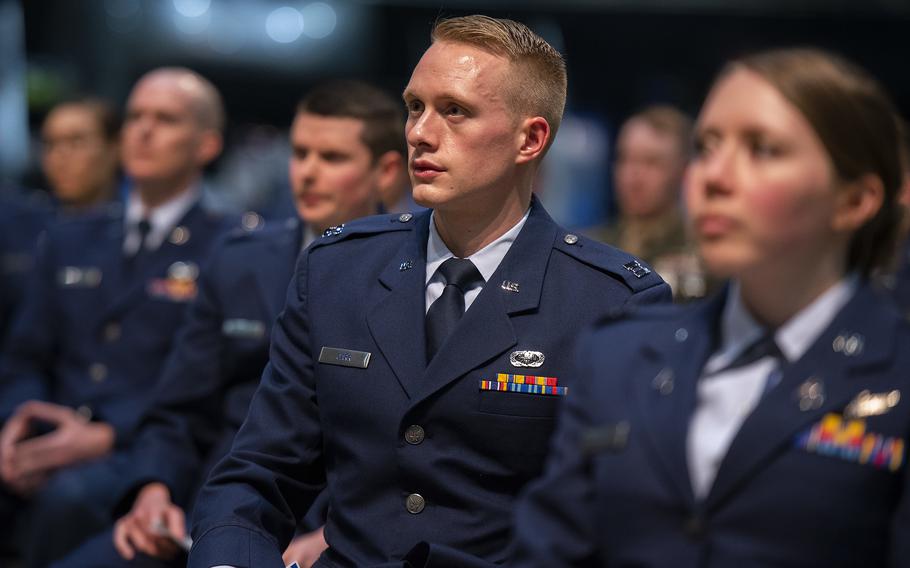 Capt. Charles Carr listens with his classmates as Air Force Secretary Frank Kendall speaks at the Air Force Institute of Technology graduation March 24, 2022, at Wright-Patterson Air Force Base in Ohio. In late December, Kendall announced that the service will once again consider advanced academic degrees when selecting officers for promotion to the ranks of major and lieutenant colonel. (R.J. Oriez/U.S.Air Force)

The service announced Friday that it will no longer exclude advanced academic degrees from promotion boards for the ranks of major and lieutenant colonel.

The change, which took effect Sunday, will allow promotion officials to consider officers’ education in the selection process.

Board members will be instructed to “understand and appreciate the value of specific advanced academic degrees, military training and operational experience,” Air Force Secretary Frank Kendall wrote in a letter to airmen Thursday.

“I do not believe that ... we should hide the acquisition of valued expertise from promotion boards for any rank,” Kendall wrote.

He said the change is necessary to ensure military competitiveness with other countries, particularly China and Russia.

Graduate degrees started being excluded from view for promotion boards in late 2014 but remained a requirement for promotion to colonel. Air Force Secretary Frank Kendall speaks during the Air Force Institute of Technology graduation ceremony at Wright-Patterson Air Force Base in Ohio, on March 24, 2022. The service again will consider advanced academic degrees when reviewing captains and majors for promotion to the next grade. (R.J. Oriez/U.S.Air Force)

Gen. Mark Welsh, who was the Air Force’s chief of staff at that time, said then that “job performance is the most important factor when evaluating an officer for promotion.”

Welsh also said the intention of the 2014 decision was to “give time back” to officers by removing the unwritten expectation that captains and majors should earn master’s or doctoral degrees to ensure competitive promotion consideration.

The reversal comes a year after an Air Force decision to allow officers to opt out of a promotion cycle in certain circumstances, such as to attend graduate education programs and career-broadening assignments.

Kendall emphasized that advanced degrees are not a requirement or a guarantee of promotion and that experience and high performance will continue to be valued by the service.

Kendall also stressed that officers should not pursue advanced degrees solely to impress a promotion board or “check a perceived box.”

“Advanced degrees should be chosen to meet personal and professional goals, with an appreciation of the value the specific degree has to the Department of the Air Force,” he wrote.

Eligible officers will be contacted ahead of promotion boards to ensure that they are aware of the change and receive guidance on the factors board members will consider, the service said Friday.