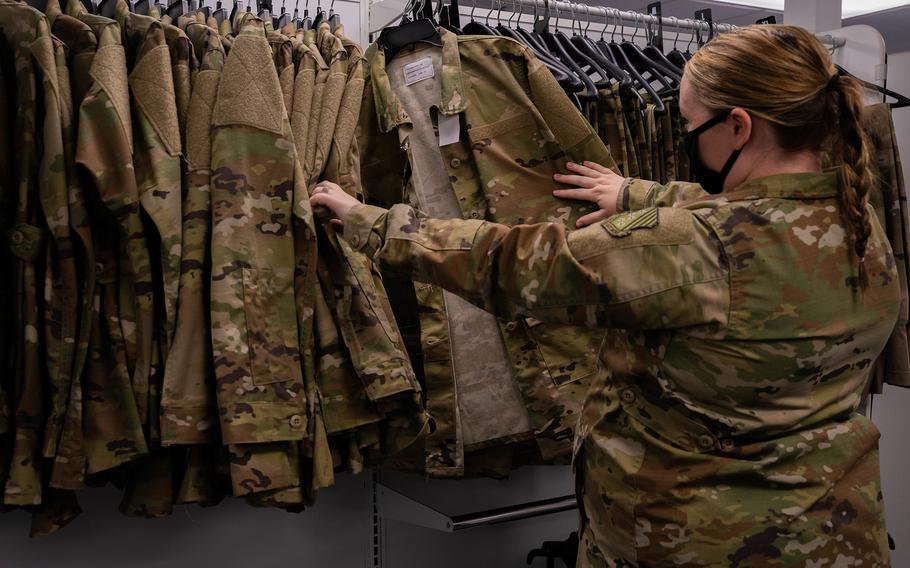 But it is the first in which she’s able to easily find a maternity uniform that fits and is issued to her temporarily at no cost.

Halferty, director of operations at the 730th Air Mobility Squadron, is one of the first women stationed at Yokota Air Base to take advantage of the new Maternity Uniform Pilot Program, or “Rent the Camo.”

“I know what it means, from almost a historical standpoint, the fact that other people fought for something to be changed in how we get issued maternity uniforms,” Halferty, 35, of Los Angeles, told Stars and Stripes on Dec. 23.

Yokota on Oct. 1 became one of the first Air Force installations to launch “Rent the Camo.”

Halferty, now in her third trimester, said this is her third pregnancy in the Air Force.

“Receiving uniforms was left to the individual to figure out where to get them,” Halferty said. “And there has been a shortage of uniforms in the past. So, I know with my first two pregnancies, scrounging for uniforms was something real.”

For “Rent the Camo” the unit first sergeant serves as the focal point between the member in need and the Central Issue Facility, which for Yokota is about 25 miles away at Camp Zama, the headquarters of U.S. Army Japan. There is paperwork involved and the pregnant service member needs a sign-off from the medical group certifying she’s pregnant.

Halferty approached her first sergeant, Master Sgt. Travis Parton, in October after she learned about the new program; she picked up her uniform items at Zama on Nov. 22.

“This program is generally important because it should resolve availability issues for all uniform items/pregnant members,” Parton, 38, of Baltimore, told Stars and Stripes through email Wednesday. “However, the best feature is that it now applies to all active-duty members whereas the previous allotment was only authorized for Enlisted service members. There may be income differences between our officer and enlisted corps, but it’s great to see the military taking care of our pregnant service members regardless of their pay grade.”

Each member will be issued three sets of maternity operational camouflage-pattern uniforms, which include three trousers and three blouses. Members must return their uniforms no later than the last day of the seventh month post-partum.

“This is something that enables us to be part of the team and taking us in consideration of that we bring something different, as females we give birth,” Halferty said. “You know, it is an additional element that we have in our society. And it’s inclusive in a sense, it’s an additional thought to who we are and how we’re part of the force.”