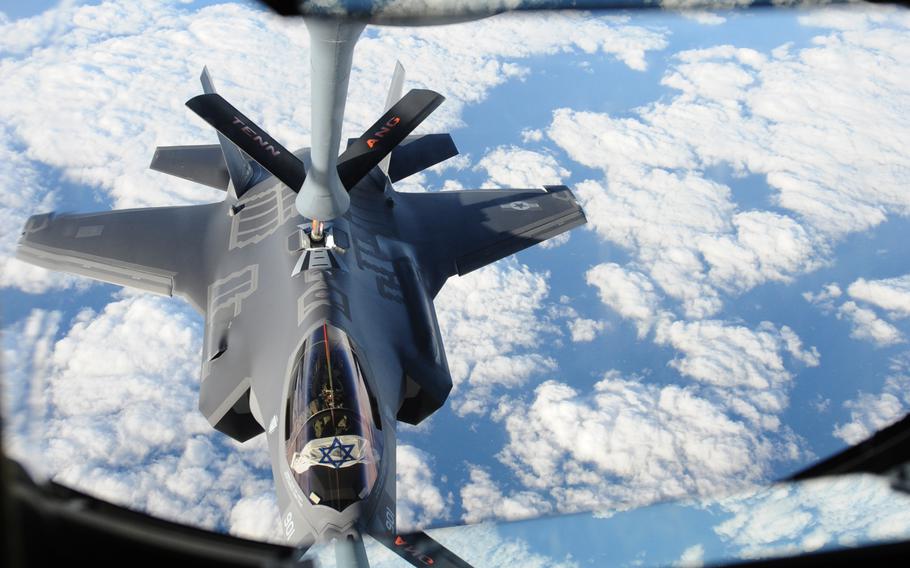 An Israeli F-35 “Adir” receives fuel from a Tennessee Air National Guard KC-135 as the aircraft make the flight across the Atlantic in 2016. (U.S. Air Force)

WASHINGTON — The air forces for the U.S. and Israel on Tuesday started a three-day joint exercise in the skies over the Mediterranean Sea and Israel to train for potential threats in the Middle East, defense officials for both countries said.

“Fighter jets and refuelers from the [Israeli Air Force] and the U.S. Air Force will take part in the exercise and simulate a number of scenarios in the face of regional threats,” the Israel Defense Forces said in a statement.

“They are exercising fighter escort and aerial refueling,” said Brig. Gen. Pat Ryder, the Pentagon spokesman. “This is a long-planned exercise and it’s also not something that’s unusual.”

The training comes at a time of heightened tensions between Iran and the West sparked by deadly anti-government protests in the Islamic nation over women’s rights. Relations between the U.S. and Iran have been tense for more than four decades since Iranian militants captured the U.S. Embassy in Tehran and held more than 50 Americans hostage.

The military training exercise also coincided with a World Cup match Tuesday between the U.S. and Iranian soccer teams — and ongoing questions about whether the U.S. will rejoin the 2015 Joint Comprehensive Plan of Action, known casually as the Iran nuclear deal. The U.S. team won the match 1-0.

The U.S. and several other nations created the JCPOA, which agreed to lift economic sanctions against Iran in exchange for Iran’s pledge that it wouldn’t seek nuclear weapons. As part of the deal, U.N. inspectors would verify that Iran was holding up its end of the bargain.

Former President Donald Trump abandoned the nuclear deal when he took office, but President Joe Biden has said he wants to resurrect it. However, the U.S. has yet to rejoin the seven-nation pact.