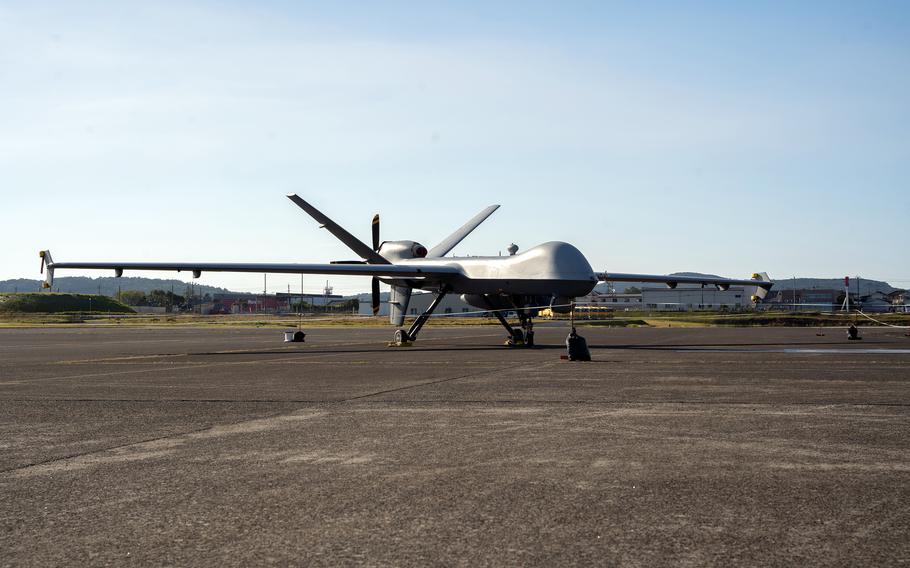 YOKOTA AIR BASE, Japan — The Air Force has expressed sympathy for a Japanese high school girl struck by a U.S. airman’s car days before his newly formed drone squadron began operating from her city on Kyushu island.

The student, 18, suffered injuries to her wrists and knees in the accident Friday at an intersection in Kanoya city, local media reported. A Kanoya police spokesman declined to provide information about the accident by phone Monday.

The unidentified airman involved in the accident is a member of the 319th Expeditionary Reconnaissance Squadron, according to a statement emailed Monday by 1st Lt. Danny Rangel, a spokesman for the 374th Airlift Wing at Yokota in western Tokyo.

Eight Air Force MQ-9 Reaper drones and more than 150 airmen began a yearlong deployment to Japan’s Kanoya Air Base last month. The Air Force flew one of the drones for Japanese officials on Nov. 5 amid locals’ safety concerns.

“We express our deepest sympathies for the member of our local community who suffered injuries in relation to this incident and we sincerely hope for their speedy recovery,” the Air Force statement said. “We will continue to engage with local leaders to maintain the strong communication and partnership necessary to ensure the safety of our entire community.”

Accidents and incidents caused by U.S. military personnel “threaten the safety of the citizens and are extremely regrettable,” Kanoya Mayor Shigeru Nakanishi wrote Friday in a letter to the drone squadron’s commander, Lt. Col. Alexander Kelly.

“Accidents and incidents caused by people related to U.S. Forces should never happen as it could greatly ruin citizens’ trust in the temporary deployment of MQ-9s and its squadron,” said the letter, which was also posted on the city’s website.

Nakanishi, in his letter, called on Kelly to instruct and educate his personnel. The mayor sent a similar letter to the Kyushu Defense Bureau, a regional arm of the Japan Ministry of Defense.

The Reapers were due to begin flying missions on Monday, according to a Kyushu Defense Bureau spokesman. Japanese officials typically speak to the media on the condition of anonymity.

The Reapers at Kanoya are configured for surveillance and “can’t be equipped with weapons,” according to a document from Japan’s Ministry of Defense posted on Kanoya city’s website.