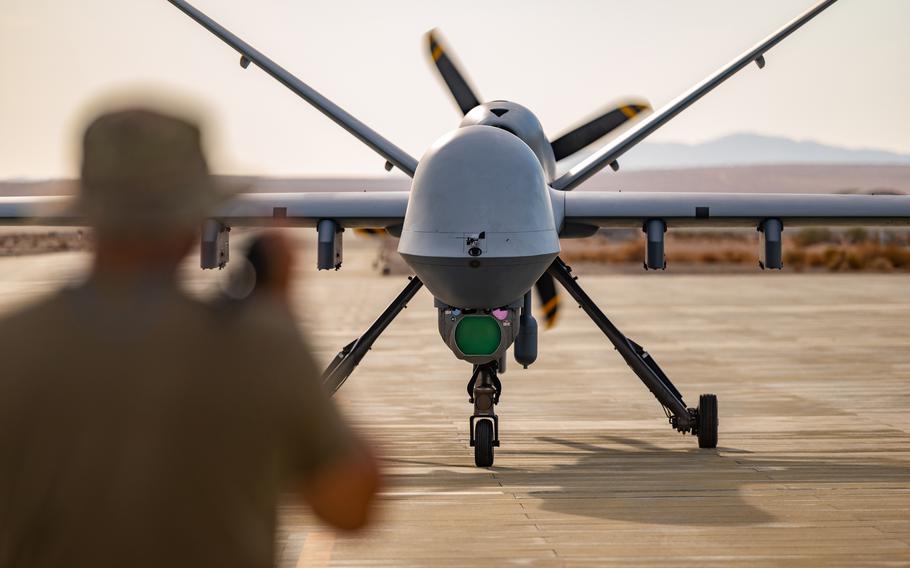 Eight Air Force MQ-9 Reaper drones and more than 150 airmen have started a yearlong deployment to southern Japan and will begin surveillance flights within weeks, according to U.S. and Japanese officials.

Members of the 319th Expeditionary Reconnaissance Squadron held an assumption-of-command ceremony Sunday at Kanoya Air Base to kick off their mission, U.S. Forces Japan spokesman Air Force Maj. Thomas Barger said by phone Monday. Kanoya is a Japan Maritime Self-Defense Force base near the southern tip of Kyushu, the southernmost of Japan’s four main islands.

The drones will start flying from Kanoya sometime after the end of this month, a Kyushu Defense Bureau spokesman said by phone Monday. It’s customary in Japan for some government officials to speak to the media without identifying themselves.

“This strategic location combined with the MQ-9’s capability will allow the Japan-U.S. alliance to see and monitor vast areas,” the 319th’s commander, Lt. Col. Alexander Kelly, told airmen, local officials and members of the Maritime Self-Defense Force, in a video of the ceremony posted online by the Department of Defense.

The newly activated unit traces its lineage to the 319th Fighter Squadron of World War II. It was inactivated in 1977 as the 319th Fighter Interceptor Squadron at Tyndall Air Force Base, Fla., said 374th Operations Group commander Col. Jun Oh in another video of the ceremony.

The Kanoya deployment will share technology to help the U.S. and Japan overcome mutual challenges, he said.

“MQ-9s will support Japanese and U.S. intelligence, surveillance and reconnaissance priorities throughout the Indo-Pacific,” he said.

The Reapers at Kanoya will be configured for surveillance “and can’t be equipped with weapons,” according to a document from Japan’s Ministry of Defense posted on the Kanoya city website.

Kanoya Mayor Shigeru Nakanishi signed off on the drone deployment in July, citing its importance to national defense, despite residents’ concerns about potential accidents or crimes involving U.S. personnel.

Kanoya is already home to P-3C Orion maritime surveillance planes and UH-60J Black Hawk and SH-60K Seahawk helicopters of the Maritime Self-Defense Force. U.S. aircraft such as Marine Corps KC-130 tankers and Osprey tiltrotor aircraft visit the base during training.

The Reapers, made by General Atomics of San Diego, can carry 3,000 pounds of ordnance and first saw combat in Afghanistan in 2007 and in Iraq the following year. The U.S. has employed them on numerous missions throughout the Middle East and Africa.