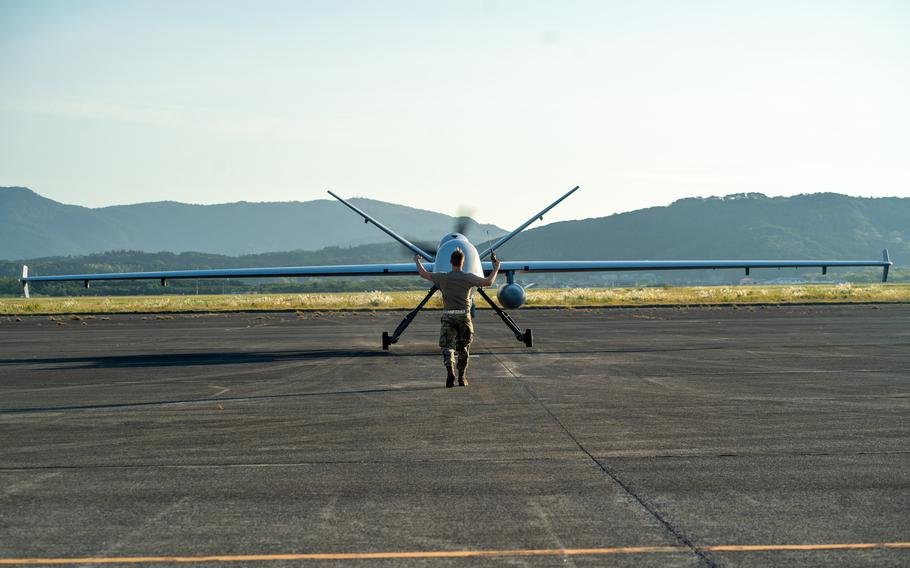 An airman with 319th Expeditionary Reconnaissance Squadron marshals an MQ-9 Reaper from its parking space at Kanoya Air Base of the Japan Maritime Self-Defense Force in Kanoya, Japan, on Nov. 5, 2022. (U.S. Air Force)

Eight Air Force MQ-9 Reaper drones and more than 150 airmen in the newly formed 319th Expeditionary Reconnaissance Squadron began a yearlong deployment to Kanoya Air Base last month. Kanoya is a Japan Maritime Self-Defense Force base near the southern tip of Kyushu, the southernmost of Japan’s four main islands.

Kanoya Mayor Shigeru Nakanishi, who signed off on the deployment in July, and Kagoshima prefecture Gov. Koichi Shiota were among about 40 local dignitaries who watched a Reaper fly from the base for about 15 minutes on Saturday, a Kyushu Defense Bureau spokesman said Monday. Japanese government officials typically speak to the media on condition of anonymity.

The drone took off from the base and flew over Kanoya city during the demonstration flight, he said. The reconnaissance squadron operated the drone at take-off and landing but a mission-control unit in the United States handled the Reaper in-flight, the defense bureau spokesman said.

The local leaders had asked to see the drones fly before operations begin to allay community concerns, said a Kanoya city official who deals with base affairs.

“It was good that we were able to see the actual aircraft and it actually flying,” Nakanishi told reporters Monday.

The drones seemed quieter than other aircraft stationed at Kanoya, Nakanishi said.

“We will continue to take measures for safety and security of the residents by working with the related organizations including Kyushu Defense Bureau so there will not be any accidents or incidents,” Nakanishi told the reporters, according to the city official. 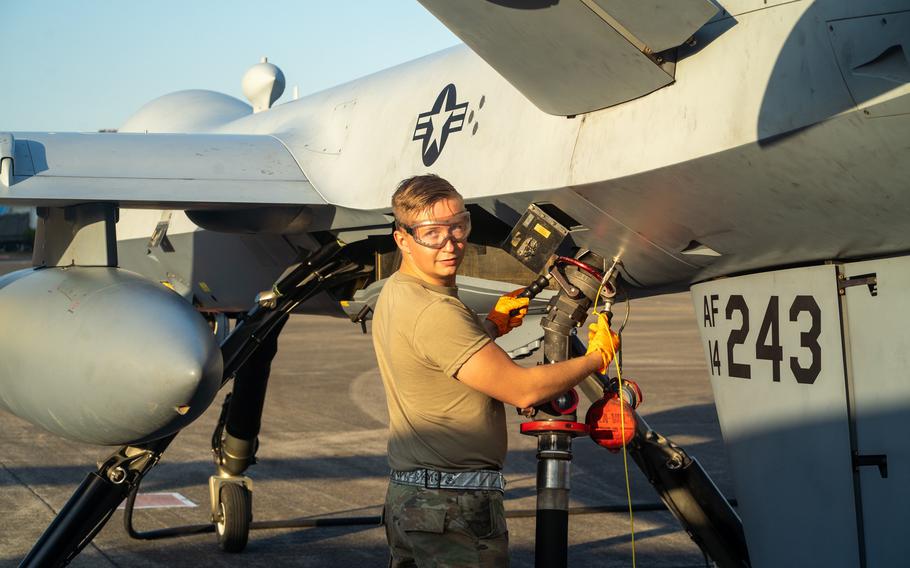 Video released Wednesday by the Air Force shows one of the unmanned aircraft taxiing, lifting off and buzzing overhead during an earlier test flight.

The Reapers, deployed by U.S. Pacific Air Forces, will make reconnaissance flights in “close coordination” with the Japan Ministry of Defense, according to an Air Force statement with the video. PACAF describes the Reaper as medium-altitude, long-endurance, remotely piloted aircraft.

The Reapers at Kanoya will be configured for surveillance “and can’t be equipped with weapons,” according to a document from Japan’s Ministry of Defense posted on the Kanoya city website.

Kanoya is already home to P-3C Orion maritime surveillance planes and UH-60J Black Hawk and SH-60K Seahawk helicopters of the Maritime Self-Defense Force. U.S. aircraft such as Marine Corps KC-130 tankers and Osprey tiltrotor aircraft visit the base during training.

The Reapers, made by General Atomics of San Diego, can carry 3,000 pounds of ordnance and first saw combat in Afghanistan in 2007 and in Iraq the following year. The U.S. has employed them on numerous missions throughout the Middle East and Africa.