‘Strength through support.’ Wright-Patterson once again provides haven during a hurricane 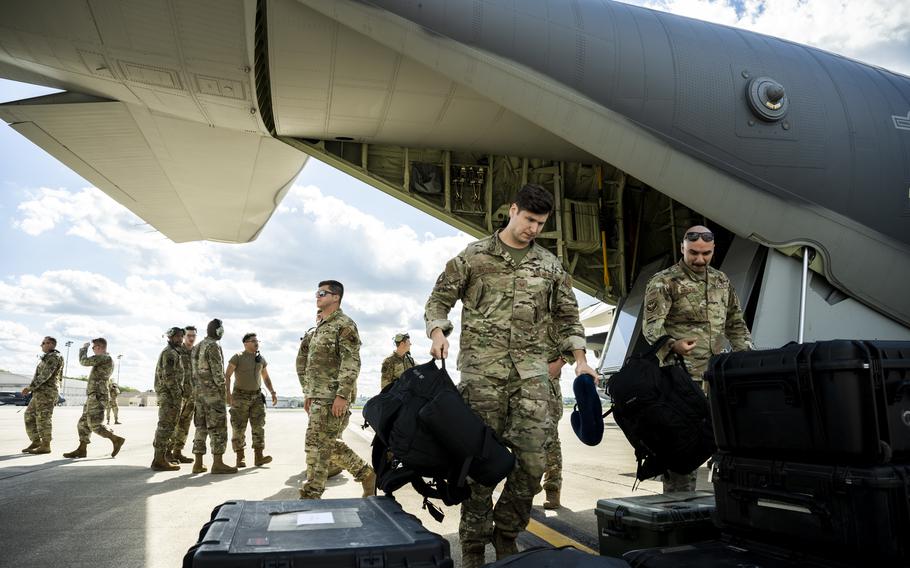 (Tribune News Service) — When 22 airplanes and about 250 Air Force personnel from Florida and South Carolina needed a haven from Hurricane Ian last week, operations and readiness personnel at Wright-Patterson Air Force Base did not view their visits as an interruption of their work.

This was their work.

“This is the mission of Wright-Patterson Air Force Base,” said Maj. Hollis Troxel, director of operations of the 88th Operations Support Squadron at Wright-Patterson. “It goes right back to the 88th Air Base Wing motto: Strength through support.”

Wright-Patterson, the only 24/7 Air Force base in a five-state region, sheltered Airmen and planes from the 1st Special Operations Wing, of Hurlburt Field, Fla. The field evacuated its MC-130J Commando II and MC-130H Combat Talon II airlifters and a AC-130J Ghostrider gunship to Wright-Patterson ahead of Ian’s landfall in Florida last week.

Ian’s damage was ferocious and its toll grows daily. As of Monday, more than 100 have been reported killed by the hurricane in Florida.

Wright-Patterson was and is ready to host multiple units, although ramp and pavement space is not limitless, Troxel said in an interview Tuesday.

If all of this sounds familiar, there are good reasons. In 2006, the Air Mobility Command evacuated C-17 Globemaster III aircraft from Charleston to Wright-Patterson. About 15 F-22 jets from Tydall Air Force Base near Panama City sought shelter at Wright-Patterson in 2018. Eight F-15 Eagles from the 125th Fighter Wing, Jacksonville Air National Guard Base, Florida, landed here in September 2017.

“For us, it’s a huge honor to be able to do that for units,” Troxel said.

Wright-Patterson’s position as a haven is clear. While the Dayton region has four seasons and its share of poor weather, it is free of hurricanes. The base airfield and air traffic control tower operate 24-7. The base is large, with relatively ample airfield pavement.

And Wright-Patterson has the people, with a detailed, well practiced plan, Troxel said.

“We can take last-minute requests and really go into action,” he said. “We’re ready and we’re for that, based on a plan already being in place — who is going to do what, and how that is going to be coordinated.”

It starts with a phone call to a point-of-contact at the base. The message usually is simple: A hurricane is headed toward an Air Force Base, and evacuation is a distinct possibility.

“Our guys are the ones who receive the aircraft,” said Tom Riste, director of the Logistic Readiness Squadron. “We had a pretty good heads-up on this one. This was, I think, 40 hours out before the initial plane arrived.”

One of the biggest questions is the number of jets and people inbound.

That’s because Wright-Patterson personnel see to an array of needs — fuel, lodging and meals for arriving personnel and more. Wright-Patt personnel even gave visitors loaner vehicles and a ride to a rental car business when the finite number of loaners ran out.

When area hotels were full, Wright-Patterson secured hotel rooms as far away as Middletown for this storm.

“We do from stem to stern,” Riste said. “It’s a Navy term, but we do take care of them. That’s why they come here.”

While all this is happening, Wright-Patterson’s flying mission, the 445th Airlift Wing, is still doing its job — as are the visiting units. Those planes continue to fly their missions, taking off from the base and returning.

The visiting units “came here and continued their mission without interruption from Wright-Patt,” Troxel said.