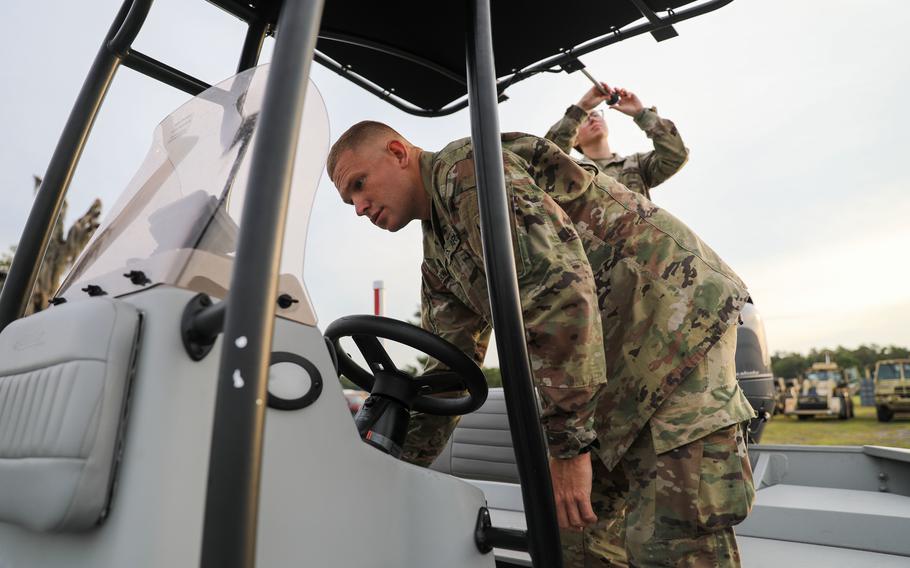 ATLANTA — The Air Force and Navy on Tuesday evacuated planes and ships from military bases in Hurricane Ian’s path as the massive storm approached western Florida, where federal officials warned it could bring life-threatening flooding and damage.

MacDill Air Force Base in Tampa evacuated its fleet of KC-135 refueling jets and other aircraft and closed the base to nonessential personal on Tuesday as the National Hurricane Center warned the “extremely dangerous major hurricane” was expected to strike near the metro area as soon as Wednesday. In Jacksonville, where the storm was projected to strike afterward, the Navy spent Tuesday sending several ships to sea and “heavy-weather mooring” others, the service said in a statement.

The Navy also evacuated most of its P-8 and P-3 maritime surveillance planes from nearby Naval Station Jacksonville, the service said. Other aircraft were moved into hangars rated to withstand hurricane conditions, as leaders expected to close those northeast Florida bases to nonessential personnel on Wednesday.

Eglin Air Force Base, located some 300 miles farther west of MacDill on the Florida Panhandle, also evacuated aircraft Tuesday, officials said. Base leaders sent F-35 stealth fighters out of the storm's path, but they did not close the installation Tuesday.

Hurricane Ian, which is now a Category 3 storm, boasted sustained winds of some 120 mph Tuesday evening as it moved past western Cuba and into the Gulf of Mexico, where it could strengthen into a Category 4 storm before making landfall on Florida’s coast Wednesday, according to the National Hurricane Center. Hurricane conditions could reach west Florida by Wednesday morning, the center said in its 5 p.m. update Tuesday. It issued a hurricane warning for most of the western Florida peninsula, stretching from the Anclote River — about 10 miles north of Tampa — south to Chokoloskee, an island some 210 miles farther south.

The Guard was poised to conduct route clearance, search and rescue, security and humanitarian assistance, said William Manley, a Florida Guard spokesman. The Florida Guard had staged aircraft, high-water vehicles and boats to respond to the storm, he said.

The hurricane center warned Ian could dump 12 to 18 inches of rain across central and northeast Florida, with totals up to 24 inches in some areas. The storm was expected to drop 5 to 10 inches over other parts of Florida. The center also warned the storm could cause flooding in parts of southern Georgia and coastal South Carolina in the coming days, with rainfall totals up to 12 inches in some locations.

Pentagon officials said Tuesday that active-duty troops could also be mobilized to respond if requested by the Federal Emergency Management Agency. FEMA was already using military bases in Alabama and Georgia as staging bases for its response, said Air Force Brig. Gen. Pat Ryder, the Pentagon’s top spokesman. Those bases included Maxwell Air Force Base in Alabama and Moody Air Force Base, Robins Air Force Base and Marine Corps Logistics Base Albany in Georgia.

Ryder also noted that despite the evacuations from key bases in Florida, the U.S. military would continue to operate as normal — especially considering MacDill Air Force Base houses two of the Pentagon’s most critical commands in U.S. Central Command and U.S. Special Operations Command.

The general said contingency plans had been put in place to ensure those commands could continue to oversee their operations.

“Hurricanes hitting the state of Florida are not new,” he told reporters at the Pentagon. “So, the bottom line is neither of those commands will miss a beat regardless of whether the storm hits in the Tampa area or not.”