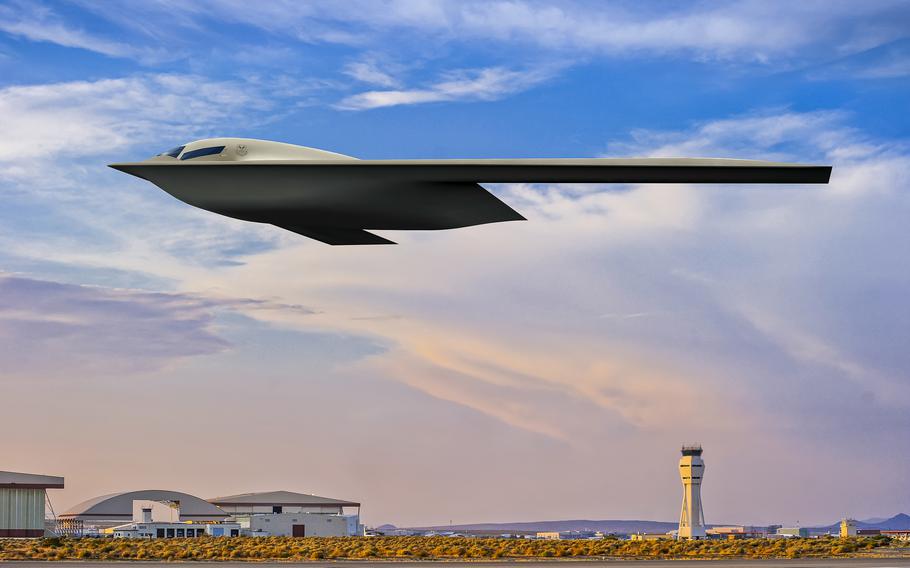 An artist’s rendering of a B-21 Raider, with Edwards Air Force Base, Calif., as the backdrop. The Air Force announced Sept. 20, 2022, that it plans to unveil the B-21 in the first week of December during a ceremony at the Northrop Grumman production facilities in Palmdale, Calif. (Alan Radecki/Northrop Grumman)

The Air Force’s highly anticipated B-21 bomber, which has been in development for years, will be unveiled in December, the service announced this week.

Air Force Chief of Staff Gen. CQ Brown Jr. described the event as a “historic moment” for the military.

“We last introduced a new bomber over 30 years ago,” Brown said in a statement Tuesday, adding that the Air Force “must continue to rapidly modernize” to stay ahead of the security threats posed by China.

The B-21 is a long-range stealth bomber that will incrementally replace the B-1 and B-2 and become the backbone of the bomber fleet, the Air Force said. It can carry conventional and nuclear weaponry.

The new B-21 Raider will be showcased at a ceremony in December at Northrop Grumman’s production facility in Palmdale, Calif.

The development of the B-21 Raider is linked to concerns about advances in anti-aircraft weapons by adversaries such as China.

The bomber’s advanced stealth technology gives the U.S. a system “capable of penetrating enemy air defenses and reaching targets anywhere in the world, something approximately 90% of the nation’s current bomber fleet is incapable of doing,” Northrop Grumman said in a statement.

After the unveiling, the B-21 program will proceed with a testing phase.

The cost per plane is roughly $600 million, and the Air Force has indicated it could acquire at least 100 of them. The B-21 Raider is expected to make its first flight in 2023.