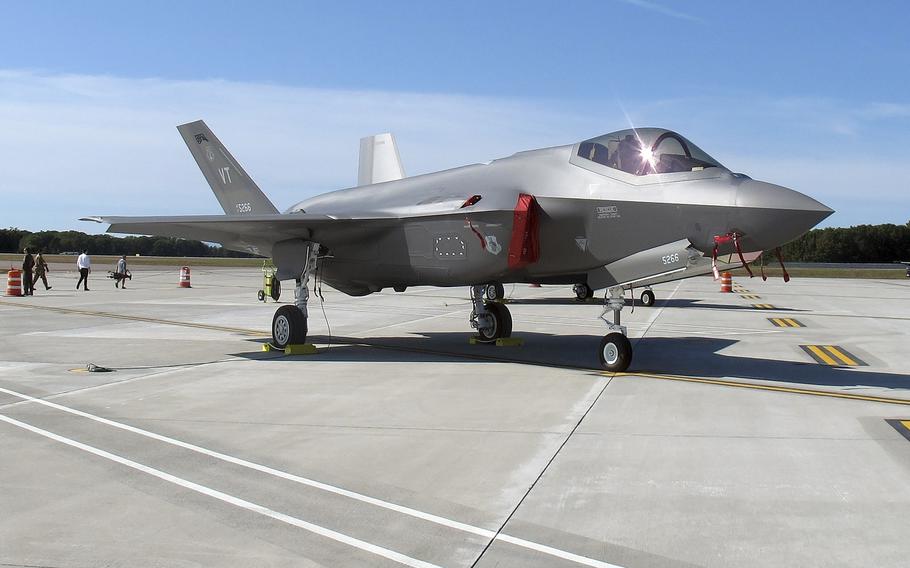 WASHINGTON (Tribune News Service) — Every one of the more than 825 F-35 fighter jets delivered so far contain a component made with a Chinese alloy that's prohibited by both U.S. law and Pentagon regulations, according to the program office that oversees the aircraft.

The component — a magnet used in an aircraft-powering device supplied by Honeywell International Inc. — has been used in the plane since 2003, the Pentagon's F-35 program office said. On Wednesday, the Pentagon suspended deliveries of new F-35s to make sure the program complies with regulations related to "specialty metals."

The F-35 program — which may result in over 3,300 jets — will now seek a national security waiver from the Pentagon's top acquisition official, William LaPlante, to resume deliveries of already assembled new aircraft containing the alloy, F-35 spokesman Russell Goemaere said.

Speaking to reporters on Friday, LaPlante said a waiver was likely if there were no security or safety issues.

"I'm hoping this can be resolved pretty soon," LaPlante said.

The program office doesn't anticipate "replacing magnets in delivered aircraft," according to Goemaere. Replacing them could entail costly and time-consuming retrofits of the over 500 U.S. training and operational aircraft. The Pentagon and Lockheed Martin Corp., which builds the aircraft, have found a U.S. source for the alloy for future planes, the company said.

U.S. law and Pentagon acquisition regulations prohibit the use of specialty metals or alloys made China, Iran, North Korea or Russia. The Defense Contract Management Agency reported the violation to the F-35 program office on Aug. 19.

A decade ago, the Pentagon granted a waiver to Honeywell to use Chinese magnets in other F-35 components, saying the program, already beset by delays and cost overruns, would have been slowed even more.

The program office says the part has no technical flaw and it poses no security risk to the U.S.'s top stealth fighter or its 8 million lines of software code. Rather, it's a question of supply-chain security and why the banned alloy wasn't detected by Honeywell. The Pentagon's judgment that China poses the biggest threat to the US globally only adds to the challenge.

"I had CEO tell me two weeks ago that he thought he had 300 suppliers and he discovered when he counted all of the suppliers he probably had 3,000, and suppliers can change overnight," LaPlante said.

When the halt was announced, Honeywell said it was working with the Pentagon and Lockheed, and was "committed to supplying high-quality products that meet or exceed all customer contract requirements." Spokesman Adam Kress said the company has no additional comment.

The device in question is a magnet contained in a Honeywell turbomachine that integrates the aircraft's auxiliary power unit and an air cycle machine into a single piece of equipment that provides electrical power for ground maintenance, main engine startup and emergency power.

It includes a cobalt and samarium alloy "recently determined to be produced in the People's Republic of China" and magnetized in the US, the F-35 program office said. It was provided to a Honeywell subcontractor by a lower-tier supplier, Lockheed Martin said.

"We are working with our partners and DoD to ensure contractual compliance within the supply chain," Lockheed Martin spokeswoman Laura Siebert said in statement. "We are working with the DOD to resolve the issue as quickly as possible to resume deliveries."

Lockheed Martin delivered 88 of a contracted 148 F-35 jets this year before the halt.