Why a plan to cut 1,100-person unit at Scott Air Force Base would be ‘detrimental’ to the metro-east 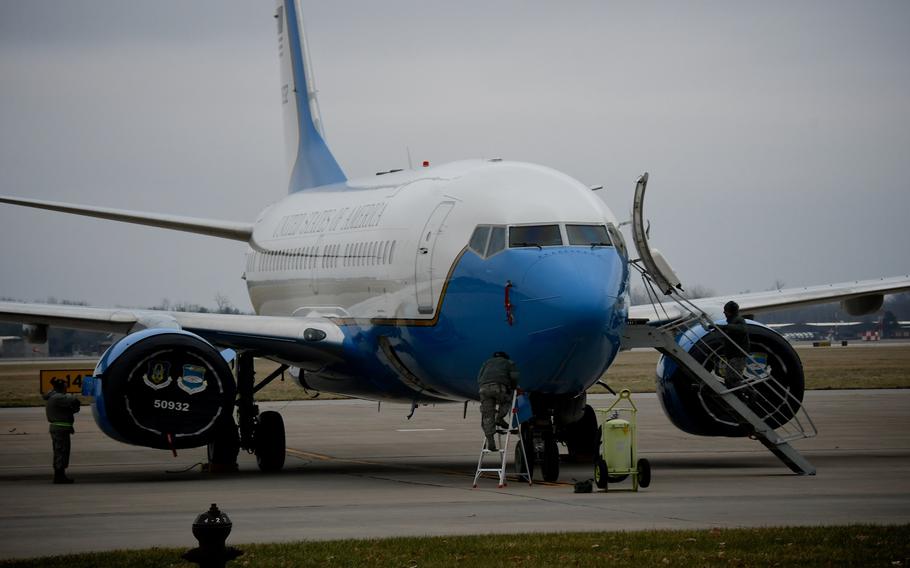 (Tribune News Service) — In early June, U.S Rep. Mike Bost’s office sent out an urgent statement about the potential loss of a lesser known wing at Scott Air Force Base.

Bost, a Republican from Illinois, sounded the alarm on an Air Force proposal to stop funding the C-40 aircraft attached to the 932nd Airlift Wing, which has been stationed at Scott AFB since 2007. It sometimes takes the back seat to the higher profile 375th Air Mobility Wing and U.S. Transportation Command, but the 932nd plays a unique role.

Selling the planes would mean an end to the wing where roughly 800 part-time Air Force Reserve members, 190 Air Reserve technicians, 50 civilians, 28 pilots and 35 flight attendants serve. More than half the wing live within 150 miles of the base, and the wing has a local economic impact of roughly $80 million annually, according to the Air Force. Of the part-time reservists, roughly 125 live in the metro-east.

“In a traditional reserve unit, we are members who were born and raised in your local communities, born in your hospitals, educated in your schools, and we live and we work in your communities,” said wing Commander Col. Glenn Collins.

C-40s are similar to passenger or business jets but with a few modifications. They’re ideal for transporting government leaders on diplomatic trips worldwide, and customers include members of Congress and the president’s Cabinet.

Far from giving out a bag of pretzels and a ginger ale on board, the planes’ flight attendants are trained in cooking schools and serve up fine dining. The pilots have years, if not decades, of military flight training under their belts.

But the 932nd has plenty of responsibilities other than flying higher-ups around. The 800 reservists are nurses and doctors who served in New York City during the onset of the COVID-19 pandemic. A 932nd reservist, Sgt. Anthony “Tony” Campbell, died serving in Afghanistan in 2005. Every weekend for years, they’ve gone to Scott AFB for drills.

The reservists don’t fly the C-40s, but if the Air Force sold the planes, the wing would dissolve along with reservists’ jobs.

Other responsibilities are assigned as needed, Collins said.

Bost believes losing the wing would be “detrimental to military readiness and the Scott AFB community.”

“We believe it is mission critical for both the 932nd and our Scott community at large that they remain here,” a spokesperson for Bost said in an email.

Yet the Air Force is always looking for places to save or reallocate money.

“Do we keep a C-40 or do we buy a B-21 bomber?” said Sean Houlihan, a spokesman for the Air Force Reserve Command.

They’re also at the whims of Congress, which approves their budget every year through the National Defense Authorization Act.

“One day we’re fully funding (a wing) and the next day we’re removing aircraft. It’s a back-and-forth between the Air Force and Congress,” Houlihan said.

Why the Air Force sells planes

The Air Force is looking to modernize its force, and shedding some of its “legacy platforms” such as part of the C-40 fleet is part of that plan.

In other words, the 932nd depends on Congress paying for it to stay in business.

Lawmakers have yet to vote on the fiscal year 2023 National Defense Authorization Act, but Bost and U.S. Rep. Rodney Davis of Taylorville managed to get an amendment into the act that would prevent federal money from being used to retire Scott AFB’s C-40s as long as the planes remain in working order. The bill passed out of committee mid-June and awaits action from the Senate.

“As discussions over defense spending continue, Rep. Bost and I will continue to advocate for priorities important to Scott Air Force Base,” Davis said in an emailed statement.

It seems natural that members of Congress would want to keep a wing in business that flies them around the country and the world. But those planes are kept in Washington, D.C., not at Scott AFB. There are 11 C-40s total in the 932nd, four of them at Scott AFB.

“The Air Force was considering phasing out the C-40s at Scott AFB, but not those in D.C.,” Bost spokesperson Alexandra Naughton said. “Reps. Bost and Davis worked with Senator (Dick) Durbin to secure investments for communications upgrades to Scott’s C-40s, and we believe the planes at Scott AFB are just as essential in ensuring the Air Force is able to meet the transport needs of America’s government and military officials.”

What the metro-east would lose

Reserve units such as the 932nd differ from active duty units because typical positions last two to three years in one place, and then it moves. Reserve members are more permanent.

If the C-40s were defunded, Air Force leadership would examine whether they would supplement with a new flight mission, reallocate personnel or make it a wing that didn’t have aircraft assigned to it.

“This would be for higher headquarters to decide, not at my level, nor am I privy to any of these discussions if they even exist,” Collins said.

If the aircraft were defunded, some members of the 932nd might decide to move on, retire or not retrain on another aircraft.

“Some would stay and some would leave,” Collins said.

The 932nd will continue to operate and is committed “to meeting all parts of our wing mission, to include C-40 operations, until a decision is reached,” said 932nd spokesperson Major Neil Samson. If the planes were defunded, losing the bonds formed over the past 15 years since the 932nd came to Scott AFB would tantamount to breaking up family.

“Sometimes the things we have to do are difficult. They’re physically challenging. They’re mentally challenging,” Collins said. “That brings on its own stressors. But when you have that relief of your shared friends and shared values and you know you can count on that airman to your left and to your right because you’ve been with them, you’ve trained with them, you’ve worked with them — that’s of value.”

Timeline of the 932nd Airlift Wing

February 1963: The unit is organized into the Air Force Reserve as the 932nd Troop Carrier Group.

July 1969: The unit is redesignated the 932nd Aeromedical Airlift Group and takes on its present mission.

June 1992: The 932nd AAG realigns under the 446th Airlift Wing at McChord Air Force Base in Washington.

Oct. 1994: The 932nd AAG becomes the 932nd Airlift Wing aligned under the 4th Air Force at McClellan Air Force Base in California.