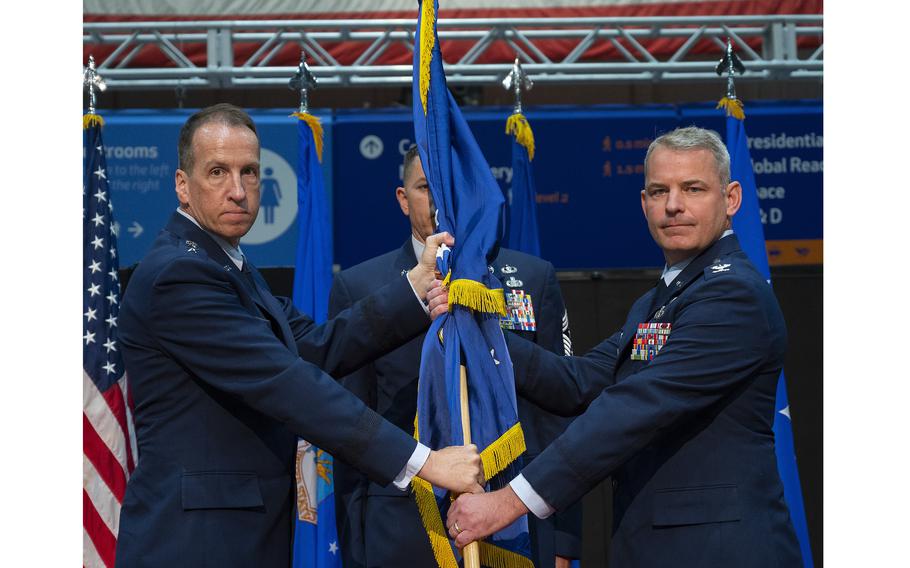 (Tribune News Service) — Col. Christopher Meeker took command Thursday of the 88th Air Base Wing, the host unit to one of the nation’s biggest and most complex Air Force Bases.

In a change-of-command ceremony at the National Museum of the U.S. Air Force, Meeker called Wright-Patterson Air Force Base “the heart of accelerate, change or lose” for the Air Force, recalling what has been the operational motto for Air Force Chief of Staff Gen. Charles Q. Brown Jr. for two years.

Wright- Patterson is the center of gravity for Air Force acquisition efforts, research and development, sustainment of aging fleets and much more.

“My wing, the 88th Air Base Wing, serves as the foundation for all of that work,” Meeker said.

Meeker called his previous assignment his favorite so far. “Probably the best one just because of the amount of adversity we had to face and the problems we had to solve. There’s a lot going on in that theater right now, the European theater.”

Meeker succeeded Col. Patrick Miller who led the wing since June 2020. Miller will serve as the next Director of Logistics, Engineering and Force Protection at Headquarters Pacific Air Forces at Joint Base Pearl Habor-Hickam, Hawaii.

Miller took command barely three months after the start of a global pandemic, also at the Air Force Museum, but before a far smaller assembly. Morris praised Miller for taking command at an historic juncture, maintaining a key military base that is the size of a small city during the pandemic and ensuring that no missions were interrupted.

“Pat, incredibly well done,” Morris told Miller before presenting him with the Legion of Merit award.

Meeker will command one of the Air Force’s busiest air base wings, with more than 5,000 military, civilian, and contractor employees.

The wing supports and serves what the organization describes as one of the “largest, most diverse, and most organizationally complex bases in the Air Force, including a major acquisition center, research and development laboratories, a major command headquarters, an airlift wing and the world’s largest military air museum.”

Meeker said Wright- Patterson will be the assignment that is the nearest he has ever served in 24 years to his hometown of Manito, Ill.

Beyond a tour of the Air Force Museum, a meeting with his team tops Meeker’s to-do list in coming hours and days.

“I think that any vision for the wing shouldn’t just come from me,” Meeker said. “I have a very collaborative approach.”