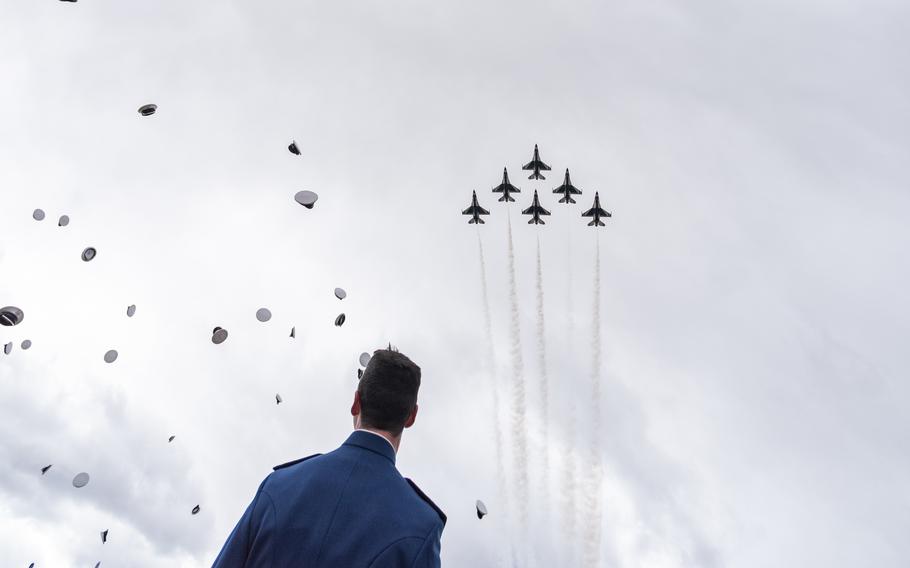 (Tribune News Service) — A senior Air Force Academy cadet who faces the possibility of being kept from graduating with his classmates after refusing to take the COVID-19 vaccine on religious grounds has begun proceedings to resign from the school, according to an academy official.

The cadet, whose name was not released, has submitted paperwork but his resignation has not been finalized and is not yet official, said academy spokesman Lt. Col. Brian Maguire.

If the resignation goes through, it will leave two senior cadets, or "firsties," who have refused the vaccine and will not be allowed to participate in next Wednesday's commencement ceremony, according to Gordon Klingenschmitt, a former Navy chaplain who has been advocating for the religious rights of 13 cadets who raised faith-based objections to taking the vaccine.

Dean Miller, academy chief of media relations, told The Gazette on Saturday that the three senior cadets still could graduate and receive their commissions if they commit to receiving the COVID vaccine according to the FDA's schedule.

One senior cadet has reversed course and taken the vaccine, Klingenschmitt said, but only because he is being treated for cancer and refusal would have made him ineligible for military health care benefits.

"He basically was pressured to violate his conscience and religious freedom," said Klingenschmitt, a 1991 academy graduate. "He gave in and took the vaccine only in order to save his life."

Klingenschmitt said he did not know a cadet had begun the resignation process, but said he would have advised against it.

"Strategically, it's a bad idea to resign because they might lose their legal standing, and they may be forced to repay their tuition," he said. "If they resign, they still owe."

Several of the cadets who refused the vaccine are hoping to add their names to the more than 200 "intervening plaintiffs" in a lawsuit filed in Ohio earlier this year, Klingenschmitt said. The lawsuit, Doster v. Kendall, claims that Air Force commanders were under orders to deny religious waivers to any airmen who wished to remain in the service.

A copy of the lawsuit, obtained by The Gazette, details a whistleblower account alleging that in October 2021 Air Force Secretary Frank Kendall held a closed-door meeting with commanders "responsible for adjudicating accommodation requests to the Air Force's vaccine mandate" and told them "no religious accommodations could or should be approved for anyone who would be remaining in the Department of the Air Force."

The lawsuit is requesting a preliminary injunction that would temporarily keep the Department of the Air Force from taking any administrative or punitive action against the plaintiffs.

According to the lawsuit, the Air Force has granted, to date, nearly 2,300 medical and administrative vaccination exemptions, but only 42 out of more than 5,000 initial requests for religious exemption. All 42 service members who received the religious waivers were nearing the end of their careers.

"To be clear, the Department of the Air Force has accommodated thousands of airmen, at least from a medical or administrative perspective, thus belying any claim that vaccination is a must for mission accomplishment," the lawsuit states.

On Wednesday, academy Director of Public Affairs Brian Maguire told The Gazette that "we provided resources and information to the cadets in order to make a decision and graduate with the Class of 2022.

Klingenschmitt said several Air Force Academy cadets have received an official letter of reprimand for not taking the vaccine. A redacted copy of the letter states the cadets are in violation of Article 90 of the Uniform Code of Military Justice for disobeying an order from a superior officer. A prospective military officer is expected to follow orders from the officers appointed over them even if they disagree with the orders, the letter states.

Klingenschmitt said he believes the academy has violated the spirit, if not the letter, of the vaccine policy by denying religious exemptions across the board.

About 80 people attended a rally on Saturday in support of the senior vaccine refusers, Klingenschmitt said. Another protest will take place near the north and south Academy gates on graduation day, May 25, he said.

"Our protest signs will be directed at (academy Superintendent) Gen. Richard Clark," he said. "They say, 'Keep your oath. Defend religious freedom. Let them graduate.'"