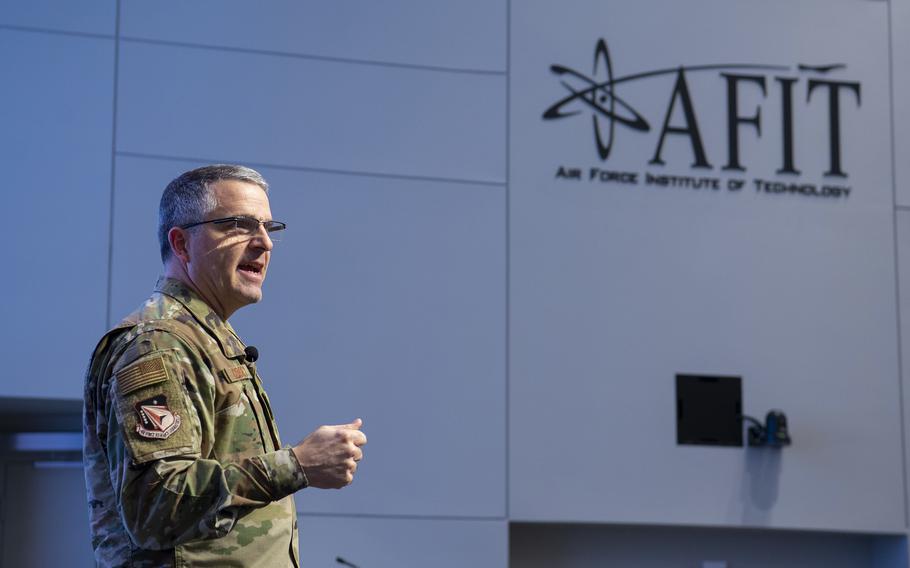 (Tribune News Service) — The first instance of an Air Force general officer being convicted in a court-martial moved to its sentencing phase Monday, with the sister-in-law of Air Force Maj. Gen. William Cooley telling the court how the two-star general’s misconduct upended her life.

Cooley’s sister-in-law said she allowed the two-star general into her New Mexico home, a home that had been full of love and friendship, she said in a hearing at Wright-Patterson Air Force Base.

In return, she said, Cooley “targeted me, isolated me and attacked me. Bill robbed me of my safety ... and forever destroyed all trust I ever had in him.”

“I went from being his sister-in-law, a member of his family for almost 30 years, to his victim,” she said. “And, in my eyes, he became a predator, a title he will bear for the rest of his life.”

Cooley, a former commander of Air Force Research Laboratory (AFRL), was found guilty Saturday of one specification of abusive sexual contact against his brother’s wife. The allegations stemmed from an encounter in August 2018, when she gave him a ride to his parents’ house after a family gathering in New Mexico.

The charge had three specifications involving how the two-star general was reported to have touched his sister-in-law — forcing his tongue in her mouth, forcing her hand to his genitals and pushing his hand between her legs and cupping her breast, according to an Air Force charge sheet.

After five days of a trial at Wright-Patterson, the judge found Cooley guilty of the first specification — “kissing her on the lips and tongue, with an intent to gratify his sexual desire” — while acquitting him of the latter two.

Congress changed the law so that this is no longer a sexual offense and a felony, defense counsel Maj. Shea Hoxie argued Monday.

But Lt. Col. Matthew Neil, a government attorney, said the law as it existed in August 2018, when the crime was committed, must apply. The judge agreed with him.

The accuser and her husband wanted the high-ranking officer to get help and “get better,” but she said Cooley never demonstrated “true contrition.”

She said “It became agonizing the impossible position he put us in” — report a relative or continue to let the man who assaulted her “get away with it.”

“In staying quiet, I was perpetuating a cycle of abuse that I had taught my daughters to always stand up against,” she said.

“My only fault,” she added, “was trusting my brother-in-law.”

No jury was empaneled. Jimenez presided in a bench trial.

The Air Force started investigating the case in late 2019. Gen. Arnold Bunch, commander of the Air Force Materiel Command (AFMC) at Wright-Patterson, fired Cooley from the AFRL job in January 2020. Since then, Cooley has served as a special assistant to Bunch, working on AFMC’s digital campaign.

Over five days, starting April 18, the government called 10 witnesses in the trial phase of the case; the defense rested without calling any. Jimenez began deliberating shortly after noon Friday, took an overnight break, and pronounced her verdict Saturday morning.