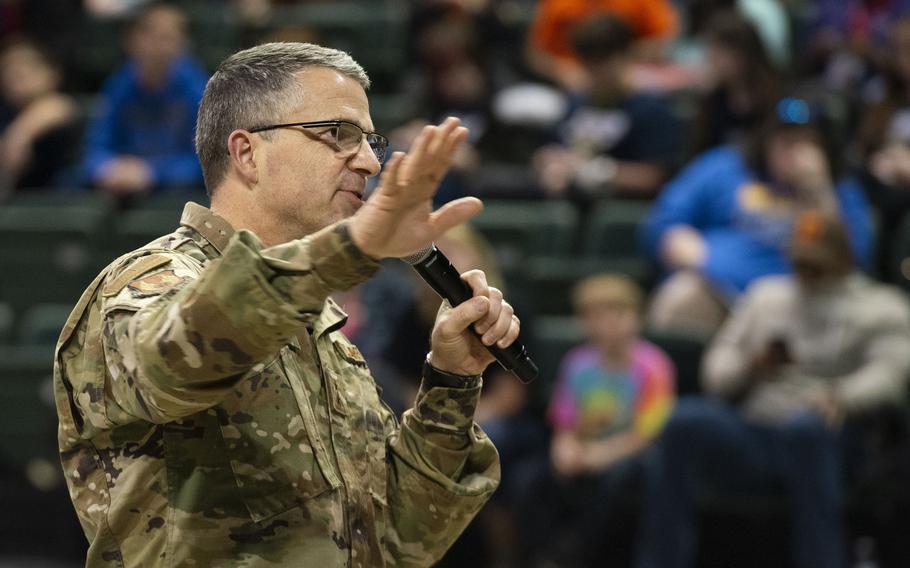 Maj. Gen. William Cooley speaks during a ceremony in Dayton, Ohio, in February 2019. Selection of a jury of two- and three-star generals starts Monday, April 18, 2022, at Wright-Patterson Air Force Base in the court-martial of the former Air Force Research Laboratory commander accused of kissing and touching a woman without her consent. (R.J. Oriez/U.S. Air Force)

(Tribune News Service) — A military judge will decide the fate of former AFRL commander Maj. Gen. William Cooley this week instead of a jury of his peers.

"Not having to pick a jury will make this process far more smooth," Dan Conway, attorney for Cooley, said after the first day of the court-martial of the former commander of Air Force Research Laboratory.

Cooley faces one charge of abusive sexual contact with three specifications. If convicted by a judge, Cooley faces dismissal from the Air Force, loss of pay and benefits and up to 21 years of confinement. Further, the charges are registerable, meaning if convicted Cooley may have to register as a sexual offender in the future, Conway said.

Cooley formally pleaded not guilty Monday, but he read a letter in a pretrial hearing last year denying the charges.

Cooley requested this morning that his court-martial be heard by the judge, an Air Force colonel, similar to a bench trial in civilian court. The motion was made before his attorney and the prosecution team began questioning a pool of two- and three-star generals for a possible jury empanelment.

Cooley is accused of making sexual advances toward a civilian woman, kissing and groping her through her clothes while off-duty in Albuquerque, New Mexico, in August 2018.

The military trial was set to begin Jan. 10 at Wright-Patterson, where Cooley today works with the commander of Air Force Materiel Command (AFMC). The trial was continued until Monday, but with the selection of a jury avoided, it may be possible to reach a verdict by Thursday or Friday, Conway said.

Asked if he expects his client to testify in the trial, Conway said that would be a "game-time decision" made at a later point.

Besides Conway, Cooley also has two uniformed Air Force officers representing him in the trial.

Selecting a jury in the complex case would have been challenging, the attorney said. Empaneled jurors would be required to outrank Cooley, and it was expected to be difficult to select jurors whose career paths depend on a U.S. Senate that, in Conway's words, "expends significant energy excoriating them about sexual assault on an annual basis."

Cooley was removed from command at AFRL in January 2020 following an Air Force investigation into the misconduct allegations. He then became a special assistant to AFMC chief Gen. Arnold Bunch.

The trial is set to resume at 8:30 am Tuesday at the headquarters of the 88th Air Base Wing at Wright-Patterson. The first witnesses may be called then, Conway said.

Neither Cooley's uniformed attorneys nor the attorneys for the prosecution commented after the first day's proceedings.

As commander of AFRL, Cooley led the Air Force's $2.5 billion science and technology program with additional $2.3 billion in externally funded research and development, overseeing some 6,000 people in the laboratory's nine technology directorates and the 711th Human Performance Wing.