Gen. Cooley’s ‘attack on me was like an F5 tornado,’ sister-in-law testifies 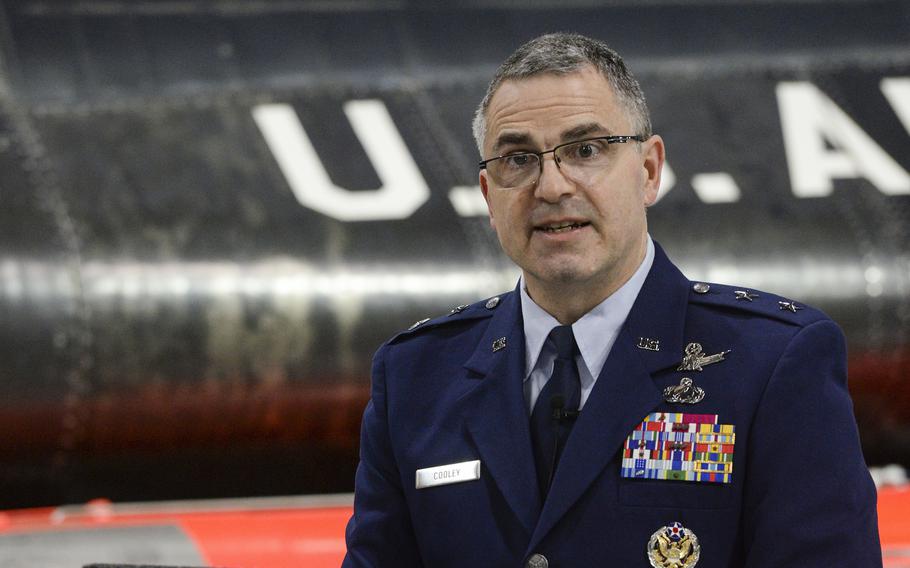 (Tribune News Service) — The sister-in-law of Air Force Maj. Gen. William Cooley testified in detail Tuesday about what she described as Cooley’s “attack” against her, alleging he pinned her upper body against her car door and groped her against her will after an off-duty car ride in August 2018 in Albuquerque, N.M.

“I’m scared,” the wife of Cooley’s brother said in direct testimony during Cooley’s court-martial. “I’m terrified. This is a man I’ve known since 1988, so 30 years. I feel like I’m having an out-of-body experience.”

The accuser in the case testified that Cooley — a two-star general and former commander of Air Force Research Laboratory at Wright-Patterson Air Force Base — pinned her against the driver’s-side door of her Jeep while they were both inside the vehicle after she gave Cooley a ride, cupping her breast over her clothing and pressing his hand between her legs.

“Bill Cooley’s attack on me was like an F5 tornado coming into my house, without my knowledge ... without my consent, ruining everything in its path,” she said.

Cooley faces one charge of abusive sexual contact with three specifications. If convicted by the judge, an Air Force colonel, Cooley faces dismissal from the service, loss of rank, pay and benefits and up to 21 years of confinement.

The accuser in the case is a civilian woman who does not work for the Department of Defense.

Tuesday was the second day of the court-martial but the first day of testimony from witnesses. The trial is at 88th Air Base Wing headquarters at Wright-Patterson.

Cooley’s accuser was on the stand for some five hours Tuesday.

Much of the questioning focused on what defense attorney Dan Conway portrayed as inconsistencies between the sister-in-law’s report to the Air Force Office of Special Investigations and her account of the events of that evening to others.

During direct testimony, the complainant testified that Cooley forced “my right hand over his genitals.”

On cross-examination, Conway focused on that aspect, at one point playing a recording of her more than two-hour interview with an OSI agent.

In the recording, the OSI agent asks her: “Did he ever make you, did you touch his (Cooley’s) genitals?”

“Just the fabric of his leg,” she answered in the recording.

In court, however, she said: “I consider that the fabric of his inside leg and genital area.”

Also during direct questioning, Air Force Maj. Abbigayle Hunter, an attorney in the government’s prosecution team, asked the accuser why after the events in question she told her husband, an AFRL employee, “that we (she and Cooley) kissed.”

Cooley’s sister-in-law answered that she regretted any intimation or language that portrayed the encounter as in any way consensual.

“I regret that to this day,” she said.

During cross, Conway focused on her motives and the motives of her husband, accusing them of attempting to make an anonymous report to OSI about what they said Cooley did that night in New Mexico.

“You were going to lie to your family,” about who reported against Cooley, Conway said to her.

“We just weren’t going to address it,” the witness replied. She stated that she wanted Cooley to “own the truth.”

Observers have said this is the first time an Air Force general officer has been court-martialed.

Cooley requested Monday that his court-martial be heard by the judge instead of a jury, similar to a bench trial in civilian court.

Redirect questioning of the alleged victim by the team of Air Force attorneys is set to resume Wednesday at Wright-Patterson.

The Dayton Daily News does not name those who say they are victims of sexual crimes.