Florida International Air Show postponed for 2022; Thunderbirds to headline in 2023 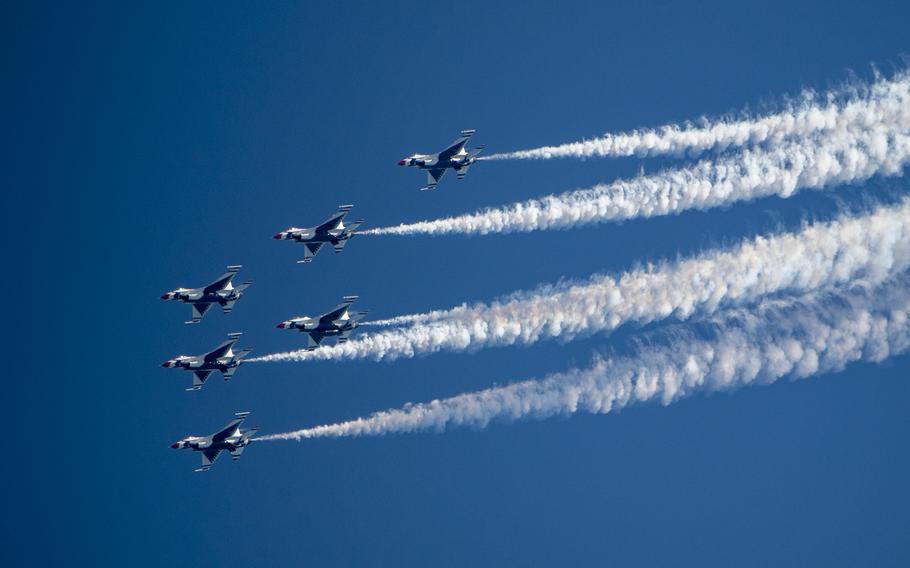 PUNTA GORDA, Fla. (Tribune News Service) — For the second time in three years, runway improvements at Punta Gorda Airport will force the postponement of the Florida International Air Show for 2022. But when the air show returns in November 2023, it will include the U.S. Air Force Thunderbirds as a headlining attraction.

The Thunderbirds announced their 2023 air show schedule at the International Council of Air Shows annual convention, which was hosted Dec. 6-9 in Las Vegas.

Both the Thunderbirds and the U.S. Navy Flight Demonstration Team, the Blue Angels, typically release their scheduled two years in advance, at that annual convention.

Currently the Thunderbirds are scheduled to appear at the Florida International Air Show on Nov. 4-5, 2023, in what will technically be the 40th air show hosted at the airport since it first started in 1982 — though the show this October was billed as the 40th anniversary show.

“Major jet teams tell you when they’re coming,” air show spokesman Steve Lineberry said Monday. “We’re excited because of the entire air show season for the Thunderbirds, we are the next to the last air show from around the country.”

The Thunderbirds’ final air show is traditionally their homecoming show at Nellis Air Force Base in Nevada, set for Nov. 11, 2023.

The demonstration team is scheduled to perform four times in Florida skies that year, including April 1-2 in Homestead; April 22-23 in Cocoa Beach and Oct. 28-29 in Sanford.

The Thunderbirds last appeared at the Florida International Air Show in 2019.

The 2020 show was postponed because of runway work at the airport, then a planned “Wings Over Charlotte” performance was canceled partly because of COVID-19 concerns.

Lineberry noted that going into show season this fall, air show officials already planned to take 2022 off because of the runway work.

Once named one of the “Ten Best Air Shows in the World,” by USA Today, the Florida International Air Show has raised almost $5 million for area charities and nonprofits since its inception in 1982.

Though the Blue Angels served as the headliner for the initial air show in 1982, they have not appeared at Punta Gorda Airport since 2012 — when the air show was still hosted in March.

Lineberry said scheduling requirements with the Navy have ruled out requests from the Florida International Air Show for that demonstration team, since the show moved from spring to fall in 2016.

The show had been a staple in the spring but it went on hiatus in 2015 because of mounting costs during peak season, then returned as a fall attraction.

The all-volunteer air show board will spend the time prior to the 2023 show securing sponsors, as well as signing other acts.

That can happen within weeks of the performance date.

Lineberry cited the appearance of the C-17 Globemaster at the 2021 show as one example.

The transport team, which took part in the evacuation of Afghanistan, only came available about six weeks before the show and was one of two featured acts, along with the U.S. Air Force F-16 Viper Demo Team from Shaw Air Force Base in South Carolina.