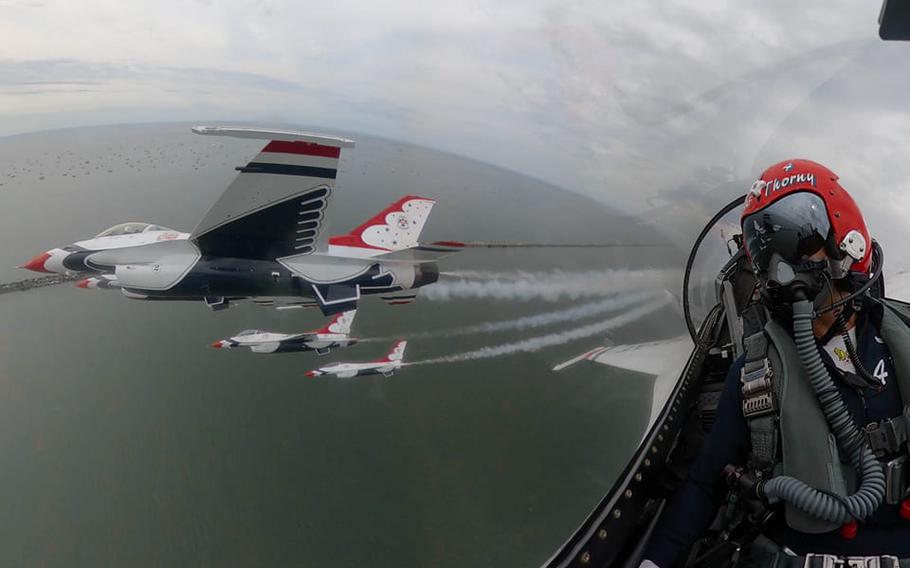 The Thunderbirds are a team of eight pilots that perform air shows across the country on a regular basis. (Facebook)

It features Air Force Thunderbirds pilots demonstrating just how close they get during air demonstrations — a stunt they refer to as “counting rivets at 350 knots.”

The pilot featured in the video is seen so close to the wavering jet above him that he could reach out and touch its belly. The only sound heard is the deafening roar of the engines.

“Our jets can be as close as 18 (inches) apart while traveling at almost 400 miles per hour!” the team posted on Facebook.

“Definitely close enough to start counting rivets from the perspective of Thunderbird 4.”

Commenters lauded the Nevada-based pilots for their precision and guts, and noted the video “puts you right in the driver’s seat!” A lot of “what if” questions were also asked, like, what if there’s a mechanical failure during the stunt ... or what if they bump into each other.

“Just knowing how fast a commercial airliner can lose altitude in seconds due to turbulence, this is jaw-dropping amazing from that view,” Gp Spector posted.

“Scary and awesome at the same time. And a ton of trust in each other,” Richard Pineau said.

Thunderbirds officials didn’t say where the video was filmed, but the stunt clearly takes place over an air field.

The team of eight pilots performs air shows across the country on a regular basis “showcasing the elite skills all pilots must possess” when flying fighter jets, according to the team’s website.

“The Thunderbirds are part of our combat force,” according to the Air Force. “If required, the team’s personnel and aircraft can be rapidly integrated into a fighter unit at Nellis Air Force Base, Nev. Since the aircraft are only slightly modified, they can be made combat-ready in less than 72 hours.”