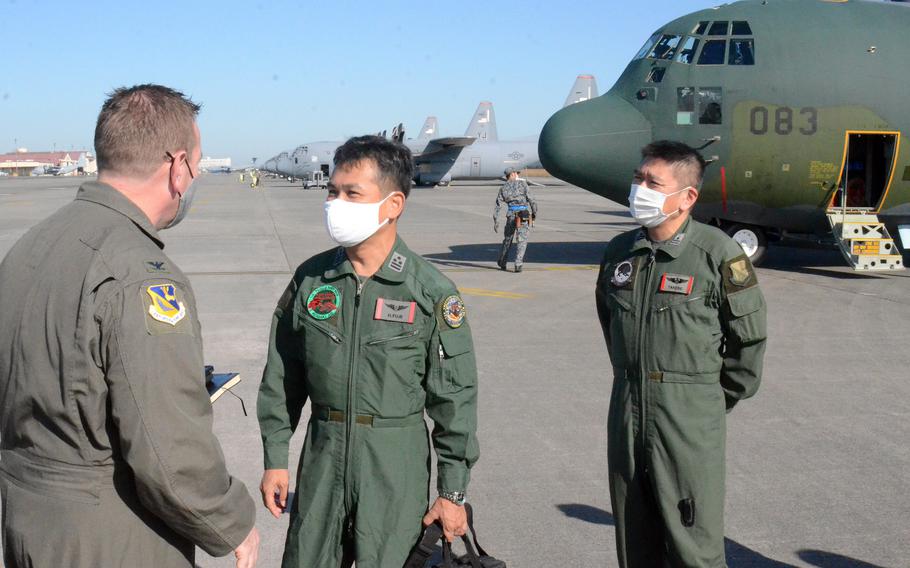 The Japanese fliers arrived in a green C-130H, a precursor to the C-130J adopted by the Air Force and flown from Yokota, the headquarters of the 5th Air Force and U.S. Forces Japan. Maj. Lucas Crouch, 39, of Green Bay, Wis., the only American stationed at Komaki, accompanied the Japanese aviators. He did two tours at Yokota and speaks Japanese.

“Their assault training capabilities are very limited” at Komaki, he said. “My idea was, let’s see if we can train at Yokota.”

The Yokota runway is marked to designate the length of an austere airfield where a pilot may have to land during a natural disaster or conflict, Crouch said.

Marking Komaki’s runway would be challenging since the base shares it with civilian airliners, he said.

The 401st is Japan’s only Hercules squadron. The unit sent two planes to help evacuate people from Afghanistan this summer and has participated in Operation Christmas Drop since 2015, Crouch said.

The Japanese airmen got a tour of Yokota’s air traffic control tower. They were not permitted by their escort to answer questions from Stars and Stripes.

“We welcome the opportunity to work and train with the JASDF,” Martin said. “We have had a long-term relationship with them on the C-130 side.”

The coronavirus pandemic has meant fewer exchanges between U.S. and Japanese forces since last year, “but now that people are vaccinated, we are trying to continue that,” he said.