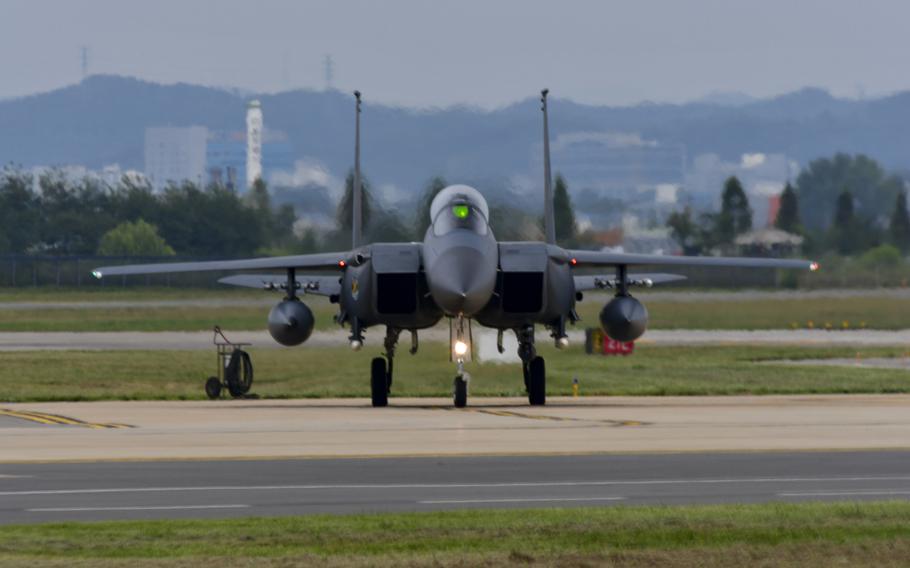 CAMP HUMPHREYS, South Korea — A five-day air exercise between the United States and South Korea kicked off Monday with little fanfare amid increased speculation about the resumption of inter-Korean relations.

The “low-key” joint drills consist of South Korean F-15K Slam Eagle and KF-16 fighter jets, a Korean air force officer told Stars and Stripes on Tuesday on the customary condition of anonymity. About 100 aircraft are involved from both countries, according to a Monday report by the Yonhap News Agency.

A 7th Air Force spokeswoman at Osan Air Base described the training as “routine” in an email Tuesday. Lt. Col. Kelley Jeter declined to provide further details, including the U.S. aircraft involved, citing the military’s policy against commenting on the joint exercises.

Previous air exercises in South Korea, such as 2017’s Vigilant Ace, mobilized more than 230 aircraft, including the fifth-generation F-35 Lightning II stealth fighter. The joint exercise reaffirmed “mutual support procedures” and improved “understanding and trust between the two nations,” according to a statement from the 51st Fighter Wing at Osan.

U.S. personnel and aircraft were jointly featured at last month’s annual Seoul International Aerospace and Defense Exhibition. Flyovers of U.S. F-16 Fighting Falcons and C-17 Globemaster III airlifters demonstrated their capabilities at the largest military exhibition in Northeast Asia, in addition to aircraft from other countries.

Joint military drills between the allies have been scaled back in recent years and publicizing them has nearly ceased amid the ebb and flow of North Korean relations. The North frequently rails against the drills in propaganda statements that describe them precursors to an invasion of the country.

U.S. and South Korean forces teamed up for a computer-simulated military exercise in August, despite Pyongyang’s protests. Prior to that training, senior North Korean official Kim Yong Chol described it as an “unfavorable prelude further beclouding the future of the inter-Korean relations.”

Senior officials from the U.S. and South Korea have traveled between the two countries in recent weeks to discuss the resumption of dialogue with the North. South Korean President Moon Jae-in’s administration has pushed to declare a formal end to the 1950-53 Korean War, and the U.S. has called ongoing discussions on that topic “very productive.”