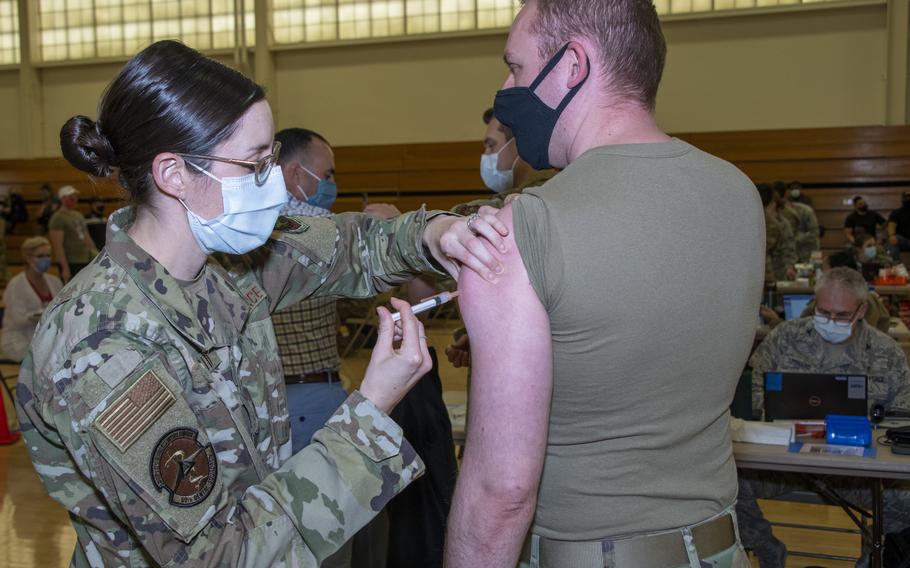 Up to 12,000 Air Force personnel have rejected orders to get fully vaccinated against the coronavirus despite a Pentagon mandate and officials say it is too late for them to do so by Tuesday's deadline, posing a first major test for military leaders whose August directive has been met with defiance among a segment of the force.

The vast majority of active-duty airmen, 96.4%, are at least partially vaccinated, according to data from the Air Force. But officials have warned that, barring an approved medical or religious exemption, those who defy lawful orders to be fully immunized are subject to punishment, including possible dismissal from the service or they could be charged in the military justice system.

The challenge now confronting Air Force leaders — how to address potential large-scale dissent in the face of a top health priority that has been deeply politicized — is a bellwether for the dilemma that's in store across the military's other services, which have staggered compliance deadlines ranging from the end of November to the middle of next summer and in some cases have experienced far greater resistance to President Joe Biden's mandate.

A wave of dismissals could jolt the Air Force personnel system and cause significant challenges within units that must be ready to respond to crises at a moment's notice, especially if some vital jobs — such as pilots or aircraft maintainers — are overrepresented among those who could face expulsion, said Katherine Kuzminski, a military policy expert at the Washington think tank Center for a New American Security.

"The fact that it's a choice leading to potential loss to readiness is striking," she said.

The Air Force is the third largest military service, just behind the Navy, with 324,000 active-duty airmen, making even 3% of its ranks a substantial number. For comparison, personnel assigned to Nellis Air Force Base in Nevada, one of the service's most populated installations in the United States, numbered slightly more than 10,000 in 2019.

The Air Force declined to say how many airmen appear to be outright refusing vaccination versus those seeking exemptions or those who have opted out because they are nearing their scheduled exit from the military. The Air Force will release some of those details after next week's deadline passes, said Ann Stefanek, a spokesperson for the service.

Religious objections have centered on the fetal cell lines used in some aspects of vaccine development — essentially reproductions of cells from abortions performed in the 1970s and '80s; the shots themselves don't contain the actual cells. A regimen of numerous vaccines is required upon joining the military and even more if troops are deployed overseas. Some of the required vaccines for diseases like Rubella, chickenpox and hepatitis A also were developed using similar cells.

Vaccination rates in the Air Force have slowed in recent weeks, and it is too late to begin a regimen now and be in by compliance by Tuesday's deadline, indicating the Air Force has mostly inoculated all troops who want the vaccine, officials said.

Airmen receive counseling from leaders and medical providers when filing a medical exemption, and for religious exemption requests, service members must meet with a chaplain to determine if their request was generated by a "sincerely held belief," Stefanek said.

Information about their request is forwarded to a senior commander for consideration, Stefanek said, typically a three- or four-star general who must weigh an individual's request against a unit's mission requirements.

Even if the commander believes an airman has made a sincere request, it may be denied if it is believed the unvaccinated airman could harm unit cohesion or make it too difficult to work close together, Stefanek said.

Historically, most administrative exceptions have been made for service members close to a planned departure, she said. Airmen who secured approved retirement or separation by Nov. 1, with an exit by April 1, are not subject to the vaccine mandate, she said.

Overall, the military's vaccination rate has climbed since August, when Defense Department leaders informed the nation's 2.1 million troops that immunization would become mandatory.

Nearly 87% of active duty troops are fully vaccinated, Kirby said, though hesitancy among military reservists and National Guard members drives down the rate for the entire military to about 68%. The numbers vary widely between service branches, fueled in part by the differing deadlines and cultural reasons, The Post has found.

As vaccination rates rose, so did military deaths attributed to the more infectious delta variant, with 71 COVID-related fatalities in the ranks to date. In September, more military personnel died of coronavirus infections than in all of 2020. None who died had been fully vaccinated, said Pentagon spokesman Maj. Charlie Dietz.

Service members who refuse to get vaccinated face an array of potential discipline. The Air Force has said airmen who refuse can change their mind after speaking with their commanders or if their exemption request is denied, though further noncompliance will be met with an escalating set of punishments, including involuntary separation or possible courts-martial.

Similar violations could be handled differently in the other services, an approach that Rachel VanLandingham, a former Air Force lawyer and president of the nonprofit National Institute of Military Justice, called unfair. Defense Secretary Lloyd Austin can and should impose a standard of accountability, removing commanders from the process and limiting punishment to administrative discharges, rather than sending decisions to military courts, she said.

Austin will likely not do that, she said, because the services "are parochial and don't want to give up power."

Nearly 40 recruits in the Air Force training pipeline were recently forced out for refusing the vaccine, officials said. They were sent home using a discharge method to easily banish recruits who fail to meet standards before officially entering the military.

Airmen who decide to leave the military over the coronavirus vaccine requirement may face similar problems if they want to transition to federal government employment or jobs with government contractors, which are popular draws for veterans but now require immunization as well.

The Washington Post's Michelle Boorstein contributed to this report.