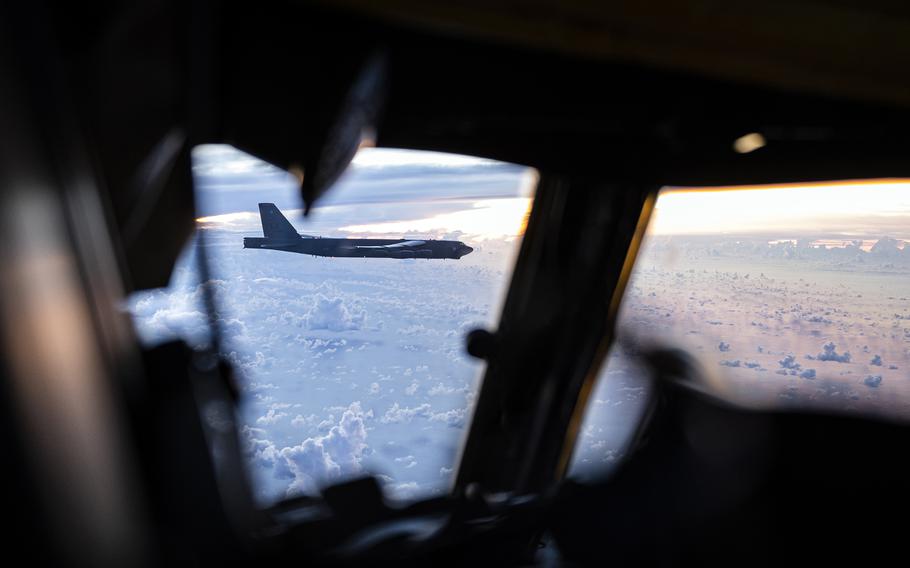 A B-52H Stratofortress assigned to the 2nd Bomb Wing at Barksdale Air Force Base, La., returns to base after an Indo-Pacific mission, Sept. 9, 2021. (Devin Rumbaugh/U.S. Air Force)

Three Russian fighters intercepted a U.S. B-52H Stratofortress bomber Sunday near disputed territory that is claimed by Russia and Japan, according to Pacific Air Forces.

“A U.S. Air Force B-52H Stratofortress positively identified and observed three Russian Sukhoi-35S fighters in the vicinity of Iturup over the Sea of Okhotsk in the early morning, 26 September,” PACAF spokeswoman Capt. Veronica Perez told Stars and Stripes in an email Tuesday, using the Russian name for an island the Japanese call Etorofu.

PACAF did not identify the unit that the bomber is assigned to or say where it took off from or what its mission involved.

The incident was first reported by the Russian state news agency TASS on the day it occurred.

Russia’s military announced plans to expand its military facilities on Etorofu in August and troops have been conducting live-fire military drills there this month, the Reuters news agency reported Sept. 8.

After World War II, Russian troops occupied the island and three others nearby and expelled 17,000 Japanese residents. The dispute over the islands, which Japan calls its Northern Territories and Russia calls the Southern Kurils, remains a source of tension and the reason the nations have yet to sign a peace treaty 76 years after the war.

Before the U.S. bomber was intercepted on Sunday it was detected over the Pacific Ocean by air defense radars in Russia’s Eastern Military Region, TASS reported, quoting the command center.

"The fighters' crews identified the target as a strategic B-52H bomber of the US Air Force and escorted it over the Pacific Ocean. There were no violations of Russia's state border or dangerous proximity of planes in the air," the center said, according to the agency.

The Russian fighters returned to base after the U.S. bomber moved away from the Russian border, TASS reported, quoting the country’s military.

The U.S. bomber operated in a safe and professional manner in accordance with international laws for airspace operations, Perez said.

“Our aircrews frequently encounter safe and professional intercepts, and when it is otherwise, we have procedures in place to address it,” she said. “We will continue to use international airspace in accordance with international law and expect others to do the same.”

Russia has been restoring its military capability on Etorofu, which had degraded during the post-Soviet era, said James Brown, an international affairs expert at Temple University’s Japan campus, in a telephone interview Wednesday.