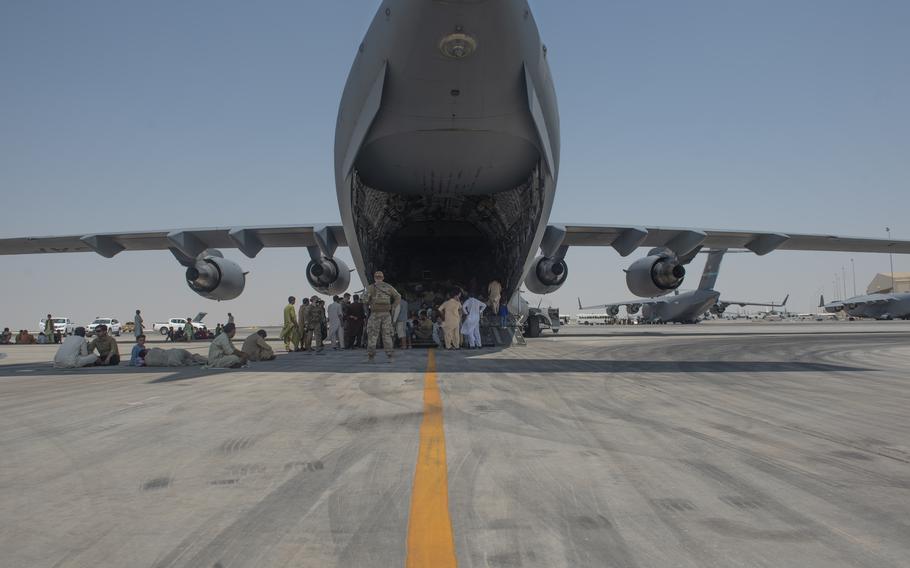 DAYTON, Ohio (Tribune News Service) — The 445th Airlift Wing, based at Wright-Patterson Air Force Base, played a role in the Afghanistan withdrawal, according to the Air Force Reserve Command, of which the 445th is a part.

In all, Air Force Reserve Command contributed 17 aircraft to the ongoing effort, including C-17 Globemaster III's, C-130 Hercules, C-5M Super Galaxy's, and the KC-10 Extender "with 73 aircrews and hundreds of maintenance, security, medical and support personnel," the command said.

The 445th has nine C-17 Globemaster III aircraft, viewed as the "most flexible cargo aircraft to enter the airlift force," as a wing fact sheet puts it.

Interviews with 445th personnel involved with efforts in Afghanistan aren't being granted right now, a spokeswoman for the 445th said Monday. The withdrawal effort is scheduled to end Tuesday.

In many cases, Air Force Reserve Airmen blended into active duty, Guard and Reserve crews involved in the overall effort, the command said.

"The United States is the only nation capable of rapidly deploying forces to provide nonstop airlift operations at this scale," Lt. Gen. Richard Scobee, Air Force Reserve Command commander and chief of the Air Force Reserve, said in a statement. "It would not be possible without the support of our total force — active, guard and reserve citizen airmen — seamlessly integrating to execute the mission."

"Once again, our Air Force Reservists are proudly answering our nation's call, responding in less than 24 hours," he added.

Nearly 60% of America's mobility capacity resides in the air reserve component, "underscoring the importance of a total force approach," said Col Mark Villacis, the command's chief of mobility operations division. "An airlift operation of this historic magnitude can only be executed with total force integration."

Meanwhile, Afghanistan veterans and Gold Star families are wrestling with thorny feelings as the massive withdrawal and evacuation effort winds down.

Jim and Leslie Groves are the parents of Army Chief Warrant Officer III James E. Groves III, who was killed in March 2013 in Kandahar, Afghanistan. Their son was 37 at that time.

Jim Groves said he and his wife Leslie, of Kettering, professed to having "mixed feelings" on the topic. Mrs. Groves called it a "touchy subject."

"I just think it's a sad day for America," Jim Groves said Monday.

"We share a loss of the 13 lives," Mr. Groves said, referring to the 13 American service members killed at the Kabul airport Thursday. "And it also brings back our own loss, as well, and takes us back to that day."

What concerns him the most: "We pulled those people out (U.S. military forces) before we pulled out civilians. I don't understand that logic. Common sense would tell you, if you're in a burning house, you don't call the firemen away."

The Groves said they don't necessarily have a problem with the idea of a withdrawal. But Mr. Groves said he has concerns about the manner in which this withdrawal was conducted.

"I don't understand abandoning the equipment," he said. "I mean, my God, talk about fast and furious on steroids."

"I think we put our troops in a real bad situation."