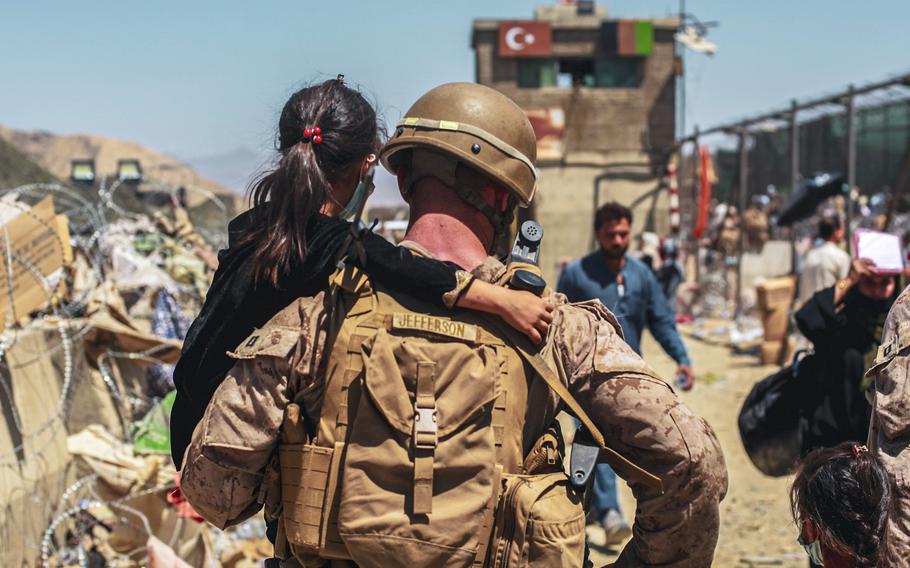 Price told reporters that since August 14 — the day before Kabul fell to the Taliban — at least 5,100 American citizens have been evacuated, including 300 in the previous 24 hours.

Sher Jan Ahmadzai, director of Center for Afghanistan Studies at the University of Nebraska Omaha, said some U.S. citizens of Afghan descent may stay behind because they are politically aligned with the Taliban and do not feel threatened.

For others, he said, family ties can’t be broken. Ahmadzai said an acquaintance with legal U.S. status, but not citizenship, had to make a “horrific choice” — returning to Afghanistan just days before the government’s collapse so he could be with his wife, children and parents.

Following the bomb attack Thursday that killed 13 US service members and as many as 170 Afghans outside Hamid Karzai International Airport, State Department personnel reached out once more to Americans who US officials believe may want to leave, Price said.

Among those who are undecided, many are changing their minds multiple times a day.

The number who don’t want to leave because they may have family in the country is “relatively small,” he added.

Secretary of State Antony Blinken told reporters Wednesday that the department was still trying to reach 1,000 potential citizens to ascertain their status. “Some may no longer be in the country. Some may have claimed to be Americans but turn out not to be. Some may choose to stay,” Blinken said.

He said Americans aren’t required to tell the US Embassy they are there — or that they are leaving. It’s also up to them if they want to stay. Blinken said that given the security situation, the State Department has cautioned against traveling to Afghanistan for many years. And since March, the department has sent Americans in Afghanistan 19 separate messages “encouraging and then urging them to leave the country.”

“We even made clear that we would help pay for their repatriation, and we’ve provided multiple communication channels for Americans to contact us if they’re in Afghanistan and want help in leaving,” Blinken said.

He said many of those who have previously chosen to stay are dual citizens who consider Afghanistan their home, who have lived there for an extended period of time or who want to stay with extended family there. Blinken said during the brief Wednesday that some had indicated they were still deciding whether to stay “based on the situation on the ground that evolves daily — in fact, that evolves hourly.”

“Some are understandably very scared,” he said. “Each has a set of personal priorities and considerations that they alone can weigh. They may even change their mind from one day to the next, as has happened and will likely continue to happen.”

Mustafa Babak, a board member with the Afghan-American Foundation and a diaspora researcher, said his homeland is extremely dangerous for any U.S. citizens who remain.

“The situation is so uncertain and volatile,” said Babak, adding that his brother escaped on an evacuation flight just an hour before Thursday’s bomb attack. “I think anyone caught with a U.S. passport would face a lot of risks.”

Babak said the danger is not just from Taliban, but from the rival ISIS-K extremist group. Americans of Afghani lineage might be able to go undetected, he noted, but for others “there is almost no way for them to blend in.”

Haroon Azar, a senior fellow at UCLA’s Burkle Center for International Relations, agreed. “If it were my friends or family, I wouldn’t recommend it,” he said. “There are too many unknown variables.”

Azar said those deciding to stay may feel they have little choice, compelled by dedication to family or duty to a profession such as journalism or missionary work.

After the bombing Thursday, CNBC reported that “many, if not most” of about 660 US citizens contacted in recent days were “nearly or already out of the country” but “dozens more” didn’t want to leave “for a range of reasons.”

Vicki Aken, an American who runs the International Rescue Committee’s office in Kabul, told NPR that she is staying in Afghanistan to support the organization’s staff, 99% of whom are Afghans.

“They’re feeling like the world has abandoned them and that after August 31, no one will care,” she said. “And I know that’s not true. I’m an American myself. I know my people care.”

The IRC began working in Kabul in 1988 and continued its work there when the Taliban governed Afghanistan before the US invasion in 2001. The organization works with villages across the country on development projects, providing safe places to learn in rural areas and helping displaced families find clean water, and other necessities.

On Thursday, the organization said it feared an increase of violence against women and girls, who comprised 46% of civilian casualties in the past year.

IRC did not immediately return a message Friday inquiring about American staff like Aken staying in Afghanistan. Aken told NPR she was contacted by the American embassy and offered a chance to evacuate but she declined.

Price, the State Department spokesman, said US officials haven’t made any decisions yet about retaining a diplomatic presence in the country after the withdrawal deadline Tuesday but said “it is something we are actively discussing.”