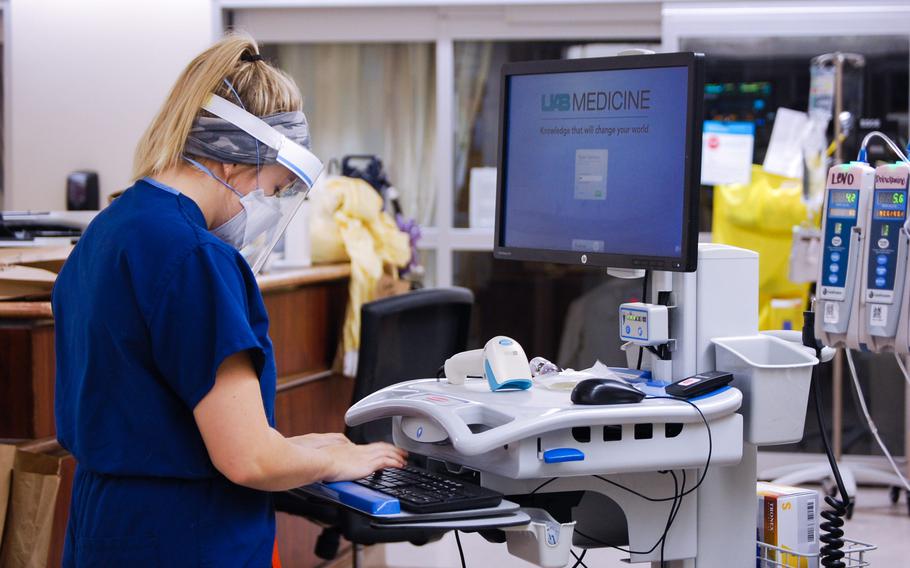 This undated photo provided by the University of Alabama Birmingham shows the inside of UAB Hospital's COVID-19 intensive care unit. (Contributed/TNS)

(Tribune News Service) — Dr. Scott Harris took a deep breath Friday morning, exhaling and dropping his eyes to a sheath of papers on the conference table before him.

The numbers in front of him were not good.

As of Thursday, 2,879 Alabamians hospitalized with COVID-19. More than 5,000 new cases on Thursday. There were 40 more ICU patients than beds in which to care for them, while critical patients were being kept in ERs or hallway gurneys until beds become available. Deaths were at 12,153 and rapidly climbing, with 50 reported Thursday alone.

“You’re the person who can make a difference. You need to be responsible for your behavior. You need to do what it takes to not continue this situation,” Harris said to the public, his voice tightening.

Harris on Friday appeared briefly overcome when sharing the landscape of Alabama’s coronavirus crisis, which has pushed the state’s health care system to the absolute brink. U.S. Air Force medical staff are deploying to a Dothan-area hospital to cover shifts around the clock amid a patient onslaught. State officials sent two mobile morgue trailers this week to Gulf Coast counties fearful of their capacity to store the increasing number of corpses left in the wake of the COVID-19 wave searing its way through Alabama.

“I don’t know how much longer we’re going to be able to do this,” Harris said.

The mild-mannered state health officer, an infectious disease specialist who trained as a doctor amid the HIV/AIDS epidemic in the 1980s, isn’t prone to hyperbole or wading into political waters. Harris typically fills his weekly conferences with facts, digestible data and asks the public to take appropriate, science-based precautions such as mask wearing.

But Harris admitted on Friday he was frustrated, and appeared exhausted, as safe and effective vaccine doses sit unused on Alabama shelves and schools debate mask mandates, despite consistent and clear advice from local pediatricians and experts.

The rare moment of public emotion echoes what hospital administrators, nurses, doctors, EMTS and other frontline workers have been saying for weeks: Health care capacity in Alabama is finite, and the state is running out of time to get the COVID-19 spread under control.

“So much of what we’re seeing is preventable. We worked on this for a year and a half. We’re seeing this because people don’t want to get vaccinated, they don’t want to change their behavior. They’d rather have an argument about masks than talk about how we can keep our children safe,” Harris said. “It’s very frustrating for all of us.”

State COVID-19 hospitalizations — of which 85% are unvaccinated patients, the Alabama Hospital Association reports, with vaccinated patients often immunocompromised prior to infection — are moving toward the state’s previous peak in January. But due to a staffing shortage in the state, the current patient lode is causing more strain than ever before during the pandemic.

When asked if Alabama hospitals would soon need to start triaging care to prioritize resources, a grim prospect the state has not yet encountered, Harris said he wasn’t sure, but the state has plans in place for field hospital type set-ups if capacity continues to decline.

“These what if questions are very frightening, but there’s a really simple solution,” Harris said. “Go get vaccinated, wear your mask, and we won’t have to worry about that situation.”

Meanwhile, cases among children continue to rise as a patchwork and ill-enforced system of masking policies have led to increased exposures inside classrooms, leading to a cascade of school closures across the state this week.

“I don’t see that ending immediately,” State Superintendent Ed Mackey said Thursday. “We think that will continue until the spike levels out.”

Harris said 20 U.S. Air Force doctors, nurses and respiratory technicians are slated to deploy to Southeast Health in Dothan within days. The team is expected to split into two 10-person units to work back-to-back 12-hour shifts for at least the next month.

The unit will join U.S. Department of Health and Human Services personnel in the state who are currently working in Foley. Harris said an HHS team was planning to assess a Dale County hospital for possible aid next week.

Even federal resources are strapped, Harris said earlier this week, with ongoing surges in other states.

“We’ve asked for the same sort of thing many more times,” Harris said of the teams being sent to south Alabama. “And the feds just don’t have anything to send us at this time.”