A year after doctors said he wouldn’t be allowed to commission, Air Force Academy graduate joins the Space Force Tanner Johnson's fiancee, Brynn Woodyard, pins on his second lieutenant bars at the commissioning ceremony for Cadet Squadron 14 at the U.S. Air Force Academy in Colorado Springs, Colo., May 25, 2021. Johnson was the first person diagnosed with Type 1 diabetes to commission into the U.S. military. (USAFA Association of Graduates Webguy)

A year before Tanner Johnson was due to graduate from the U.S. Air Force Academy in Colorado, he was lying in a hospital bed and doctors were telling his family he had two hours to live.

His organs were shutting down due to complications caused by Type 1 diabetes, an autoimmune condition where the body attacks the cells that make insulin.

Type 1 diabetes usually affects young children and runs in families, but none of Johnson’s relatives were diabetic. He was nearly 22 when he was diagnosed in May 2020, two months after most cadets had been sent home as the academy scrambled to contain the fast-spreading coronavirus.

Johnson pulled through the worst of the health crisis and began to deal with his new reality.

But he refused to accept what they said and set out to prove them wrong. He hoped to become the first person to be commissioned into the U.S. military with a medical condition that, up until then, was automatically disqualifying.

“If you have Type 1, you become not deployable because you are taking insulin shots,” said Lt. Col. Amy Carpenter, an assistant professor of biology at the academy and a certified diabetes counselor. 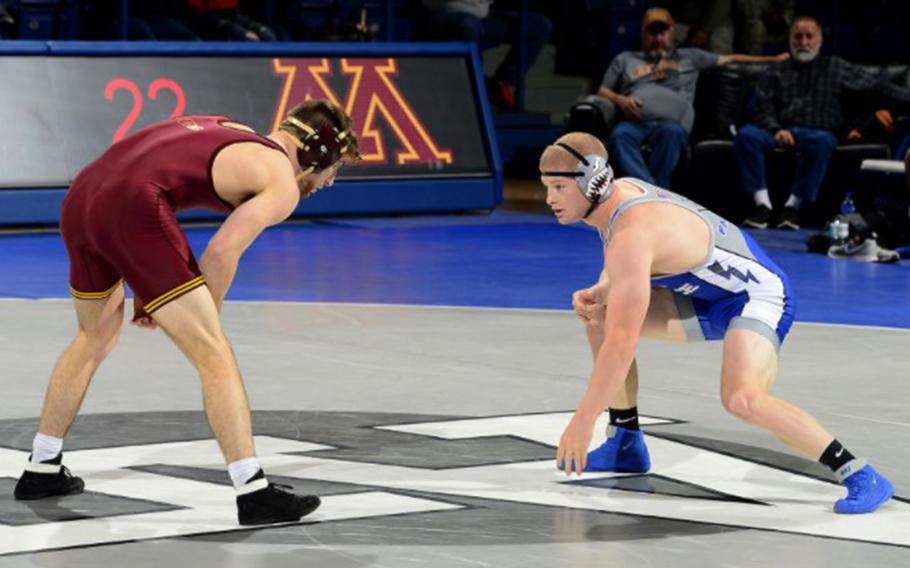 Air Force Academy cadet Tanner Johnson, right, wrestles against a University of Minnesota athlete in 2018. He continued wrestling competitively after he was diagnosed with Type 1 diabetes at the start of his senior year. (USAFA Athletics) Buy Photo
Newly commissioned second lieutenants from Cadet Squadron 14 at the U.S. Air Force Academy in Colorado Springs, Colo., drink a toast with leadership at their commissioning ceremony on May 25, 2021. Tanner Johnson, third from right, is the first person diagnosed with Type 1 diabetes to commission into the U.S. military. (Karin Zeitvogel/Stars and Stripes)

During her first decade in the military, Carpenter advised newly diagnosed service members about living with diabetes and prepared them for the end of their military career.

Academy officials allowed Johnson to return and he was referred to Carpenter for counseling. But that wasn’t what he was looking for.

“He came to me and said, ‘Ma’am, I know this is a long shot, but what if we could demonstrate that being a Type 1 diabetic does not have to be an automatic disqualifier?’” Carpenter said.

“I thought, ‘oh man, I’ve never had an example where you have Type 1 diabetes and the military retains you.’ So I told him, ‘Tanner, I know you’re in great control, you’re very knowledgeable about your condition, but get ready to get kicked out.’”

He didn’t. Instead, Johnson did “what everyone else did, and then some, to show that even with this condition, I could do everything that was required of me, and do it well,” he said.

He continued competing with the wrestling team during his senior year, with the tiny needle of a continuous glucose monitor in his stomach, he said. He signed up for more activities and raised his grade point average to the highest it had ever been.

And he talked to anyone who would listen about why he should be allowed to commission, laying out convincing arguments, including that technology has made it possible for diabetics to live nearly normal lives.

Insulin pumps can deliver a steady, 24-hour stream of the vital hormone, with a boost at mealtimes, while continuous glucose monitors keep tabs on blood sugar.

“Ten, 15 years ago, that technology didn’t exist,” Carpenter said. “With it, it’s no longer true that, ‘oh my God, I can’t fly this airplane anymore because I have to prick my finger and check my blood sugar or give myself a shot.’ Now, a diabetic can just look at their smartwatch and see that their blood sugar’s dropping too low, so they’d better drink some orange juice.”

With Carpenter’s help, Johnson conducted independent research into Type 1 diabetics in the military and other professions. 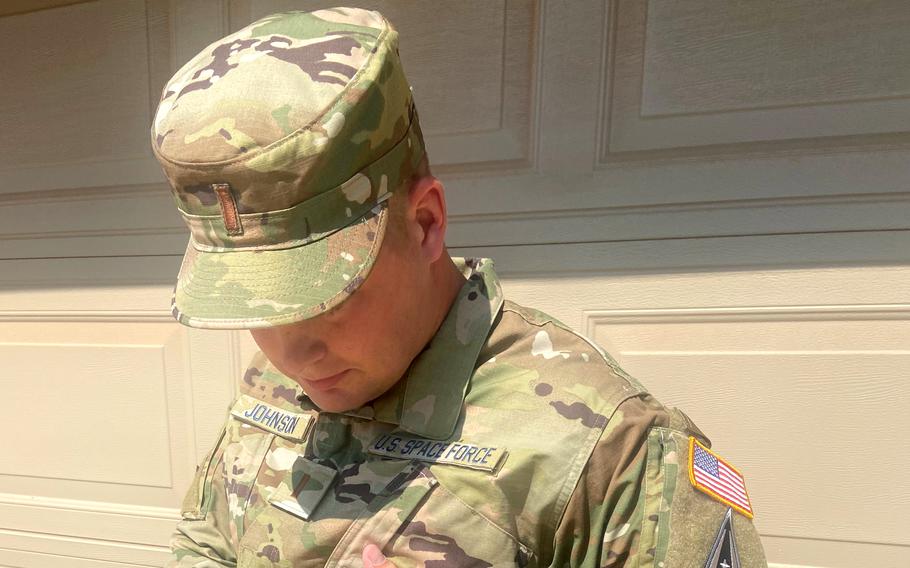 Space Force 2nd Lt. Tanner Johnson shows the continuous glucose monitor he wears on his abdomen to monitor his blood sugar. Johnson commissioned into the Space Force at a ceremony at the U.S. Air Force Academy on May 25, 2021, becoming the first person diagnosed with Type 1 diabetes to be allowed to join the U.S. military. (Tanner Johnson)

He found that they serve as police, firefighters and in other frontline roles, and that the Federal Aviation Administration last year approved the first commercial pilot with Type 1 diabetes. He uses a continuous glucose monitor, like Johnson does.

There are no precedents for insulin-dependent diabetics joining the military, but Army Sgt. Joshua Kirkpatrick of the 449th Theater Aviation Brigade won the North Carolina National Guard’s NCO Best Warrior of the year competition in 2017, three years after he was diagnosed with Type 1. He was already in the military when he became diabetic.

He entered the competition “because from day one when I was diagnosed with diabetes, they were constantly telling me that I’m unfit for the Army,” Kirkpatrick said in an interview posted on the Defense Visual Information Distribution Service at the time. “They said there’s no way I can compete with everybody else, and constantly I showed them I could.”

Attempts to reach Kirkpatrick for comment were unsuccessful. His former unit said he had left the Guard. The DVIDS report said proceedings were underway in 2017 to discharge him.

With time counting down to the day Johnson would have to leave the Air Force Academy, he continued to plead his case to be allowed to commission. Last fall, he approached academy superintendent Lt. Gen. Richard Clark and asked if he could have 10 minutes of his time.

“We spoke for nearly an hour,” Johnson recalled. “He said if I could wrestle and do everything required of me at the academy, there was no reason we couldn’t find a job for me in the military. And he went to bat for me.” 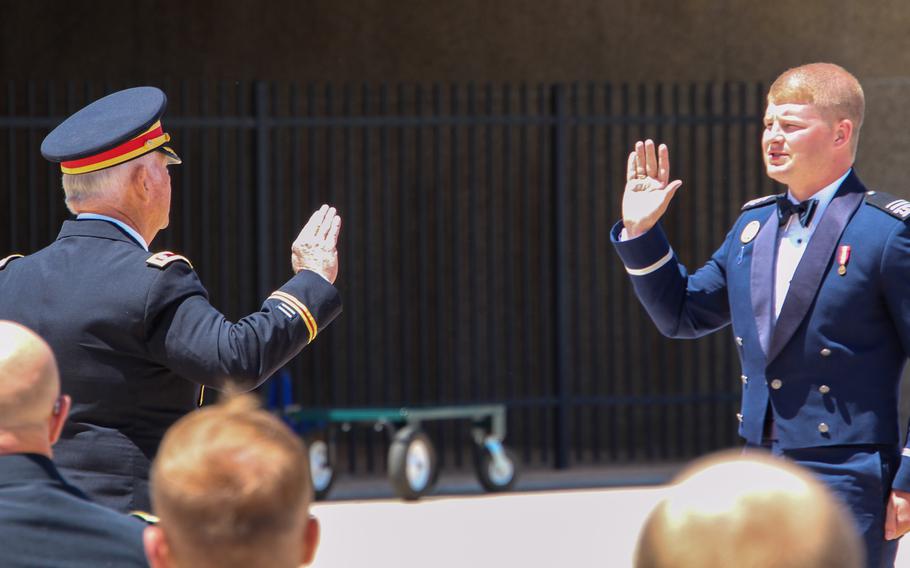 Tanner Johnson is sworn in as a U.S. Space Force officer by his grandfather, retired Army Lt. Col. Terry Johnson, at a ceremony at the U.S. Air Force Academy in Colorado Springs, Colo., May 25, 2021. A year earlier, Tanner Johnson was diagnosed with Type 1 diabetes and was told his military career was over. (USAFA Association of Graduates) Air Force Academy Cadet 1st Class Tanner Johnson, left, marches with Cadet Squadron 14 in the graduation parade at the Colorado Springs, Colo., service academy, May 25, 2021. Johnson was commissioned that day into the U.S. Space Force, becoming the first person diagnosed with Type 1 diabetes to be allowed to serve in the U.S. military. (Karin Zeitvogel)

There were still times when it seemed that he’d fail, but just weeks before the Class of 2021 became the largest graduating class in academy history on May 26, Johnson learned he would march into the football stadium with his squadron, wearing a grey sash to indicate that he was joining the Space Force.

Johnson and his wife, Brynn, arrived last week at Vandenberg Space Force Base in California, where the newly minted second lieutenant hopes to become an orbital warfare officer and help the U.S. use satellites to give it an advantage in space, he said.

He also hopes he can spur change and spare others the anguish he went through when he was diagnosed. He wants to be “the guy who demonstrates that the policy should change,” not the exception to an existing rule, Carpenter said.

“I was devastated to learn I had diabetes, and then I had to deal with the fact that everything I’d worked for might be taken away because the military might not accept me,” he said. “I want to be an example so that, when someone is diagnosed in the future, they won’t have that hanging over them.

“I want people to say, ‘Look at this guy, look at what he’s doing.’ I may never be an astronaut, like my mom seems to think I will, but I can manage my condition and serve my country,” he said.

“And if the astronaut door ever opens to diabetics,” he added after the briefest reflection, “I’ll walk through it.”