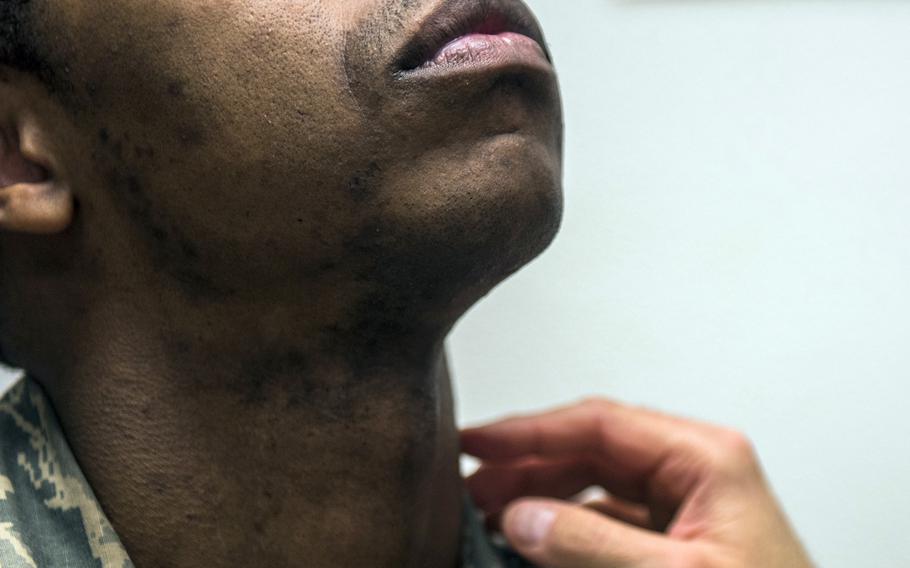 Airmen who receive waivers from the Air Force to grow beards due to a skin condition that worsens with shaving experience significant delays in promotion compared to their beardless counterparts, a new study found.

The delay in promotions affects Black airmen disproportionately because the condition, commonly called razor bumps, is prevalent among them, according to the study published in the journal Military Medicine on July 1.

The findings dovetail with an Air Force review of racial disparities in the service released in December, which found inequality in “certain promotion rates” based on race but did not determine cause.

The review was initiated in the wake of protests and outcry over the death of George Floyd in May 2020 at the hands of a Minneapolis police officer.

The survey for the study on shaving waivers and promotion was done in November and December 2020 by eight researchers affiliated with the Department of Dermatology, Uniformed Services University in Bethesda, Md. and other Air Force installations in Germany, Italy and the United States.

“We hope that the findings of this study shed light on this issue by showing that the promotion system is not necessarily inherently racially biased, but instead biased against the presence of facial hair which will likely always affect the promotions of Blacks/African-Americans disproportionately because of the relatively higher need for shaving waivers in this population,” the new study concluded.

Don Christensen, a retired colonel and former Chief Prosecutor of the Air Force, told Stars and Stripes during a phone interview Thursday that he was not surprised by the study’s findings.

“I've definitely seen Black service members who felt like they were treated differently because they needed to get a waiver,” said Christensen, who is now president of Protect our Defenders, an advocacy group whose May 2020 report revealed that the Air Force had long suppressed evidence of racial disparities in the service’s justice system.

“This is one of those cases when — looking at the data — it’s kind of hard to say that there isn’t a racial aspect to it,” he said. “Maybe that’s not the intent, but the reality is that, disproportionately, Black servicemembers need the waiver, and the waiver impacts promotion and opportunities. It’s affecting the Black community in a disproportionate rate.”

The Air Force, like other services, bans beards except for certain religious and medical exceptions. The service regards a clean-shaven face as professional looking and better able to accommodate the tight fit of a gas or oxygen mask, should one ever be needed.

Several previous studies had found that airmen with shaving waivers perceived delays in promotion, but the new study analyzed data comparing a group receiving waivers with another that did not.

The skin condition, formally known as pseudofolliculitis barbae, occurs when facial hair tightly curls and grows back into the skin. The skin becomes inflamed, with hardened bumps arising around ingrown follicles.

Shaving traumatizes the bumps, causing them to grow and scar.

Men of any ethnicity can experience the condition, but it is predominately found among Blacks.

Researchers of the new study based their findings on survey results from 9,339 airmen, among which 8,200 had never had a shaving waiver and 1,139 who had been on a waiver for at least one year of their career.

The majority of the waiver group, 64.2%, were Black – even though they represented just under 13% of the 9,339 survey respondents.

The non-waiver group was predominantly white at just over 76%.

The makeup of the two groups also differed significantly by rank, with the waiver group composed of only 5.5% officers, while the no-waiver group was roughly 28% officers.

Promotions for those in the waiver group were delayed evenly across race and ethnicity, the study said.

Airmen with shaving waivers are “disenfranchised” in various ways, the study said.

The Air Force’s Special Duty Catalog Guide, for example, “specifically states that members on a shaving waiver will not be allowed into the Honor Guard,” the study said.

The guide requires airmen to maintain the “highest levels of professionalism and personal appearance” for duties such as recruiting, military training instructor and the Thunderbirds flight demonstration team, the study said.

“This has, anecdotally, been used to exclude members with shaving waivers from these fields, all of which are high profile and can lead to faster promotion,” the study said.