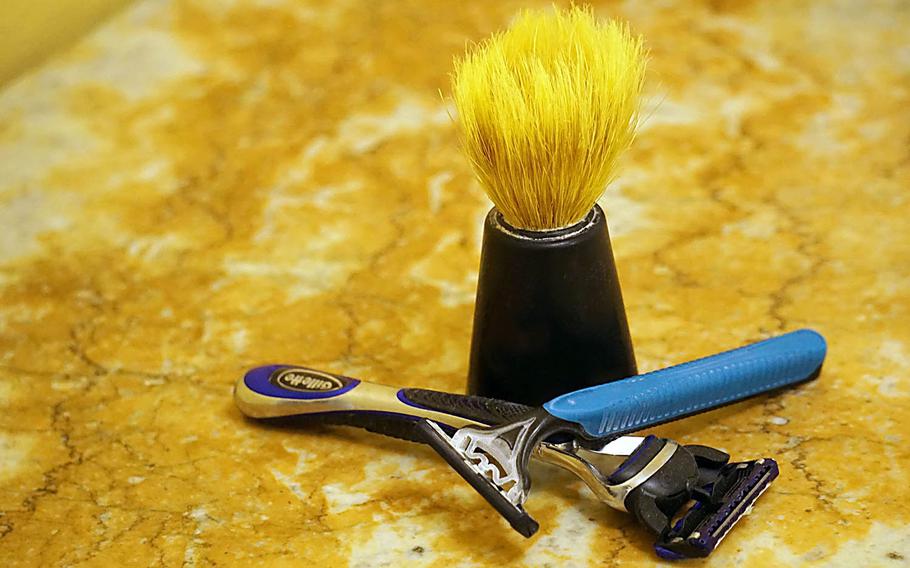 The Navy halted permanent shaving waivers on Oct. 4, 2019, following a series of reviews by the Naval Safety Center that said beard hair posed a safety risk for face seals on breathing devices such as respirators. (Pixabay)

The Navy halted permanent shaving waivers on Oct. 4, 2019, following a series of reviews by the Naval Safety Center that said beard hair posed a safety risk for face seals on breathing devices such as respirators. (Pixabay) Recruits touch up their shave in preparation for an inspection inside their compartment in the USS Arleigh Burke barracks at Recruit Training Command, Oct. 31, 2018. (Spencer Fling/U.S. Navy)

The Navy is reviewing a policy that did away with permanent shaving waivers for sailors diagnosed with razor bumps after receiving feedback through recent diversity and inclusion initiatives, the chief of naval operations said Tuesday in an interview with Defense One.

The Navy, under Adm. Mike Gilday’s leadership, halted the waivers, often referred to as “no-shave chits,” on Oct. 4, 2019, following a series of reviews by the Naval Safety Center that said beard hair posed a safety risk for face seals on breathing devices such as respirators.

Beards are typically not allowed in the service except for religious and medical exemptions.

Razor bumps, also known as pseudofolliculitis barbae, occur predominantly in African Americans, according to the Navy. They occur when curly beard hair curves back into the skin after shaving.

“It’s something that we’re taking a look at with the inclusion and diversity task force,” Gilday said when asked if beards were “coming back in the Navy.” The interview with Defense One was posted to YouTube.

“We made a decision pretty early in my tenure as CNO to do away essentially with no-shave chits,” he said. “Some would argue that I moved too fast with that decision and that some were disadvantaged by it.”

Gilday said his thinking at the time was protecting sailors during fires. However, he said he is open to revisiting the decision after receiving the feedback.

Of the more than 337,000 sailors in the Navy, about 6,000 each year are treated for razor bumps, Cmdr. Thomas Barlow, a dermatologist at Naval Medical Center San Diego, told Stars and Stripes last year. The Navy tracks people treated for the condition but not how many permanent waivers are issued.

The Navy maintains the condition is treatable, Navy documents said. Treatment options have included face creams and allowing sailors with no-shave chits to grow beard hair up to one-quarter inch in length.

In the aftermath of Gilday’s decision, sailors with permanent waivers were given six months to undergo a medical re-evaluation and to establish a new treatment plan, the Navy told Stars and Stripes last year. Temporary waivers are still authorized for up to 60 days to help manage the skin condition.

If creams and growing hair out do not work, the Navy also offers laser treatments that can kill some of the hairs over time and thin out the beard, Barlow said.

Beards have come and gone throughout the service’s history, according to a 2014 article by the U.S. Naval Institute. Units stationed in cold weather duty stations, on submarines or those out at sea, at times, were allowed facial hair, usually within limits.

Adm. Elmo Zumwalt Jr., who became CNO in 1970, relaxed grooming standards to include long hair, beards and sideburns, according to the institute. Zumwalt thought it would help reduce racism and sexism, improve the Navy’s image and boost recruitment and retention.

Another former CNO, Adm. James Watkins, banned all beards in 1984 during the Reagan administration, the article said. It was not a popular move.

The Navy’s diversity and inclusion task force, called Task Force One Navy, was launched in June in the wake of nationwide protests that followed the May 25 killing at the hands of police of George Floyd, a 46-year-old African American, in Minneapolis.

The goal of the task force is to listen to sailors at every command, at every level, and make recommendations for reform in key areas like recruiting, promotion, health care and military justice. Rear Adm. Alvin Holsey, an African American, heads the task force, which is composed of officers, enlisted personnel and civilians.