Teen heading to the military raised $38,000 by cutting off his 19-inch Afro. He gave the money to help kids with cancer. 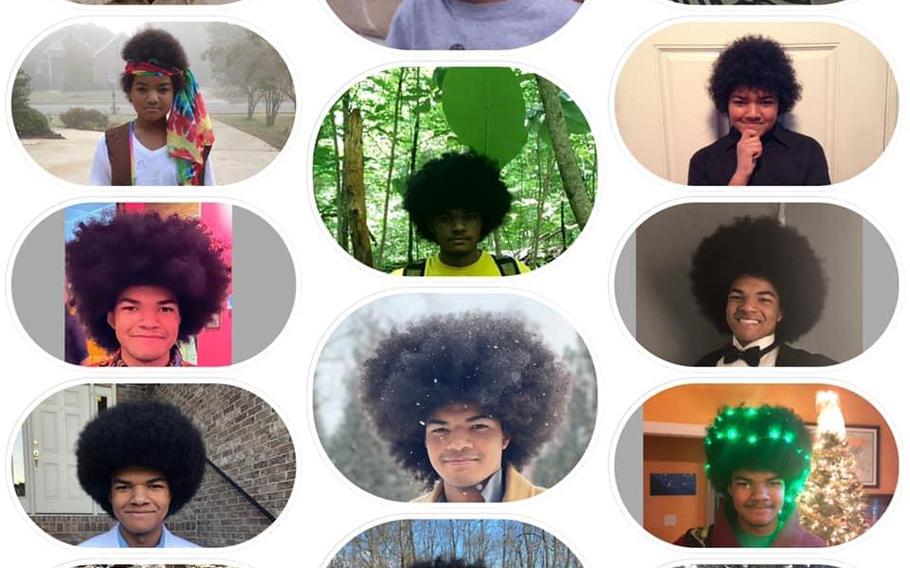 Ever since Kieran Moïse was a child, he stood out for his hair - a stunning Afro that stood high and wide above his head. For the past six years, Kieran opted to not cut or trim his impressive curls.

But when it was time to cut his hair because he was joining the United States Air Force Academy, Kieran, 17, figured that if his hair could no longer be big, at least the event could be: He invited the community in Huntsville, Ala., to watch him get his 19-inch curls shorn off in a charity drive to benefit kids with cancer. Hundreds participated, and his haircut raised $38,000.

"My son has always had a huge heart," said Kelly Moïse, 49. "He was determined that if he was going to have to get a haircut anyway, then he should pay it forward in a way that would help as many people as possible."

Kieran lost a close friend to cancer when he was in eighth grade, she said, so he decided his fundraiser would benefit two causes:

He set a goal to raise $1,000 per inch for his Afro and give the proceeds to St. Jude Children's Research Hospital in Memphis, she said. Then he planned to donate his curls to Children With Hair Loss, a Michigan nonprofit that provides free human hair wigs to children and young adults with medically related hair loss.

Kieran is now at the Air Force Academy in Colorado Springs and, by military policy, is not allowed to communicate with the outside world for another month or so, his mom said. But she said he hopes his story will inspire others to do what he did after getting his first haircut in about six years.

"He wants people to know that if he can donate his hair, then anyone can," said Kelly Moïse. "He's hoping that everyone will be encouraged to go out there and commit their own small act of kindness."

When Kieran was born on July 9, 2003, something was immediately obvious to Moïse and her husband, Patrick Moïse.

"He was born with a beautiful headful of hair, and for his entire life, that's the first thing everyone noticed about him," said Kelly Moïse, who works as a financial adviser. "Everywhere he went, he was the guy with the big hair. There was no way not to notice it."

Over the years, she and her husband, a technical director for Lockheed Martin in Huntsville, snapped numerous photos chronicling the growth of their son's Afro as he combed it to new heights.

Kelly Moïse, who also has a grown daughter from a previous marriage, got in some extra hair styling practice as Kieran entered his teen years, she said.

"Every Sunday night, I'd help him condition it one section at a time while he sat through two movies," she recalled. "That hair was a huge part of his personality."

Family photos show Kieran being cheeky with his hair: hiking in the woods with a giant leaf on his head, and for Christmas one year, he even strung his hair with a crown of blinking lights.

"We call it the 'evolution of the curls,'" she said. "The main reason he initially grew it out was because he really hated haircuts."

Even though he knew he would ultimately have to shave his head if he attended the Air Force Academy, Kieran said it was worth it, according to his parents.

"He knew from a very young age that he wanted to be an engineer and an astronaut," said Patrick Moïse, 56. "Being accepted at the Academy was a dream come true, but also part of his path to doing great things."

Although Patrick Moïse said he often chided his son to get a haircut, he was supportive when Kieran told him that he was thinking of donating his curls someday to help children who had lost their hair to cancer treatments.

"He has a heart filled with compassion and a desire to give back," he said.

Kelly Moïse said they were elated when Kieran was accepted into the Air Force Academy in the spring.

They were extra delighted, she said, when he announced that he was going to print up some fliers and hold a Kieran's Curls for Cancer fundraiser, inviting everyone to watch him have his Afro shorn off at a local brewery that donated the space.

People started donating to the fundraising site he set up, and on May 29, a few days after his graduation from New Century Technology High School about 100 people showed up at Straight to Ale to watch him get the job done.

"My hair was always the thing people noticed me for," Kieran told local television reporters right before his mom, friends and a few favorite teachers sectioned his hair and took turns cutting it off.

"I'll lose part of my personality, but I'll also gain something," he said.

Kieran's hair was braided and cut, then Jeff Johnson, the family barber Kieran had avoided for years, enthusiastically agreed to sharpen his clippers and do the final honors at the fundraiser, which ultimately brought in more than $38,000 for St. Jude Children's Research Hospital.

"I've been trying to get my hands on this kid's hair for years!" Kelly Moïse recalled Johnson saying as he went to work.

"I was pretty emotional when he shaved Kieran's head, but I was also feeling really proud," she said.

Everyone laughed and applauded at the end when her freshly shorn son announced his head was cold, she said.

After Kieran's curls were carefully wrapped up and mailed to the children's hair charity in Michigan, the Moïses drove their son to Colorado Springs and watched in tears as he walked up the front steps of the Academy.

"He's going to do great things," Kelly Moïse said. "I have no doubt."