Obituary: Henry Parham, last of a Black unit that fought on D-Day, dies at 99 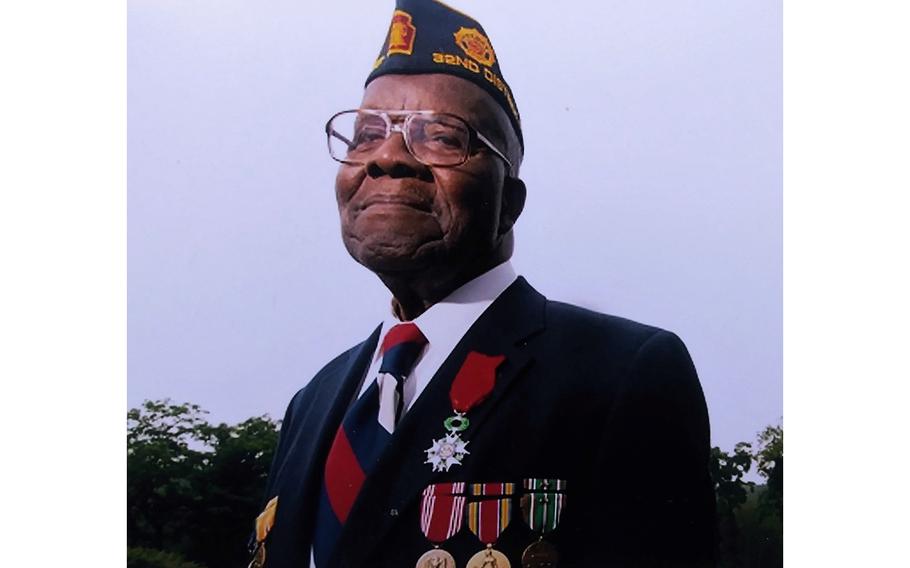 (Tribune News Service) — Before 2009, the 65th anniversary of the D-Day invasion at Normandy, Henry Parham got little recognition for his role as an African American soldier in a segregated Army during one of the most important — and bloodiest — battles of World War II.

When writers and historians figured out that the Wilkinsburg man was likely the last surviving African American combat veteran of D-Day, as his wife, Ethel Parham, puts it, "All hell broke loose."

"We were just plain, simple people; we weren't looking for awards and all that stuff. Then all of a sudden, people got interested when they heard his story," said Ethel Parham, his very sprightly wife of 47 years. "Every Tom, Dick and Harry called here and wanted an interview, interview, interview. Before that, nobody really bothered. But after the 65th anniversary, people's eyes were really opened."

A veteran of the 320th Anti-Aircraft Barrage Balloon Battalion, the only all-Black unit to land on the beaches of Normandy on D-Day, June 6, 1944, Parham died Sunday of bladder cancer. He was 99.

His loss marks the end of an era.

The son of a sharecropper in Emporia, Greensville County, Va., Parham was raised primarily by an aunt while his mother worked out of the home and his father spent his days in the fields, growing everything from corn and cotton to peanuts and soybeans.

Parham's education was typical of that era in the Jim Crow South, his wife said.

"In Virginia in 1921, if you were Black, you went to a one-room schoolhouse, where the teacher taught all ages, all day long," Ethel Parham said. "The highest education they had in Emporia, Va., was 7th grade for Black folks."

At 17, Parham moved to Richmond, Va., where he found work as a porter for National Trailways bus lines.

He was drafted into a segregated U.S. Army at 21 and trained at Camp Tyson, Tenn., with the 320th, before shipping out to England in 1943 for additional training in anticipation of the Allied invasion of Northern France.

D-Day was his first combat experience.

Parham's unit landed at Omaha Beach — by far the deadliest landing spot on D-Day among the five beaches used for the invasion — at 2 p.m., as part of the third wave.

His unit was spared the massive casualties that were encountered by the first wave of infantry, Parham said in an August 2012 interview for the Veterans Breakfast Club.

Parham shared vivid memories of seeing comrades drown and Nazi air bombardments above him as he and his unit waded ashore, while landmines and other obstacles planted by the Germans forced the soldiers out of their boats and into the surf.

"We landed in water up to our necks," Parham said, recalling a shorter man in his unit who had to be carried onto the beach because the water was over his head and he couldn't swim. "Once we got there, we were walking over dead Germans and Americans on the beach, it was so heavily mined. While we were walking from the boat to the beach, bullets were falling all around us."

His unit dug foxholes on the beach during the day and used the cover of darkness to launch helium-filled barrage balloons over the combat area, forcing German bombers to fly at higher, less effective altitudes.

From the balloons hung steel cables, fitted with small packs of explosive charges, which could — and did, even on that first night of June 6 — destroy the wings and propellers of aircraft that became ensnared in the cables.

"We only flew them at night, between dusk and dawn," he said in the VBC interview at the Gettysburg Room in the Soldiers & Sailors Memorial Hall and Museum in Oakland.

Parham's unit spent the next 68 days on Omaha Beach, where they deployed improvised winches to raise and lower the balloon defense system, ensuring that reinforcements and supplies made it through, while preventing German strafing attacks on the beach.

"I was fortunate that I didn't get hit. There was no place to hide," Parham said in a 2013 Pittsburgh Post-Gazette story marking his elevation as a "Chevalier" — a recipient of the Legion of Honor by the French government.

The highest military distinction in France, the Legion of Honor was established by Napoleon Bonaparte in 1802 and in recent years has been awarded to World War II soldiers who participated in one of the four major campaigns in France: Normandy, Provence, Ardennes or Northern France.

"First, my sincere condolences to the Parham family," Wilkinsburg Mayor Marita Garrett said. "I am grateful for his legacy of not only military service, but public service that Mr. Parham exemplified in this region and nation. In 2019, I had the honor of recognizing Mr. Parham with a proclamation noting his outstanding service to our country.

"He forever will be a hero."

After Normandy, Parham's unit moved on to Sherburne, France, where it provided defense for Gen. George Patton's 3rd Army.

He returned to the U.S. in November 1944 — 11 months after landing in England. His unit resumed training, this time for fighting in the South Pacific.

"We were supposed to be in Okinawa, but the boat we were on broke down, and we missed the convoy," Parham told the PG in August 1998 during a local screening of "Saving Private Ryan."

"We missed that battle, and before we could see battle again, V-J Day happened," he said. "I wasn't exactly disappointed about that, though."

When he returned to Virginia, Parham wasn't surprised to find that African Americans were still treated as second-class citizens, despite serving their country and even dying for it.

"I wasn't disappointed because I grew up under those conditions," he said in the Veterans Breakfast Club interview.

Parham got his job as a porter back after the war and came to Pittsburgh in 1949, where he spent 34 years as a heavy equipment operator at the Buncher Co. before his retirement at age 65.

He met fellow southerner Ethel Perry in Pittsburgh in the 1960s while she was working in a restaurant and studying to become a certified nursing assistant.

"I was a waitress, and he ate his breakfast and his dinner at the restaurant where I was working," Ethel Parham recalled, her soft Louisiana drawl still detectable.

The couple married in October 1973 and made their home in East Liberty for 27 years before moving to Wilkinsburg 20 years ago.

Ethel Parham began volunteering at the former Veterans Affairs Hospital on Highland Drive in Lincoln-Lemington more than 40 years ago and convinced her husband to join her when he retired.

"We were a husband-and-wife team at the VA on Highland Drive, then after it closed, we continued to volunteer at the Oakland VA," she said. "I've been volunteering longer than him, but who's counting? The only thing that's important is that you bring joy to these patients' bedside. You talk, you make them laugh and forget their troubles."

Parham was a 67-year member of the American Legion Post 577 in Squirrel Hill and also volunteered for many years with the Saint Mary Magdalene Parish in Point Breeze.

Her husband had no regrets, Ethel Parham said.

"He lived a good life. He was well taken care of, and we traveled and had a beautiful life," she said. "I thank God that he lived long enough to get these accolades. He deserved it."

Despite not knowing how to swim, Pfc. Parham wasn't afraid that he would drown that day 77 years ago on the beaches of Normandy, he told CNN in 2019.

"I prayed to the good Lord to save me," he said. "I did my duty — I did what I was supposed to do as an American."

Parham was preceded in death by his siblings, Mary Sayles and Timothy Parham.

His public viewing will be from 4-8 p.m. Sunday at Rose Funeral Home, 10940 Frankstown Road, Penn Hills, where the American Legion will conduct a service at 7 p.m.

Funeral services will begin Monday at 11 a.m. at the funeral home, followed by a graveside service at Allegheny Cemetery.