Joyce Johnson of Racine, Minn., will be awarded six medals for his military service on his 100th birthday. (Contributed photo)

(Tribune News Service) — Seventy-seven years after going on his last bombing run as a pilot during World War II, Joyce Johnson is getting the service medals he earned but never received.

And it will happen on his 100th birthday.

Johnson was a pilot of the Boeing B-17 Flying Fortress, a four-engine heavy bomber that became a symbol of American air power during the war. Johnson served in active duty as part of the mighty Eighth Air Force from June 1944 to July 1946, and in the reserves afterward, attaining the rank of captain.

It’s not clear why he wasn’t awarded his medals, but his daughter, Vicki Hoover, called her dad a “pretty humble guy.” Johnson was in his early 20s when he participated in the very last bombing run of the war, an attack on an armament factory in Pilsen, Czechoslovakia, in 1945.

After the war, Johnson stayed on with the 384th Bomb Group, conducting non-combat missions that included, among other things, photographing and mapping the European continent. Johnson, of Racine, Minn., was also a test pilot. After that, he was transferred to the 306th Bomb Group and was given a hand-picked crew. Called the Number One Crew, it was given special non-combat missions.

He will be awarded his medals on Tuesday, July 20, at Soldiers Field Veterans Memorial in Rochester. The event, sponsored by the Veterans and Emergency Services Museum, starts at 5 p.m.

Johnson is getting his six medals at this particular time for one reason. Dick Krom, director of the Veterans and Emergency Services Museum, made it his personal mission to make it happen.

Krom said he first met Joyce and his daughter at a Veterans Day breakfast five or six years ago. Krom runs a roundtable that seeks to preserve the stories of the men and women who served their country, and he found himself fascinated with Johnson’s war experiences.

“He said they never flew any milk runs,” Krom said. 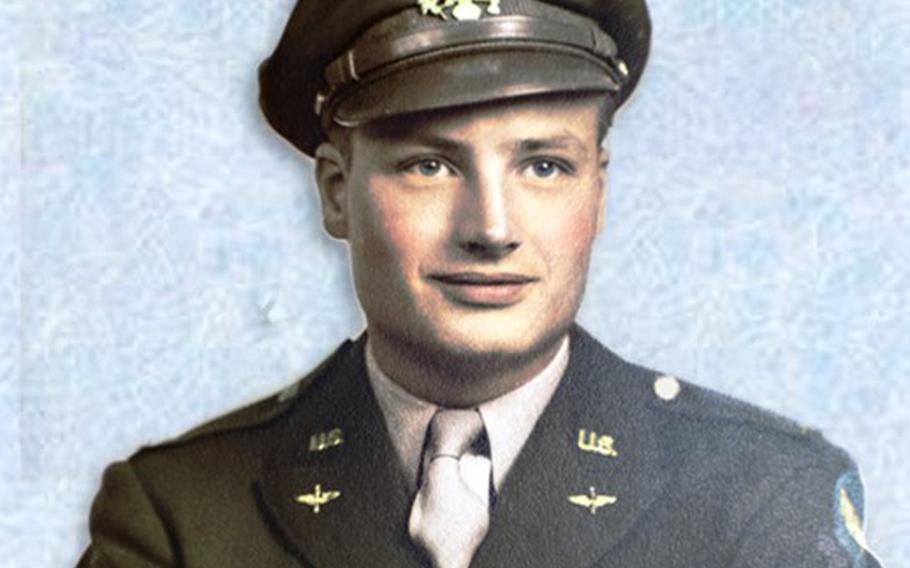 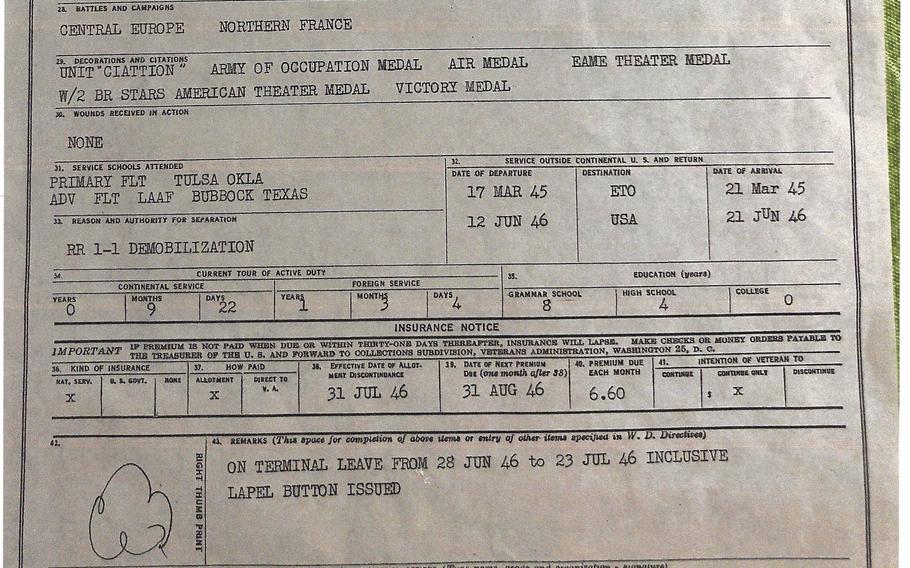 A month ago, Krom learned from Hoover that her dad’s 100th birthday was coming up. When he also found out that Johnson had never received his World War II medals, Krom was determined to rectify the oversight.

“I was absolutely flabbergasted when I found out that he had never gotten the medals and ribbons that he had earned, and then I started doing research,” Krom said. “You can’t get any of the stuff unless you got the papers which prove that he had served.”

Documentation about Johnson’s military service appeared to prove elusive. One of Johnson’s sons had tried to obtain the medals for their dad years ago, but a U.S. Department of Veterans Affairs official told him that there had been a fire in the building that housed his records and the records had been destroyed. That seemed to end the matter.

“We had given up on the idea,” Hoover said.

At Krom’s urging, Hoover searched her dad’s house and was able to find Johnson’s discharge papers. Listed on the yellowing 75-year-old paper were the medals that Johnson was entitled to: a Unit Citation, an Army of Occupation Medal, an Air Medal, a Europe-African-Middle-Eastern Theater Medal with two Bronze Stars, an American Theater Medal and a Victory Medal.

But even with paper in hand, Krom faced an excruciatingly long process. A veterans service official told Krom that, working through government channels, it could take months, if not years, for Johnson’s medals to arrive, given the pandemic-related backlog of requests and general bureaucratic sluggishness. Krom felt he didn’t have years to wait.

So instead, he found the company that makes the medals and ordered them. Nathan Pike, an Olmsted County veterans services official, said there was nothing wrong with doing it that way.

“I think it’s appropriate,” Pike said. “It’s important for our mature veteran population who did their time, they got home and they got busy living. Now in their mature years or waning years, people are like, ‘Hey, tell us about your war experience?’ ”

When the war started, Johnson wanted to enlist and fly planes, but two years of college was required for pilot training, which he did not have.

A cousin in Canada urged him to join the Royal Canadian Air Force, which didn’t require college to enlist as the U.S. did. In need of manpower, the U.S. changed its rules, waiving the two-year college requirement if a person could pass an equivalency test. Nicknamed “Einstein” by his high school classmates for his quick intelligence, Johnson passed.

Johnson was part of an armada of B-17s that attacked the Skoda Armament plant in Czechoslovakia in 1945, as the war was winding down. The factory produced tanks, heavy guns, and ammunition, but war planners doubted that they would reach the front in time to affect Allied advances. But they feared that the Soviet Union, on the march through Eastern Europe, would strip all usable equipment from factories in the territories it occupied and ship it home to rebuild its post-war industry and military strength.

Johnson told a World War II roundtable in 2011 that in order to protect civilian lives, the Czech people were warned of the mission and told to get out of the factory. But the warning let the Germans know the attack was coming, dramatically increasing the risk of Allied casualties.

Flying a zigzag route to confuse the Germans, Joyce was flying co-pilot at the time, and he and the pilot were supposed to share flying duties during the 10-hour mission.

But the pilot was having trouble staying in formation, so Joyce piloted the entire mission. No enemy fighters were seen, but black smoke obscured visibility from all the flak. Many planes were shot down due to the advanced warning. But the factory was taken out.

“It’s quite a surprise to us,” Hoover said about the effort to get Johnson his medals. “We weren’t expecting it at all. Our family is extremely grateful to Mr. Krom for his countless hours of work and determination to make this happen, and to make it a very special event to celebrate both Dad’s service and his 100th birthday!”

Visit the Post-Bulletin at www.postbulletin.com