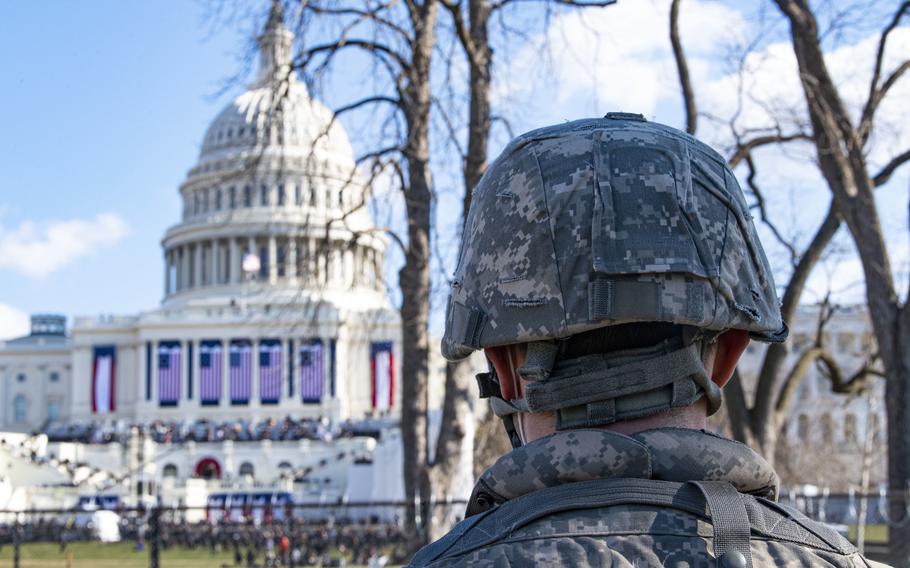 WASHINGTON — One of the largest cohorts of veterans in years is now on Capitol Hill.

Once the House chooses a speaker and members are sworn in, the 118th Congress will include 97 members with military experience representing 36 states. It is the biggest share of veterans in the legislature since 2015.

Among the 19 freshmen are Congress’ first two Black graduates of West Point: Rep.-elect Wesley Hunt, R-Texas, and Rep.-elect John James, R-Mich. Both spent eight years in the Army, where they flew Apache helicopters. Hunt deployed once to Iraq and twice to Saudi Arabia, and James served multiple tours in Iraq.

Two women have also joined the veteran ranks, bringing the total number of former female service members in Congress to a record seven first set by the 116th Congress. Rep.-elect Jen Kiggans, R-Va., is a former helicopter pilot who served in the Navy for 10 years and deployed twice to the Persian Gulf. Rep.-elect Anna Paulina Luna, R-Fla., is an Air Force veteran who served as an airfield manager.

Groups working to recruit and elect veterans to public office said the makeup of the 118th Congress is promising. Five more veterans will serve in this Congress compared to the last Congress, making up 18% of the legislature. But representation still falls far short of peaks between 1965 and 1975, when at least 70% of lawmakers had military experience due to World War II and the Korean War.

Since the late 20th century, veteran service in Congress has dropped dramatically, according to the Pew Research Center.

Much of that is due to the end of the draft, said Gabriel Ramos, a Marine Corps veteran who now works for the bipartisan organization New Politics. The group helps veterans run for public office and has supported candidates such as Rep. Seth Moulton, D-Mass., who served in the Marine Corps and completed four tours in Iraq, and Rep. Mikie Sherrill, D-N.J, a former Navy helicopter pilot.

Ramos said 2018 was a turning point for veterans seeking an electoral seat, particularly for female veterans such as Sherrill who ran and won in record numbers. That upward trend continues to hold as the generation that surged into the armed forces following the 9/11 attacks considers their post-military career options, he said.

“This post-9/11 generation of veterans … are going to see that there’s an opportunity for them to really make a difference,” Ramos said. “They see that politics is broken, they see the dysfunction and they compare that with what they see in their communities and where they’re coming from in the military, where it’s really that collective progress mindset. The more that they come out of uniform, they’re going to be saying, ‘Hey, if not me, then who?’”

With Honor Action, an organization that promotes veteran leadership in public service, has connected with nearly 1,500 veterans about running for office since 2017. The group helped about 10% of them organize campaigns, said Rye Barcott, a Marine Corps veteran who served in Iraq and now leads With Honor Action.

Veterans are uniquely suited for public office because of their orientation toward service, commitment to carrying out a mission and experience working with a wide range of people, Barcott said. Those who make it to Capitol Hill often play leading roles in helping Congress oversee the Defense Department and veterans affairs.

Barcott likened serving in office to a hardship tour.

“Mission first is really an essential attribute to being a member of Congress,” Barcott said. “Bringing that type of service mentality is what differentiates a lot of veterans from those members who have worked in other capacities where they didn’t have to put their life on the line or work with Americans from all walks of life.”

That background also comes with challenges. Many veterans are hesitant to build a brand for themselves after years of putting service above self, Barcott said. They often lack the connections to mount a run because they constantly moved around, Ramos said. And, most critically, most do not have the financial resources required for a campaign that now spans a year and a half for a House seat.

“Running an effective campaign is like running a small business,” Barcott said. “You have to put your entire self into it.”

More veterans are showing a willingness to do so with help from organizations and paths blazed by those who have traded in their military uniforms for a seat on a dais, Ramos said. The military is one of the last governmental institutions that is highly regarded among the general public and veterans have shown that their experience connects with a wide swath of the population, he said.

“I think more vets are seeing first-time candidates in races with that military background being able to have success and make a name for themselves,” Ramos said. “The more veterans see an example of folks with that experience having success, the more likely they are to want to run themselves.”