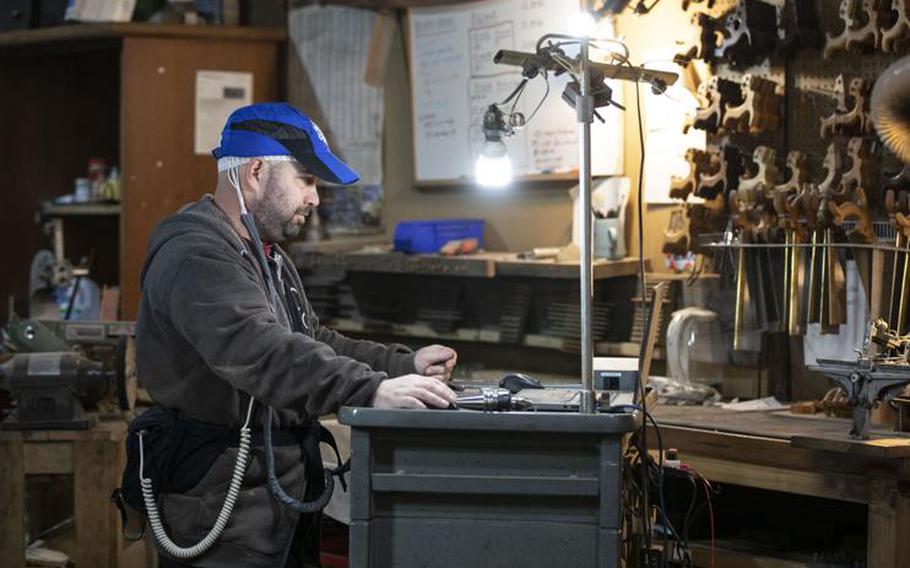 Erik Florip works at his shop in Empire, Michigan. Florip, 37, was exposed to toxic burn pits while he served with the U.S. Marine Corps in Afghanistan and had a glioblastoma the size of a lime removed from his brain in June. Glioblastoma recently was added to a list of conditions that are presumed to have been caused by exposure to burn pits that smoldered continuously at American military bases in the Middle East. (Mike Krebs/Record-Eagle)

Now he adds another title to the list — disabled veteran.

Florip, 37, had a glioblastoma the size of a lime removed from his brain in June. The tumor was caused by exposure to toxic burn pits while he served with the U.S. Marine Corps in Afghanistan.

While the operation removed about 95 percent of the fast-growing tumor, the illness is terminal. Those who are diagnosed may live for a year or so, with about 1 percent surviving for more than 10 years.

Florip doesn't know how much time he has, but none of us do, he says. He wears a device on his head that creates electrical tumor treatment fields meant to disrupt cancer cell division. It is not a cure, but he hopes it will prolong his life, giving him more time with his wife Temple and daughter Ella, 10.

"That's the tough part," Florip said. "I've got a wife and young daughter that you want to be there for, expect to be there for. I just feel like it's slipping away without having any say in it. You wake up in the morning stressed out at 3 o'clock knowing that this is what's happening."

Temple said everything happened so fast.

"Overnight, our entire lives changed and it feels like we're losing things right and left," Temple said. "The future we had planned has been taken from us."

Temple, who managed a yoga studio, also had to give up working to take care of her family.

"It's hard to cope," she said. "I've had to let go of my two jobs because I didn't have the emotional capacity to handle anything."

"I've really just got to cross my fingers and hope they're going to tell me there is some type of new treatment to try out, some new medical breakthrough that comes along."

Glioblastoma recently was added to a list of conditions that are presumed to have been caused by exposure to burn pits that smoldered continuously at American military bases in the Middle East.

More than 20 health conditions were added via the PACT Act, signed into law in August and taking effect Jan. 1, including asthma, chronic bronchitis, emphysema and several types of cancer. The act expands benefits and services for veterans exposed to toxic chemicals from the burn pits. It also adds conditions known to be caused by Agent Orange during the Vietnam War.

Veterans who served during the Gulf War era or post-9/11 no longer have to prove their conditions were caused during their service in order to get medical coverage and disability benefits for them and for their families after they're gone.

"If you served time in certain areas in certain time frames and have this thing pop up, you can assume that's what caused it," Florip said. "That's huge, because otherwise I'd have to figure out a way to prove it, which I'm just a normal person up in Northern Michigan ... It's a pretty big deal for people to not have to do that."

The family gets disability benefits now and, when he's gone, Temple and Ella will continue to receive benefits throughout their lives. Florip said that has given him a measure of peace, knowing they will be taken care of.

The VA is hiring at regional offices and processing and call centers in the United States and Puerto Rico to take care of the new claims.

Roof said that, in addition to helping veterans get the disability benefits they deserve, it lengthens the time they can apply for benefits after their separation date from five years to 10. It also names any neck, head, respiratory and reproductive cancers as presumptive, without specifying what kind of cancer a person must have.

"There are so many younger veterans that have these issues because of their service," Roof said. "It will definitely expand the number of people who qualify for benefits."

After signing up with the U.S. Marine Corps in 2006, Florip headed to boot camp in San Diego, missile training in El Paso, Texas, and 3d Low Altitude Air Defense system training at Camp Pendleton in California.

In 2010, he was deployed to Camp Leatherneck in Afghanistan, where his unit provided security. The unit lived on a small, one-acre section of the base, where they also interacted with the local population as part of a mission to see if they could be persuaded to grow corn instead of poppies that would be made into heroin, the No. 1 export in the country.

That proved to be difficult, he said, because poppies are much more lucrative than corn.

Florip was in Afghanistan for a little over six months, where all the trash from the base, including plastics, huge batteries, old tires and even human waste was disposed of in burn pits.

"Right outside the little base there was just a big hole in the ground and every morning all the trash goes out there," Florip said. "You stoke the fire, dump some diesel fuel on there to get it going again. It would smolder all day and all night ... There's constantly a huge fire going."

The pits were located at bases all over the Middle East, with several of them at the 1,600-acre Camp Leatherneck.

Florip was back home for about five years when he began having terrible headaches. He went to the emergency room where a CAT scan of his brain was done. They saw something, did an MRI and found the tumor.

He went to surgery the next day and the grade 4 glioblastoma — the most serious on a scale of 1 to 4 — was mostly removed and sent to a University of Michigan lab for a biopsy. The tumor was malignant, as most glioblastoma tumors are. It is the most aggressive form of brain cancer, with the tumor growing 'fingers' that reach into other areas of the brain.

After surgery Florip was given seven weeks of radiation. He takes an oral chemotherapy drug and recently began using TTF therapy, which must remain in place on his scalp for at least 75 percent of every day.

"The strangest part is that it doesn't feel like there's a normal anymore. I haven't worked a full day of work since the surgery."

Florip is a talented woodworker who has designed a woodworking hand saw he sells online. He still spends a few hours a day at his shop in Empire, a pole barn heated with a wood stove.

He got into the field when Temple, who is a huge reader, wanted a book shelf.

"I built her a bookshelf and fell in love with woodworking," he said.

The PACT Act is a good thing in many ways, not just for Florip and his family, but for thousands of other veterans and their dependents who now won't have to fight for benefits, he said.

"Somebody will be eventually held accountable for making people sleep next to burning plastic bottles for months on end. Would you do that to your own kids?" he said. "No, nobody would do that.

"It's nice to see something has passed and somebody is taking responsibility for that."