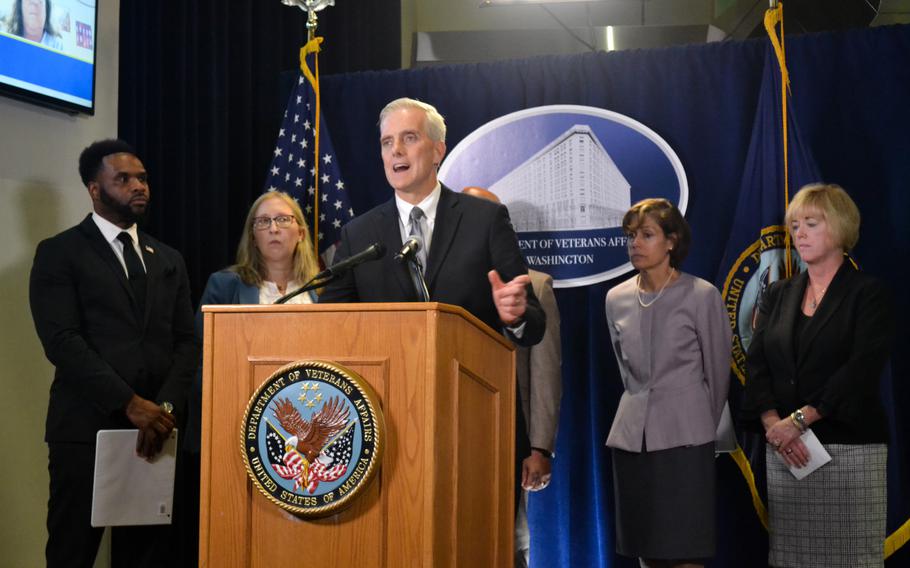 Department of Veterans Affairs Secretary Denis McDonough at the agency’s monthly news conference on Oct. 25, 2022. McDonough said the VA received more than 100,000 claims under the PACT Act, and the agency will begin toxic exposure screenings for all veterans enrolled in the VA system. (Sara Samora/Stars and Stripes)

WASHINGTON — The Department of Veterans Affairs has received nearly 113,000 claims under a new law that expands eligibility for health care and benefits for veterans exposed to burn pits and other toxins, agency officials said Wednesday.

The VA said 112,949 claims by veterans have been submitted as of Oct. 22 under The Sergeant First Class Heath Robinson Honoring Our Promise to Address Comprehensive Toxics Act of 2022, or PACT Act, since President Joe Biden signed it into law on Aug. 10.

More so, the agency is urging more veterans to submit claims quickly. Joshua Jacobs, the VA’s senior adviser for policy and acting Veterans Benefits Administration undersecretary, said veterans should submit their claims before August so their benefits begin from the day the PACT Act became law and they will receive back pay.

“We want to make sure veterans know about it and take full advantage of the benefits that they've earned,” he said.

After Aug. 10, 2023, the PACT Act service-connection benefits will begin when they are filed.

The PACT Act seeks to provide an easier path to health care and benefits for veterans who served near open-air burn pits, which were used throughout the 1990s and the post-9/11 wars to burn garbage, jet fuel and other materials. Veterans diagnosed with cancer, respiratory issues and lung disease at young ages have blamed exposure to the toxic fumes from these pits, but the VA contended for years that there wasn’t sufficient evidence to support their claims.

Additionally, the law expands health care eligibility to post-9/11 combat veterans and adds 23 conditions related to burn pits and other toxic exposures to the VA’s list of service presumptions.

The new law also improves the VA’s workforce and its claims processing to speed up efforts to meet the needs of veterans and establish 31 new VA health care facilities in 19 states.

In August, the VA declared all 23 health conditions outlined in the PACT Act “presumptive” from the date the bill was signed, reducing the burden on veterans or their survivors to prove that certain diseases were caused by service-related exposure to toxins and burn pits.

Jacobs said the decision should deliver more benefits to veterans faster, rather than a phased-in approach.

“It would make it harder for us to do the work that we need to for other veterans and it would be, most importantly, very frustrating for veterans who had to wait,” he said.

VA Secretary Denis McDonough said Tuesday at the agency’s monthly news conference that it will begin toxic screenings on Nov. 8 for all veterans now enrolled in the VA system. The screening will consist of a questionnaire that would take five minutes.

McDonough also said more than 15,000 veterans have been screened for toxic exposure at seven different VA sites so far.

The law is named for Sgt. 1st Class Heath Robinson, who was diagnosed with a rare autoimmune disorder and lung cancer after serving with the Army National Guard in Kosovo and Iraq, where he experienced prolonged exposure to burn pits. He died in 2020.

“We want them to know what's in the law, and we want them to know we're excited for them to come in, get the benefits that they've earned, get the health care that they earned, and ultimately feel a sense of pride that we as a country are finally able to take care of them and recognize them for the service,” Jacobs said.