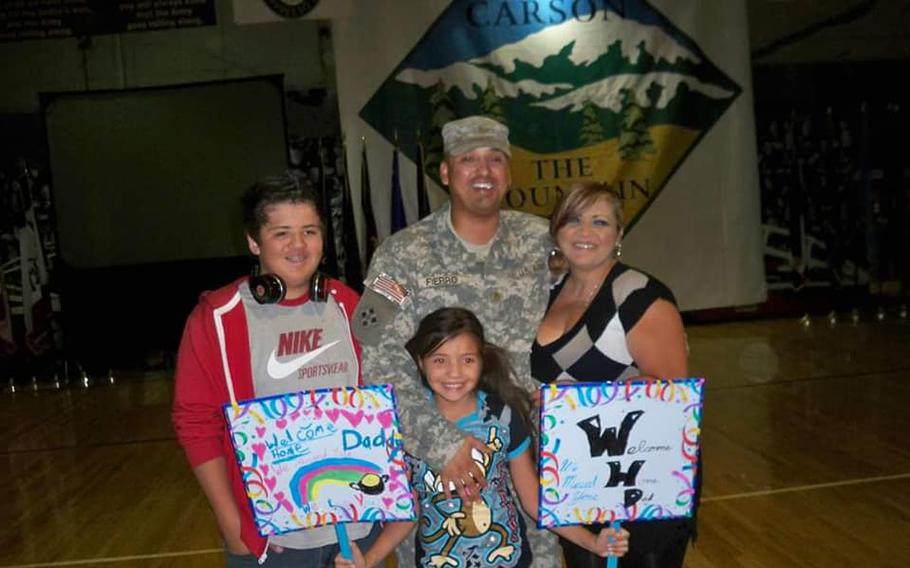 Army veteran Richard Fierro is shown with his family in this undated picture. Fierro was one of two men who rushed to confront and subdue the gunman at the Club Q shooting in Colorado Springs on Saturday, Nov. 19, 2022. (Facebook)

For his bravery, selflessness and quick thinking in halting a mass shooting that killed five people and injured dozens more, Richard Fierro was awarded the credit union's first-ever Community Advocate Award at the Atrevida Beer Co., the bar he owns with his wife, Jessica.

"You did the most courageous thing anyone could imagine," said Matt Gendron, Ent's chief engagement officer, before giving Fierro the award. "This has inspired us."

Colorado Gov. Jared Polis and Colorado Springs Mayor John Suthers were among the standing-room-only crowd of friends, patrons and well-wishers at the tavern.

"Rich, we are so glad that you and your family were there that night," said Polis, who visited the Club Q memorial earlier that afternoon. "There are dozens of parents, siblings and spouses that have their loved one with them … because you were there."

Channing Law, a friend of Fierro's who was injured in the attack at the nightclub, was present at the brief ceremony. Law's wife, Joanna, was shot that night and is still recovering at the hospital.

"(Channing and Joanna) have been here since day one," Fierro said. "This is our Colorado family, and when I say that everybody in that room was my family, that's what it meant."

Raymond Green Vance, the boyfriend of Fierro's daughter Kassandra, was one of the five people killed in the shooting. Kassandra, who also was injured, was released from the hospital on Tuesday, Fierro said.

"She just got out of surgery this morning," Fierro said. "She's at home, recovering."

Fierro said he was "overwhelmed" at the generosity of the award, but that the family is still in mourning, and will be for a while.

"I'm still heartbroken. We've still got some hard things to do this week," he said.

A private funeral service for Vance will be held Saturday at 4:30 p.m. Two public viewings will be held on Thursday and Friday.

Despite the fact that his actions potentially saved dozens of lives, Fierro was uncomfortable with being hailed as a hero.

"Thomas (James, the Navy petty officer who assisted Fierro) and I did something that we felt like we had to do, I guess," he said. "But everybody in that room was a hero. Everybody got put into combat, and nobody asked for it."

Like many small businesses, Atrevida Beer is still struggling to rebound from the COVID-19 pandemic, but Fierro said he wasn't yet sure what the family would do with the cash award.