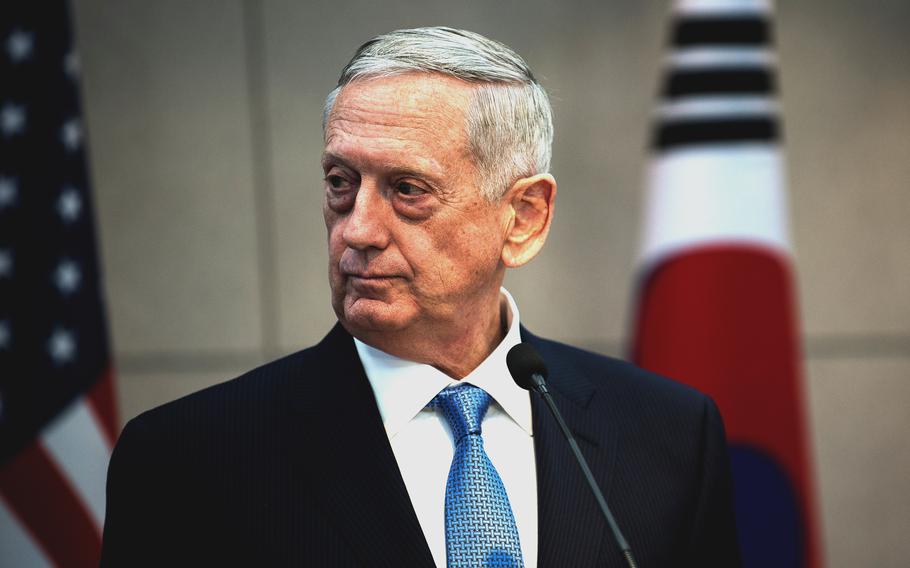 James Mattis, at the time the U.S. Defense Secretary, at a press conference at the Ministry of National Defense in Seoul, South Korea, on Feb. 2, 2017. (Amber I. Smith/U.S. Army)

Americans working for the federal government who also receive money — or emoluments — from foreign powers became an issue for the first time in years under President Donald Trump when he and some in his administration were accused of violating the rules. Retired military personnel are subject to the same rules — though these former troops receive little scrutiny. The Washington Post wanted to know: To what extent are they seeking work from foreign governments?

The Post sued the armed forces and the State Department to obtain the records on foreign jobs sought by military personnel, including the type of work, compensation and countries involved. So far, The Post has obtained more than 4,000 pages of documents, including case files for about 450 retired soldiers, sailors, airmen and Marines.

The government had resisted releasing the records under the Freedom of Information Act, arguing that disclosure was not in the public interest and violated the privacy of military personnel. After a two-year legal battle, U.S. District Judge Amit P. Mehta ruled in September that the government's arguments were "unconvincing."

"The public has a right to know if high-ranking military leaders are taking advantage of their stations — or might be perceived to be doing so — to create employment opportunities with foreign governments in retirement," Mehta wrote.

Here are key takeaways from what those records reveal:

More than 500 retired U.S. military personnel — including scores of generals and admirals — have taken jobs as contractors and consultants for foreign governments since 2015, cashing in on their military expertise and political clout.

Most have worked as civilian contractors for Saudi Arabia, the United Arab Emirates and other Persian Gulf monarchies, playing a critical, though largely invisible, role in upgrading their militaries.

Most are hired by countries known for human rights abuses, political repression

Among those who have worked as paid military advisers to Saudi Arabia since Khashoggi's slaying are a former White House national security adviser, a former director of the National Security Agency and a former commander of U.S. troops in Afghanistan.

Retired Army Gen. Keith Alexander, director of the NSA during the George W. Bush and Obama administrations, received approval from the State Department to work for the Saudis two months after Khashoggi's assassination. The Saudis hired Alexander to help develop a new institution: the Prince Mohammed bin Salman College of Cyber Security. Alexander's consulting firm worked for the Saudis until 2020.

Americans' work for the Saudis expanded after Khashoggi's assassination

In a Post interview, Jones said he was "very shocked and surprised at what evidently happened" to Khashoggi. But he said the U.S. government encouraged him to keep working for the Saudis. "I don't know what the alternative would have been if we pulled away. I was worried that [the Saudis] would possibly drift off to other relationships with the Chinese and the Russians."

The UAE is the most popular foreign job market

Over the past seven years, 280 retired U.S. service members have worked as military contractors and consultants for the United Arab Emirates, more than for any other country by far.

The Emiratis have relied on U.S. military contractors and advisers to build what many experts regard as the strongest military in the Arab world. But the UAE has used its armed forces to intervene in civil wars in Yemen and Libya, worsening the humanitarian crises in both countries.

Before serving Trump, Mattis worked for the UAE

Retired Marine Gen. Jim Mattis served as a military adviser to the UAE before becoming secretary of defense for Trump.

A spokesman for Mattis said he advised the UAE on "the operational, tactical, informational and ethical aspects" of military operations, but accepted no compensation for his work.

Shortly after he resigned as Pentagon chief, Mattis applied for federal permission to work with the Emiratis again and gave a speech in Abu Dhabi. Documents show he was supposed to receive an "honorarium" from the UAE, but a Mattis spokesman said he accepted only reimbursement for travel expenses.

Former admirals are consulting with Australia on top-secret technology

Former U.S. Navy leaders are working as paid, confidential advisers to the government of Australia to help it acquire top-secret nuclear submarine technology from the United States and Britain.

Australia is now trying to finalize a deal with the United States and Britain to build a fleet of nuclear-powered submarines that could cost more than $74 billion. The outcome will have global ramifications and could alter the military balance of power in Asia among the United States, its allies and China.

Since 2015, retired U.S. admirals and other former senior U.S. Navy leaders have received consulting deals from the Australian government worth more than $10 million combined.

Requests to work for foreign governments are largely rubber-stamped

Retired troops seeking foreign work must first obtain approval from their branch of the armed forces and the State Department. The Post found these requests are largely rubber-stamped: Of more than 500 submitted since 2015, about 95 percent were granted.

The Post also identified scores of retirees on LinkedIn who say they have taken military contracting jobs in the Persian Gulf, but for whom there is no record of federal approval. There is no criminal penalty for violating the law. Enforcement is almost nonexistent.

The Defense Department can withhold retirement pay from those who ignore the rules. But the Defense Finance and Accounting Service, which administers military payrolls, has docked the pensions of "fewer than five" people, according to Steve Burghardt, an agency spokesman. He declined to identify the individuals, specify the time frame or provide other details, citing privacy concerns.