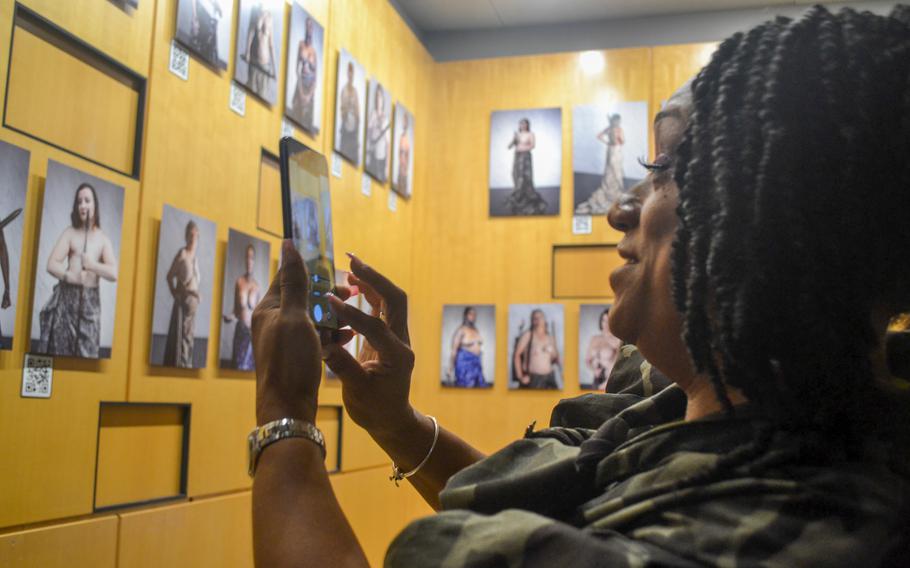 Army veteran Tamekiah Aguirre takes a photo of her portrait at the Military Women’s Memorial at Arlington National Cemetery, Va. Aguirre had her portrait taken in July. Aguirre had followed photographer Charise Isis’ Grace Project for a couple of years before her breast cancer diagnosis in September 2020. As part of The Athena Division, a military chapter of the Grace Project, female veterans impacted by breast cancer were photographed. (Sara Samora/Stars and Stripes)

Kaufman provided the impetus for Isis when she told her of a 2009 Defense Department study that found female active-duty service members have a 20% to 40% higher incidence rate of breast cancer than the public.

“She said to me, … ‘I have friends who are dying, and I want to unearth this information so that women serving in the military can advocate for themselves,’” Isis said.

The photographer decided to expand her Grace Project, which features portraits of women who have had mastectomies or lumpectomies due to breast cancer, to include a chapter on military and veteran women.

Some of the resulting photos are now on display at the Military Women's Memorial at Arlington National Cemetery, Va., and Isis said she hopes it will raise awareness of the disease. October is Breast Cancer Awareness Month, and the exhibit will be displayed until Sunday.

Kaufman also helped Isis gather female veterans to participate in the project. In 2015, Isis took the first 20 portraits of The Athena Division, named after the Greek goddess of war, which are exhibited at the memorial and feature 50 photographs. Some of the portraits were also taken at the Military Women's Memorial.

"It was a moving thing for these women because breast cancer is a hidden disease underneath your clothes. You're not walking around with your scars," Isis said. "But breast cancer, for the most part, is an amputation of sorts. These women aren't being recognized for their scars, but coming into [Military Women's Memorial], removing their shirts and being seen for the scars that are underneath their clothing, and then also being recognized for their service [at the memorial]."

Kaufman died in May 2020 after battling breast cancer. 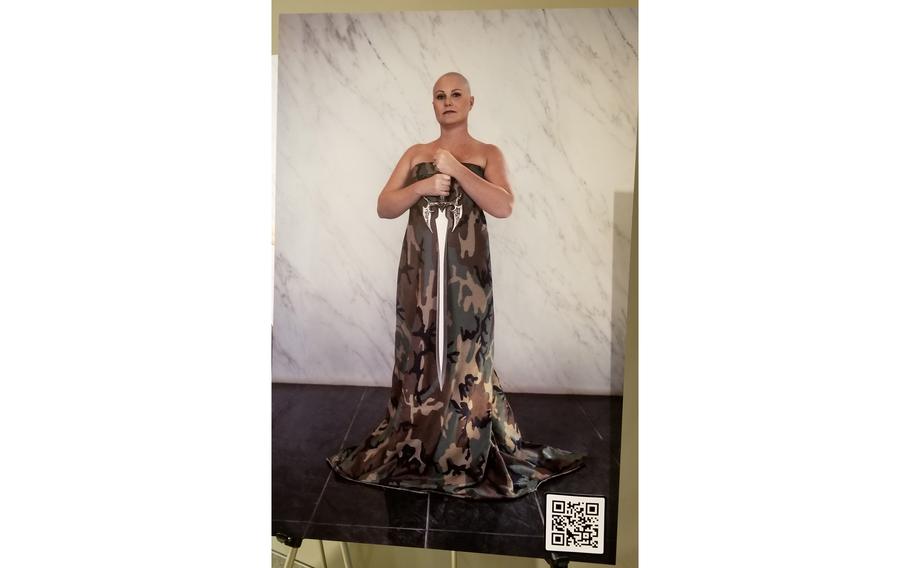 Marine veteran Kate Hendricks Thomas was one of the five new portraits unveiled Saturday, Oct. 1, 2022, at the Military Women’s Memorial at Arlington National Cemetery, Va., as part of The Athena Division, a military chapter of photographer Charise Isis’ Grace Project. The portraits are of female veterans impacted by breast cancer. (Sara Samora/Stars and Stripes)

The National Breast Cancer Foundation Inc., a nonprofit focused on helping women impacted by breast cancer, reported, on average, a woman is diagnosed with breast cancer every two minutes in the United States. Moreover, the breast cancer death rates are 40% higher among Black women than white women.

Air Force veteran Sheila Johnson has a portrait featured in The Athena Division. She was still on active duty when she was diagnosed with stage four breast cancer on Dec. 2, 2009. Johnson underwent a mastectomy with reconstruction surgery.

Though Johnson's mother died from breast cancer a few years ago, she said she didn't know much about the disease.

"I wish I would have known about genetic testing," Johnson said. "These are things [in] the military that we need to talk about, that [we] need to have open conversations about."

Almost 13 years later, she's still battling the disease, but she credits research for keeping her alive. She also advocates for getting more money for research.

Army veteran Tamekiah Aguirre had her portrait taken in July. Aguirre had followed Isis' Grace Project for a couple of years before her breast cancer diagnosis in September 2020.

She had a small lump in her breast. Aguirre had a lumpectomy, and she said her doctor was able to catch all of it. She then received three and a half weeks of radiation.

When Isis took Aguirre's photo in July, Aguirre said Isis brought comfort and ease and made her forget about her scars.

"When she's photographing you, she tells you to think about everything you went through in this journey," Aguirre said. "But it's a way that she has you embrace it, not the negative side of it, it's the positive side. You take those emotions and you gravitate to those emotions, but in a way to say in that moment, 'I'm here, I'm alive. I'm thriving’.”

On Saturday, five additional portraits were unveiled, one of which was of Kate Hendricks Thomas, a Marine veteran who advocated for better health care for veterans exposed to burn pit toxins.

Thomas fought for years to prove her cancer resulted from her exposure to toxic burn pits before the VA recognized the link. At the same time, she advocated for the process to change so other veterans didn't face the same challenges. Thomas died in April at the age of 42.

In June, President Joe Biden signed into law The Dr. Kate Hendricks Thomas Supporting Expanded Review for Veterans In Combat Environments Act, also known as the Dr. Kate Hendricks Thomas SERVICE Act. The new law extends access to mammograms for female veterans who served in areas with burn pits or other toxic exposures, regardless of their age, symptoms or family history.

"[Kaufman] would be so proud that this is happening [at Military Women's Memorial]," Isis said. "I really hope that these photographs, and this message, get in front of the right eyes so that there's more funding for research for metastatic breast cancer. … We need to do better [for] our women veterans who are serving and getting breast cancer. They need to be looked after."

Female veterans interested in participating in The Athena Division can apply to be photographed at http://the-grace-project.org/.