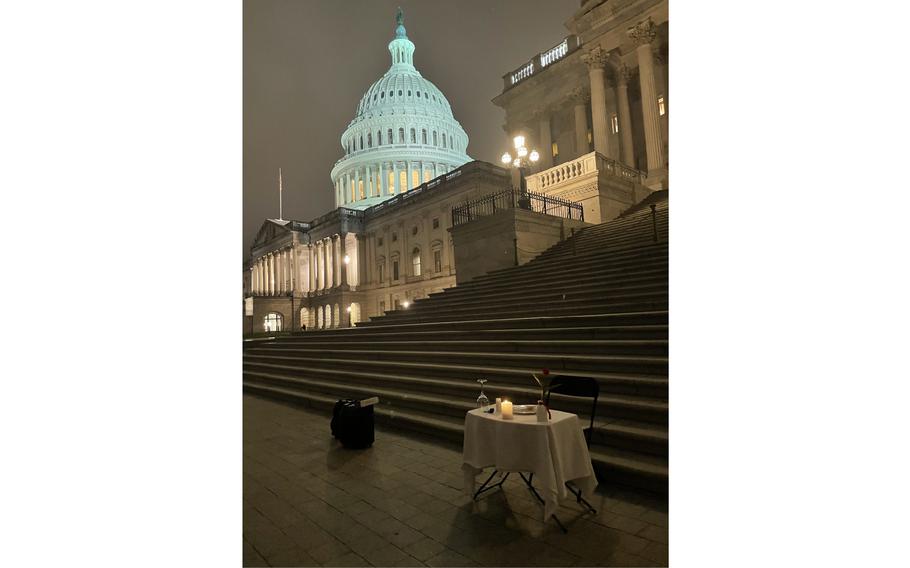 James Powers still recoils when he thinks about the smell that hung over his base while serving in Iraq — a putrid mix of burning plastic and human waste.

The former soldier recalls days when the smoke from the burn pits made it too hazardous for helicopters to fly overhead. While some of his infantrymen never made it out of the war zone, others who did later fell ill from the toxic fumes they inhaled daily, he said.

Powers now fears a similar fate: “It’s just a matter of time until it happens to me,” he told The Washington Post.

He was among the veterans, military family members and advocates staged on the Capitol steps for the fourth night on Sunday, pledging to remain until Congress passes a bill that covers health care for those exposed to toxins while serving in uniform. Earlier that day, the head of the Department of Veterans Affairs warned that a new Republican proposal could leave the agency “rationing” veterans’ health care. GOP lawmakers blocked the aid from passing last week in what comedian Jon Stewart, a longtime veterans advocate, blasted as “a disgrace.”

“We fought for this country freely, and we expect now that people will fight for us and fight for our basic health care,” said Samantha Turner, an Army veteran who served near burn pits in Kuwait. Turner, who has sleep apnea, now uses a machine to breathe at night.

“We’re not political pawns,” she added.

Though exposure to burn pits is known to cause cancers, sleep apnea and other respiratory, cardiovascular and neurological conditions, the Senate Veterans’ Affairs Committee’s top Republican said about 70% of all disability claims related to the toxins are denied because of service members’ inability to prove a link between their conditions and the hazardous substances. For years, activists had been fighting for an expansion in veterans’ health-care coverage that would remove that burden-of-proof requirement — resulting in a bill known as the Pact Act.

The legislation was welcomed by veterans and their loved ones. And it was poised to pass after sailing through the Senate by an 84-to-14 vote in June.

But when the bill was sent back to the Senate for a second vote on Thursday after the House made adjustments, 25 Republicans reversed course. The bill fell short of the required 60 votes to overcome a filibuster, with a final 55-to-42 tally — a situation Turner called “a slap in the face.”

The reversal was widely decried by Democrats, veterans and advocates. Some accused the GOP of retaliating against the go-ahead Democrats received to pass climate change legislation without Republican votes.

But Sen. Patrick Toomey, R-Pa., who voted against the bill twice and has proposed an amendment, said the reversals hinged on an accounting provision — saying that moving certain benefits spending from VA’s discretionary budget to its mandatory budget would “create room in future budgets for $400 billion of totally unrelated, extraneous spending on other matters,” he said during a Sunday interview with CNN.

Department of Veterans Affairs Secretary Denis McDonough argued that Toomey’s proposed amendment could create a scenario in which Congress changes or caps the amount the department spends on veterans’ health care annually. He also said funds would be terminated after a decade.

“I can’t, in good conscience, do that, because the outcome of that will be rationing of care for vets, which is something I just can’t sign on,” McDonough told CNN’s Jake Tapper on Sunday.

Toomey fired back, calling McDonough “either misinformed about my proposed amendment or willfully dishonest.”

Another procedural vote on the bill is scheduled for Monday. Turner, who has been on the Capitol steps for three days, compared the situation to watching “political poker” while some veterans suffer.

Near her spot on the steps, a “missing man table” was illuminated by the moonlight. It was set with a plate, a candle and a vase tied with a red ribbon.

“It commemorates all those of us who didn’t make it,” Turner said, “whether that’s in combat or in its aftermath.”

With her outside the Capitol, she said, are some veterans who are battling terminal cancers. They’ve “chosen to literally spend their last days of life sitting here,” Turner said through tears.

Some had made long trips to plead for change. Dan Pierce, a 29-year-old military family member, traveled from South Carolina after witnessing his uncle “having to fight to get every single treatment he needed after serving.”

“I’ve lost too many people to this,” Pierce added. “We need to give veterans what they need and deserve. Their lives depend on it.”

Around him, a dozen people sat in a circle — some stationed there for hours. Local support had poured in, including cases of water bottles and food. Chef José Andrés had been sending warm meals twice a day. There was a FaceTime call with President Joe Biden, whose son died after serving near burn pits. But the situation still felt “devastating” said Matthew Schwartzman, the director of legislation and military policy for the Reserve Organization of America.

“What it really comes down to is, this bill should’ve been signed into law already,” he said. “No one should have to be here to see this bill through to the end.”