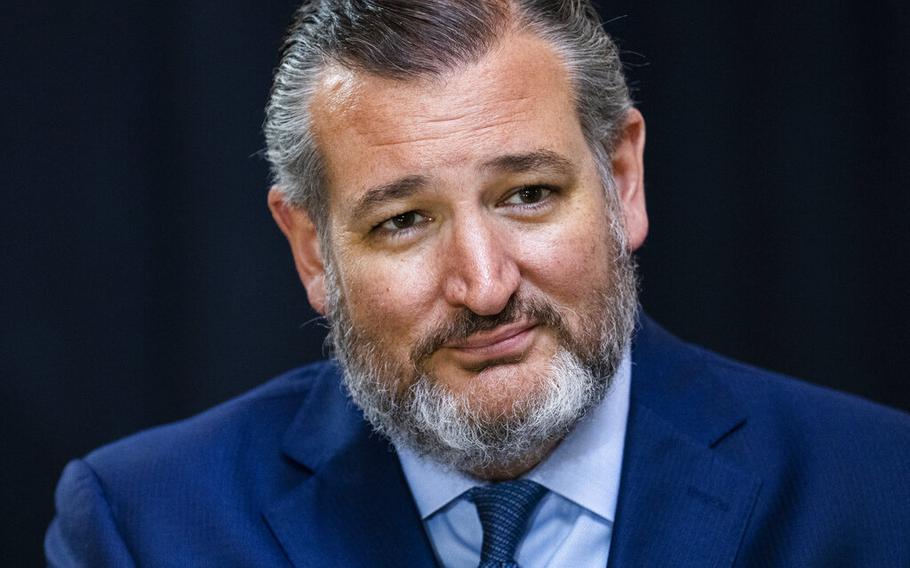 WASHINGTON (Tribune News Service) — As the Senate voted this week on a bill that would help veterans sickened by toxic fumes from burn pits in Iraq and Afghanistan, Sen. Ted Cruz, R-Texas, was standing near the front of the room chatting with colleagues.

When Sen. Steve Daines, R-Mont., cast his "no" vote, Cruz rewarded the Montana Republican with a fist bump.

A video clip of that moment began circulating on social media, with Democrats and advocates of the bill slamming the celebratory gesture.

"The most despicable part of this whole thing is watching on the Senate floor Ted Cruz fist-bumping and then patting each other on the back when they blocked this bill," comedian and activist Jon Stewart said during an appearance on MSNBC. "Josh Hawley and Pat Toomey celebrating their victory over veterans with cancer."

Cruz's office provided a written statement that he is a "strong supporter" of both the legislation and the nation's veterans but took issue with a provision in the bill he says could allow Democrats to spend another $400 billion on programs not related to veterans.

"The Senator and his Republican colleagues are working to advance the bill while removing that provision," according to the statement.

Stewart noted that Cruz, along with Sen. John Cornyn, R-Texas, and many other Republicans previously voted for the bill when it was approved 84-14 but then reversed course and blocked it this week.

The only thing that changed from then to now, he said, was a minor technical correction in the bill that necessitated another Senate vote.

Sen. Pat Toomey, R-Pa., has repeatedly spoken out about the $400 billion issue, which deals with congressional budget procedures and whether funding is considered "mandatory" or "discretionary."

Toomey says the change from one category to another opens the door to a massive "slush fund," for unrelated spending — a charge proponents of the bill say is nonsense.

Some bill proponents have suggested Republicans were motivated to block the bill out of spite after Senate Majority Leader Chuck Schumer, D-N.Y., announced an agreement with Sen. Joe Manchin, D-W.Va., to move a package of tax, climate and health care provisions through the budget reconciliation process that allows them to bypass Republicans.

But Republicans denied that and instead accused Schumer of promising Toomey a vote on an amendment to address his budget issue, but then reneging.

A vote on both the Toomey amendment and the underlying bill are expected Monday and Republicans said the measure is likely to pass then.

In the meantime, however, those supporting the bill are frustrated at the holdup. The bill would help veterans from recent wars — as well as those going back to Vietnam — to access benefits. Veterans also have fought for assistance through lawsuits.

Rep. Joaquin Castro, D-Texas, met Friday with advocates who were holding placards on the steps of the Senate, including Natalie Thomas, the daughter of retired Army Sgt. 1st Class Kevin E. Thomas of Garland, Texas.

Her father said in a phone interview that he was around burn pits often during his deployments to Kuwait and Iraq. The soldiers were told to throw all manner of garbage into the pits, including batteries, tires and used oil.

"It was horrid," he said of the resulting fumes. "It was like a fog … it was nasty and disgusting."

He said he returned from his deployments hacking up blood and still has health issues today.

Castro said he's been working with Texas advocates behind the bill for years and it's remarkable they have been able to bring the legislation to this point.

He said it's "shameful" to see senators blocking the bill this week and urged the Senate to pass it soon.

"There's people in the hospital right now because of their exposure to burn pits," Castro said. "They're at doctors' offices. They need the benefits that this legislation is going to provide."