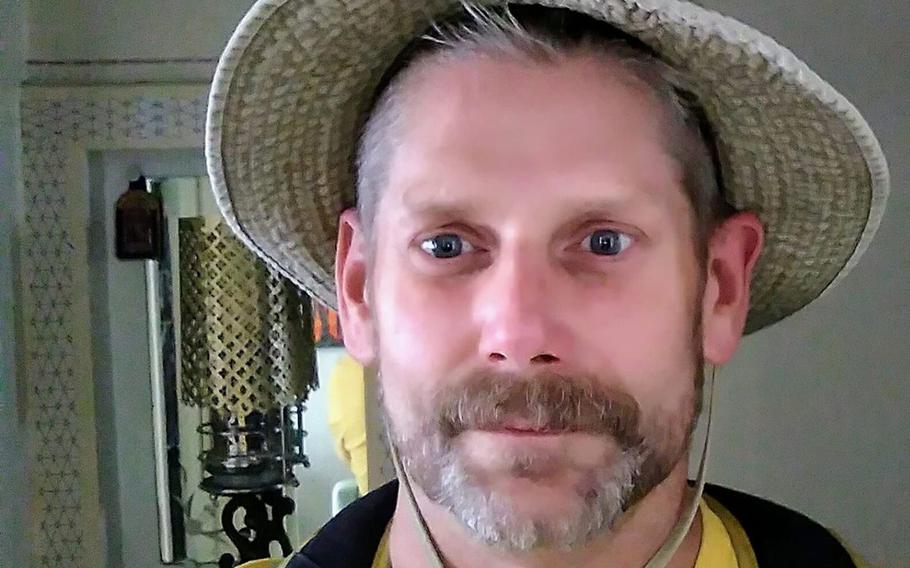 Stephan Steffanides, who is nonbinary and lives in San Francisco, now receives benefits through a VA waiver, but their discharge papers still consider their service “other than honorable.” (Family photo)

WASHINGTON — Nearly a year after the Department of Veterans Affairs promised to restore benefits to some former members of the military who were forced out for being gay, a nonprofit legal group that represents veterans says VA has refused to explain what its new guidance entails — or whether it was implemented.

The National Veterans Legal Services Program (NVLSP) filed a complaint in federal court late last month, alleging that VA has not responded to requests to release what the department called “newly-issued guidance.”

“There was all this attention with the announcement, then we started asking around, and no one had a copy of the policy,” said Renee Burbank, the nonprofit’s director of litigation. “What does it actually say? What does it actually change or do? For all we know, it could be perfect. It could be great. But we don’t know unless we see it.”

Since Congress first banned sodomy under the 1916 Articles of War, more than 100,000 people have been pushed out of the military because of their sexuality, including an estimated 14,000 under President Bill Clinton’s policy known as “don’t ask, don’t tell.” Because many of those were booted from the military with “less than honorable” or “other than honorable” discharges, thousands of people ousted under “don’t ask, don’t tell” do not have benefits, including access to health care, home loans and educational support through VA.

Last fall, on the 10th anniversary of the repeal of “don’t ask, don’t tell,” VA spokeswoman Kayla Williams announced in a blog post that the department planned to issue new guidance allowing VA adjudicators to possibly grant benefits to service members who were discharged based on homosexual conduct, gender identity or HIV status. Williams said the new guidance would also direct adjudicators to consider changing the discharge status for veterans who were kicked out because of their sexuality.

Veterans groups celebrated the announcement. But in the 10 months since, Burbank said, officials at VA have not explained how it will decide who will receive the benefits. The NVLSP filed a public records request in April to review the guidance, and VA officials acknowledged receipt of the request, but they have not fulfilled it, the complaint alleges. (Officials at VA did not respond to multiple requests from The Washington Post for comment.)

Without a written version of the guidance, Burbank said, many veterans appear to remain ineligible for benefits. A VA regulation, for example, still states that if a servicemember was separated from the military due to “homosexual acts involving aggravating circumstances or affecting the performance of duty,” they are barred from most VA benefits, with no corresponding provision for heterosexual acts.

Many others, including Navy veteran Stephan Steffanides, are still struggling to upgrade their discharges.

When Steffanides, who is nonbinary, joined the Navy in 1987, they intended to spend the rest of their life in the military. For a hundred years, they said, all their male relatives had served, and Steffanides grew up hoping to emulate them.

The Navy assigned Steffanides to the USS Abraham Lincoln, a ship that docked in Norfolk and Newport News, and Steffanides said they immediately felt happy. They had always longed to sail. But a few years later, Naval superiors found a magazine in Steffanides’s locker. The Navy began investigating, and on Christmas Eve 1991, the Navy kicked Steffanides out for “engaging in or attempting to engage in or soliciting another to engage in a homosexual act.”

The Navy issued Steffanides an “other than honorable” discharge.

“I was completely ashamed,” Steffanides said. “It completely destroyed my relationship with my family.”

Steffanides didn’t receive any benefits or help from VA. They didn’t know how to find other work, either, because at the time, homosexuality was considered a “crime against nature” in Virginia. (Though the U.S. Supreme Court decided in 2003, via Lawrence v. Texas, that anti-sodomy laws were unconstitutional, Virginia’s regulation remained on the books until 2014, when the legislature removed it.) Because Steffanides’s discharge papers labeled them a homosexual, they were afraid to put their military experience on a résumé.

“I felt like I had been branded as a shameful, unhonorable person,” Steffanides said.

That shame was so debilitating, Steffanides said, that they turned to alcohol, then meth. They lived on the streets “behind a trash can” in Los Angeles for 24 years, and did not receive any benefits or mental health help from VA. Eventually, in 2016, Swords to Plowshares, a San Francisco nonprofit that helps homeless, low-income and at-risk veterans, found Steffanides on the streets.

“I could barely face them,” Steffanides said. “But they were so kind to me, and they treated me with respect, and they thanked me for my service, which was something nobody had ever done. It made all the difference in the world. It was like the ice started to melt.”

The nonprofit gave Steffanides an attorney and helped them apply for substance-abuse treatment and disability benefits. After three years, VA granted Steffanides a waiver to receive benefits, but Steffanides still hasn’t been able to upgrade their discharge.

Last fall, when VA published its blog post, Steffanides felt a renewed hope, they said. That same week, President Joe Biden called “don’t ask, don’t tell” a “great injustice” and called on his colleagues to fight for “full equality” for LGBTQ veterans. Steffanides believed the two announcements meant they might soon be able to have their discharge upgraded.

“I had had such a hard time with VA, and I thought, ‘This is going to make it so much easier,’ “ Steffanides said. “We’re going to have something that says, ‘We are so glad you decided to serve your country as a member of the LGBTQ community, ​​and we embrace that, and we’re happy to have your service. We made a mistake, and this is how we’re going to correct it.’ But it was nothing.”

Steffanides now documents other LGBTQ veterans’ stories through an oral history project. They also frequent American Legion Post 448, a group whose members are largely LGBTQ, and run “Do Ask! Do Tell!,” a Sword to Plowshares support program for LGBTQ veterans. Many of the veterans in those groups still lack benefits, Steffanides said, despite last year’s VA announcement.

Burbank, the litigator with the NVLSP, said she hopes to receive a response from VA this month.

“The blog post sort of indicated that this is reemphasizing what’s already in the law, and also they’re adding some procedures, but we don’t know,” Burbank said. “And we haven’t seen this work out. We’re not aware of how this guidance is affecting cases that are being adjudicated right now.”

Steffanides will continue to receive benefits, even without the discharge upgrade, but the words “other than honorable” haunt them. It’s on their military paperwork, and some of their family members died still believing that Steffanides’s service was dishonorable.

“For someone who loves serving their country, to be told you’re dishonorable . . .” they said, trailing off. “The Marines have an expression, ‘Death before dishonor.’ It’s not only true for the Marines. That’s how all people in the service feel. They would rather be dead than be without honor.”