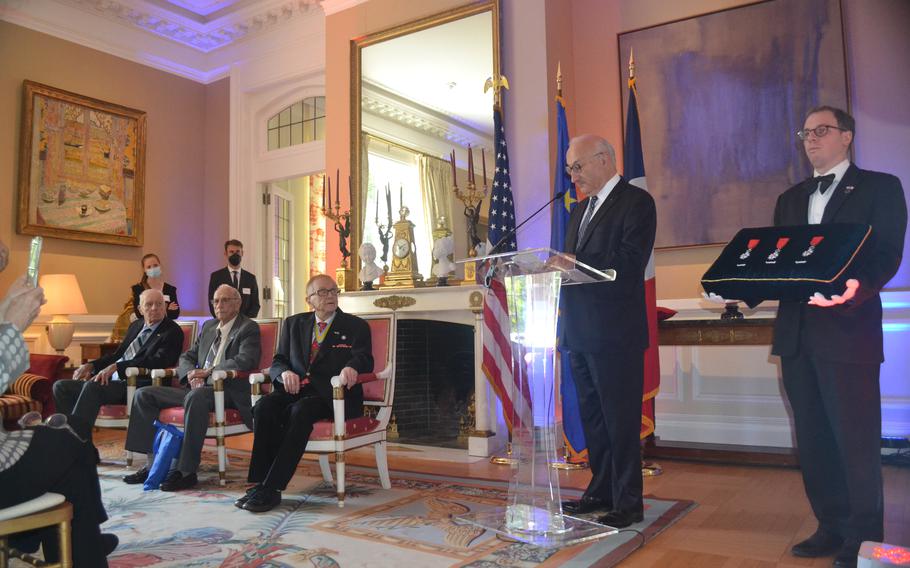 WASHINGTON — Four American veterans who served in the Army during World War II and fought in Europe were recently awarded France’s highest honor for their service.

Benjamin Portaro, 101, and J. David Bailey, 100, fought in the Battle of the Bulge. Ernest Marvel, 98, helped liberate the Dachau concentration camp in Germany. Leslie Simmler, 97, took part in the attack on the Parroy Forest in France.

“We're all 96 or 97, or so forth,” Bailey said. “But we have to keep the history of World War II prevalent. We saved the world from fascism. The reason I get involved and do a lot of work in promoting the veterans issues is because to keep the story alive of that war.”

Bailey, Simmler and Marvel were at the French Embassy in Washington, D.C., on Wednesday to receive that nation’s Legion of Honor for their service during the war. Portaro was unable to attend the ceremony.

French Ambassador Philippe Etienne said the award was created in 1802 to honor the people who displayed special merits and courage in the military and the civilian domains.

“So it is more than normal that we express our gratitude to the American soldiers who came to liberate France in World War II, and we have been doing this for years,” he said. “We are still really very happy that we could, we can still have some veterans [who] are 98, 99, 100 years, who are still there, and we can also express to them our gratitude for having liberated friends, for having risked their lives. There was a great sacrifice.”

Bailey, who was a corporal, said when he joined the Army in November 1942, he wanted to be in the infantry.

“I wasn't a Boy Scout or anything like that,” he said. “But you will find that the best soldiers are not the big muscular type, but the little runts like me, who have a little bit of strength, and perseverance, and so forth.”

Marvel said he still suffers with post-traumatic stress from his time in service. His unit took part in the liberation of the Dachau concentration camp in April, 1945. Marvel said they discovered box cars on railroad tracks near the camp. When they opened, they discovered the box cars were filled with dead bodies.

His unit attacked and captured the Parroy Forest in France. Simmler was wounded in the battle.

Wendy Sherman, the U.S. deputy secretary of state, attended the ceremony to honor the veterans. She said the event was important to her because her father served in the Marine Corps during World War II and her father-in-law was a medic who fought in France.

“And so to have France honor these three gentlemen who fought as Americans, for the freedom and liberty of France, and for the world in World War II, is incredibly meaningful,” Sherman said.