Confidence builds in construction of an official veterans cemetery in Orange County, Calif. 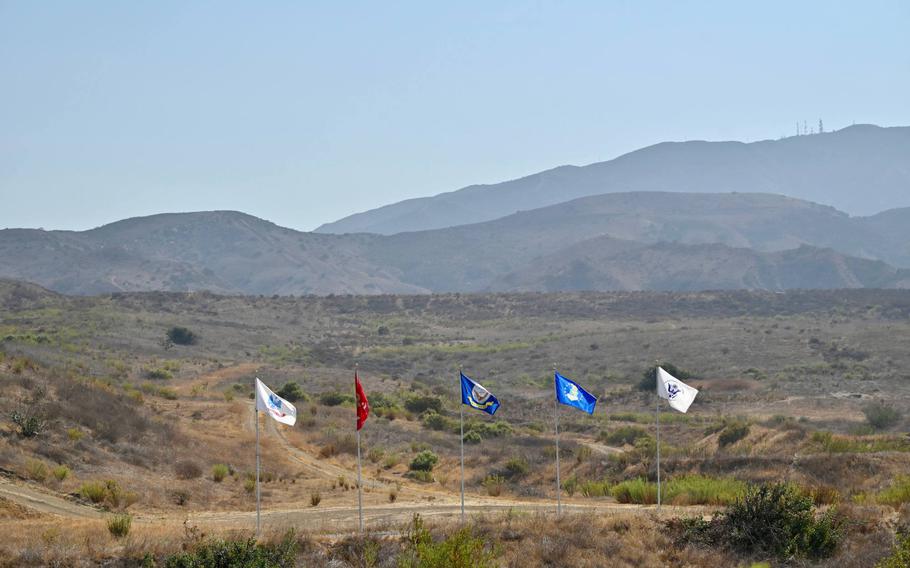 Proposed site for a new public cemetery and veterans cemetery southeast of the intersection of The 91 Freeway and The 241 Toll Road in Anaheim, Calif. ( Jeff Gritchen, Orange County Register, SCNG/TNS)

(Tribune News Service) — Recent progress in the California Legislature and by the Orange County Board of Supervisors suggests the opening of a state-run veterans cemetery in Anaheim Hills could happen within the next two years, multiple officials said.

Supervisor Doug Chaffee, chairman of the county Board of Supervisors, expressed his confidence in the estimate, saying: “We’ve done more in this year alone than the previous 12 years in finally bringing a veterans cemetery to Orange County. So why can’t we cap it off with a groundbreaking before the year is over?”

The last decade-plus was spent debating locations around Irvine’s Great Park, but efforts to join the state in building a cemetery for veterans remained mired in political gridlock and supporters turned to an empty 283 acres in Gypsum Canyon, which were already destined for cemetery use. New legislation was introduced to get the project approved by state leaders.

The Assembly has already approved a bill from Assemblywoman Sharon Quirk-Silva and this week the Senate Committee on Military and Veterans Affairs added its support.

Given the urgency clause included in the bill, Quirk-Silva said she hopes it could make it to Gov. Gavin Newsom for signing by this fall.

This week, the Board of Supervisors emphasized publicly they were committed to reimbursing the cost of the $700,000 study CalVet needs to proceed in Gypsum Canyon with the state cemetery.

The supervisors also approved the Orange County Cemetery District’s business plan for the first two phases of construction in the canyon and allocated $1 million toward burial sites in 10 acres that will be reserved for first responders. Another 20 acres will be dedicated to allied veterans who fought alongside Americans.

A dedicated cemetery honoring first responders with a final resting place is believed to be the first of its kind in the nation.

“We think it’s an important component of the entire cemetery experience,” Supervisor Don Wagner said. “This is not just veterans, but allied veterans; it’s not just military veterans, (but) first responders. It is those who have served us — this is a place dedicated to them.”

The county is also installing now a flagpole to mark the site. It will be visible from the freeway and entrance, and though it won’t be on the portion that is earmarked for the veterans cemetery, the supervisors said they intend it to be a signal of what’s to come.

Phase 1 of the Orange County Cemetery District’s business plan involves building infrastructure for both cemetery sites — 92 acres would be available for public use and 96 acres would be reserved for veterans — with the official designation, veterans would be eligible for burial benefits. The site preparations will include the entrance road and linking the utilities and electrical lines necessary for the operation of each site.

The second phase plan approved involves preparations for the public cemetery grounds such as the acres of laws for burials, the administration and maintenance facilities, a niche and a rose garden, parking and more. The two phases together could cost up to $44 million.

Though CalVet will design and build the veterans cemetery according to its own internal standards, the county’s Chief Real Estate Officer Thomas “Matt” Miller said the cemetery district’s infrastructure will provide a “landing pad for CalVet to come in.”

While CalVet will still have to officially zone the 96-acre plot for a national veterans cemetery, Chaffee, Wagner and Quirk-Silva agree they are finally moving full-steam ahead.

“Anything that is worthwhile can sometimes take twists, turns (and) amendments,” Quirk-Silva said, reflecting on their partnership. “And yet we still can come to a place that we can all be very proud of.”