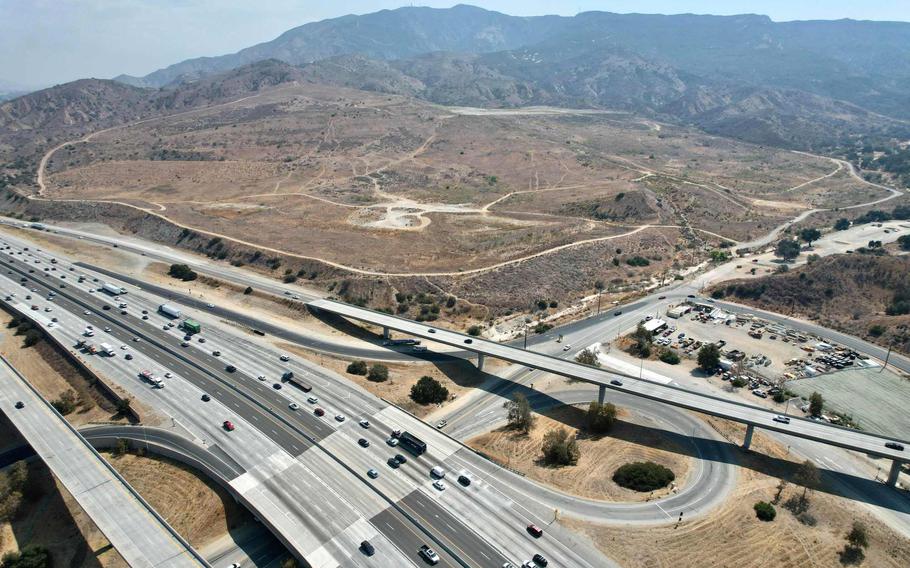 The proposed site for a new public cemetery and veterans cemetery is seen in Anaheim, Calif., on Sept. 24, 2021. (Jeff Gritchen/Orange County Register/SCNG)

(Tribune News Service) — Advocates for a state-run veterans cemetery in Orange County are feeling optimistic about an Assembly bill that has been advancing through the California Legislature.

It would allocate $700,000 for an acquisition study for a long-discussed dedicated resting ground for Orange County’s heroes, but wouldn’t box planners into one location — a problem in the past.

Assemblywoman Sharon Quirk-Silva and Assemblyman Steven S. Choi authored the latest bill. In the past, Quirk-Silva had shepherded through legislation for a location in Irvine, and then city leaders there spent several years bandying around spots and never coming to a consensus.

Veterans Alliance of Orange County, or VALOR, and local officials have since turned their attention to a high-elevation plot in Anaheim Hills’ Gypsum Canyon. The property is owned by the county and already planned for a public cemetery – a CalVet study of the land would ensure it’s a viable site.

Ahead of the bill starting its campaign Tuesday through the Senate’s Committee on Military and Veterans Affairs — it won unanimous Assembly support last month — Quirk-Silva hosted a press conference on its progress Friday at Heroes Hall in Costa Mesa.

“Where we are today is further along than we’ve ever been before,” Third District Supervisor Don Wagner said at the conference. “Today, we are on the eve of the next big step.”

Part of the final push for this cemetery will involve finding a compromise with Senator Tom Umberg who has a competing senate bill.

Though the two bills are similar, they reflect some distinct concerns. For example, Umberg’s bill specifically names Gypsum Canyon, yet Choi and Quirk-Silva’s leaves any site in Orange County up for consideration — in case a location change has to be considered again in the future.

Still, Quirk-Silva and Wagner said they feel cooperation is possible to get this project completed quickly.

Their cooperative spirit follows suit with the 34 cities in Orange County agreeing in the last year that the Gypsum Canyon site is the most promising location thus far.

“In Orange County, that is rare … to have that much energy behind one project,” Quirk-Silva said.

Orange County veterans began petitioning for a local cemetery in 2012. Two years later, Quirk-Silva drafted the first piece of legislation calling for the state to fund its construction. At that time, residents largely agreed that the so-called ARDA site on the former El Toro Marine Corps Air Station in Irvine’s Great Park was best suited for the project.

The Irvine City Council then ran in circles for several years, unable to reach a consensus on a final location.

When they realized Irvine was no longer a viable option, VALOR members began looking elsewhere, landing on Gypsum Canyon.

“It’s beautiful and a good resting place,” said Fourth District Supervisor Doug Chaffee. “We’ve earned the high ground, and we’re not getting off that hill.”

In December, a veterans coalition raised a giant American flag at a groundbreaking ceremony in Gypsum Canyon. Soon, they hope, their decade-long dream will become a reality.